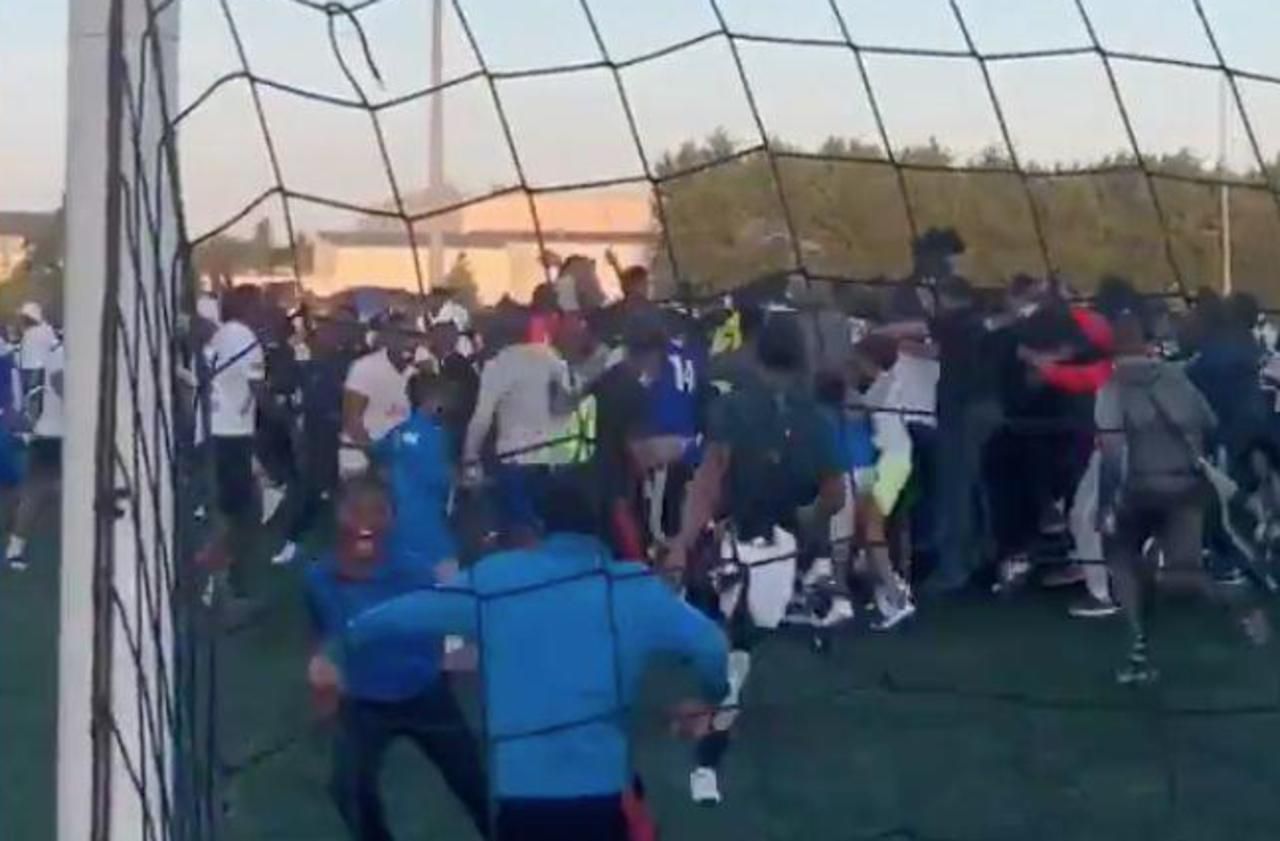 It was not until the 90th minute and additional time that the Tarterêts team crucified that of Grigny. 3-2, folded match. Kissing and outpouring of joy. In an atmosphere of jubilation worthy of a match for the French Team during the World Cup, a hundred supporters of the Tarterêts (Corbeil-Essonnes district) invaded the grounds of the Grigny Sports Park on Tuesday, around 8:30 p.m.

In the middle of a health emergency, this “wild” football match raises questions. While gatherings of more than ten people are still prohibited, just like outdoor team sports, at least 300 people – not masked – gathered at the stadium in the radar zone, renamed “Chakal Stadium” by young people from Grigny.

“We wanted to bring the two districts together”

The previous days, the meeting was sold as a shock by several “influencers” of the two cities on social networks. A poster of the meeting was even produced. One of these influencers, followed by several thousand subscribers under the pseudonym “lepoto2s”, justifies himself: “We talk a lot about Corbeil and Grigny, so we wanted to organize this match to bring the two districts together, we he explains. I’m an influencer, I made a lot of noise on the networks, so there were people. ”

VIDEO. 300 spectators gathered around a “wild” football match in Grigny

This resident of Grigny says he is aware of the health risk, but prefers to retain the “positive”. “It’s true, there is the Covid-19 and these rallies are prohibited, he admits, but it is the first time that the two largest districts of 91 can be put on the same ground without any problem.” This is unheard of! It may not have been the right time, but the organizers were overtaken by the event. ”

See Also:  Abelardo, a firefighter with a culé past

Among the two teams on the field this Tuesday evening, we find several CFA club players – including Sainte-Geneviève-des-Bois or Fleury-Mérogis -, but also a young hope from Grigny who recently signed up at the Clermont training center Football, in Ligue 2.

Not enough police to disperse the crowd

Another spectator of the match insisted on the absence of tensions during the meeting. “What worried us was not the world at the stadium, but rather that it degenerated into a history of neighborhoods,” notes Yee-moko, 30. In Grigny, we never really experienced confinement, there were people at the stadium every day, so that seemed normal to us. ”

According to our information, the police present in Grigny discovered the football match at the time. They weren’t enough to disperse the crowd. At the same time, at the other end of the department, urban violence mobilized numerous reinforcements in the city of Hautes-Mardelles, in Brunoy.

“We stay close, the order is to intervene only if there are clashes, says a police source. You can only observe from a distance, so as not to risk a provocation in front of you ”. Another policeman blows: “If it had degenerated between the two hottest districts of Essonne, we could not have managed”.

Tuesday evening, the party lasted after the match at the city of Tarterêts, in Corbeil-Essonnes. On social networks, we can see around sixty young people exulting around their stationary cars, between blows of horns and smoke.

See Also:  Illinois is a factor as the Big Ten race reaches the middle

This Wednesday, two matches were planned: one in Villebon-sur-Yvette, and the other in Massy. “If we let these matches be organized, it is no longer the same speech,” thunders Guillaume Roux, of the police union Unity-SGP. We cannot ask citizens to make efforts for two months, and forget about the barrier measures for these matches. ”

This Wednesday, the town hall of Grigny announces having filed a complaint for endangering the life of others. “The holding of this match is the most total irresponsibility that borders on stupidity,” enraged the mayor, Philippe Rio (PCF). The Evry-Courcouronnes public prosecutor’s office opened two “flagrant judicial inquiries” concerning two matches: one on Saturday evening in Evry and the other on Tuesday evening in Grigny.

These surveys aim to “identify all actors and organizers”. For the endangerment of others, the latter incur “a year in prison and a fine of 15,000 euros”, indicates the prosecution, which specifies that “the participants will be fined 135 euros”.

“In ordinary times, we welcome these meetings between neighborhoods because they advocate respect and are the opposite of violent clashes that can sometimes happen between rival gangs, notes the prosecutor of the Republic, Caroline Nisand. But right now, it is not possible. Prosecutions will be systematically initiated in the event of new violations of the obligations or prohibitions enacted within the framework of the state of health emergency. According to our information, several participants have been identified and were interviewed on Wednesday.

“Putting a fine and suing the organizers is not necessarily the solution,” continues the influencer of Grigny “lepoto2s”. On the contrary, we must be in dialogue, because this initiative of bringing together neighborhoods can inspire others in the future. ” Another match is already planned for this Saturday at the Grigny stadium. The “return” will take place in the Tarterêts district in the coming weeks.

VIDEO. PSG-Dortmund: crazy evening at the foot of the Park despite the coronavirus