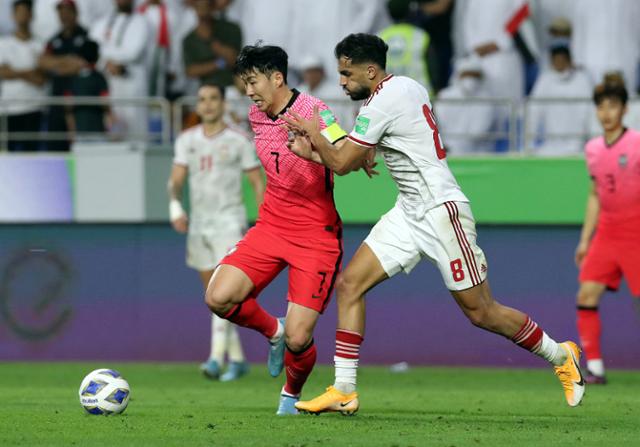 Son Heung-min competes for the ball during the match between the UAE and the UAE in Group A of the 2022 Qatar World Cup Asian final qualifier held at Al Maktoum Stadium in Dubai, United Arab Emirates (UAE) on the 29th. Reuters Yonhap News

In the final match of the 2022 Qatar World Cup final qualifiers, Bentuho failed to overcome the dense defense of the United Arab Emirates (UAE), who played Bae Bae, and lost unfortunately. After experiencing a painful defeat for the first time in a year, Bentuho finished the final qualifier schedule with homework in both karate.

The Korean national football team, led by coach Paulo Bento, lost to the UAE 0-1 in the away match of Group A of the Asian final qualifier for the Qatar World Cup kicked off at Al Maktoum Stadium in Dubai, UAE on the afternoon of the 29th (Korean time).

Although the national team has already confirmed that they will advance to the finals for the 10th consecutive World Cup, they have started playing with the ‘Best 11’ for an undefeated streak. The UAE was ranked 69th in the FIFA World Rankings, one step lower than Korea (29th). However, the UAE, who desperately needed a victory to advance to the World Cup playoffs (PO), did their best to the end and harassed Korea.

The UAE focused on defense throughout the game, and the few counter-attacking opportunities were scored. In the 9th minute of the second half, while the gap between the Korean defenders widened, Harip Abdala dug into the back space and waved the right goal net, eluding keeper Jo Hyeon-woo.

The Korean players who were blocked by the UAE defense seemed to be exhausted from their stamina due to their arduous schedule, and they were also frustrated in the attack. In the 45th minute of the first half, he fired five shots, but not a single shot on target. He also created 16 corner-kick opportunities, but failed to lead to a goal.

Meanwhile, the teams that Korea will face in the group stage of the World Cup will be decided in a group draw to be held at the Exhibition and Convention Center in Doha, Qatar at 1 am on the 2nd of next month.