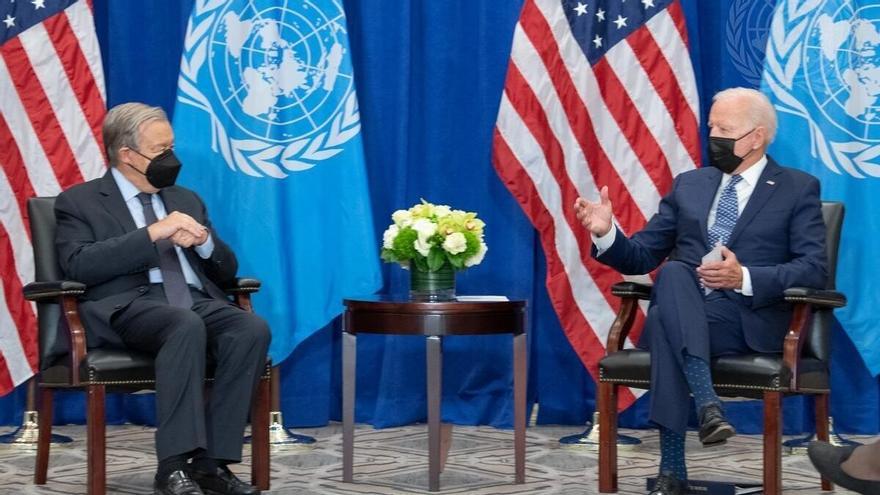 On paper the premiere of Joe Biden as president of the United States in the United Nations General Assembly It should be a moment of celebration, the return of Washington to a bet on the multilateralism and the diplomacy after four years in which Donald Trump verbalized in that same forum his disdain for both. The Democratic president, however, arrives this Tuesday for his first speech before the great annual world diplomatic meeting surrounded by skepticism behind the chaotic departure from Afghanistan, with a unprecedented open crisis with a historical ally like France, thigh tensions with China that have led the UN Secretary General, António Guterres, to warn of the risk of a “new cold war” and the harsh images that arrive from the border of the brutal treatment of Haitian immigrants.

Biden landed in New York on Monday and had a meeting with Guterres. In brief statements to the press, he repeated a phrase that he has made common since he arrived at the White House: “The United States is back “ and showed his faith “in the United Nations and its value” and stressed that “we can only respond with global solutions to the challenges we face today to finish Covid19 and deal with the gravest threat to humanity that we have seen, which is the climate crisis”.

It is a message that will be central to his speech which, according to sources from his Administration, will be centered on the proposition that the United States, with the departure from Afghanistan, “closes a chapter of 20 years of war and open one of intensive, effective and determined diplomacy defined by working with allies and partners to solve problems that cannot be solved with military force ”.

The words, however, come weighed down by reality. The abrupt announcement of the withdrawal from Afghanistan and its chaotic execution triggered discomfort among allies. The memory of the US blockade in May of a statement in the Security Council calling for an end to Israeli-Palestinian violence while Israel bombardeaba Gaza. And those and other elements, added to the diplomatic crisis with France, makes some think that, although Biden speaks of multilateralism, he also continues to act with the idea of ​​”America first” that Trump took to extremes.

Tension with Paris is at unprecedented levels since the US, UK and Australia announced by surprise last week the AUKUS trilateral agreement to stop China’s expansion in the Indian-Pacific region, a pact for the construction of nuclear submarines that it left on paper wet a contract for other Paris submarines with Canberra. France for the first time in its history has called its ambassador for consultations in the US and the French president, Emmanuel Macron, has decided not to attend the UN Assembly and not even sending his recorded speech, an intervention that he will leave in the hands of his Minister of Foreign Affairs, Jean-Yves Le Drian.

This has led to New York for now the criticisms of Biden of unusual harshness. “We thought that this kind of unilateralism, Act unpredictable, the brutality of the ad, the disrespect by a partner, they belonged to the past, “said the French foreign minister this Monday to the press in New York, before which he also pointed out that” perhaps there is less common territory than thought ”with the US.

The White House has asked the Elisha for a Biden’s phone conversation with Macron that should be held in the next few days but has not yet materialized. On the US president’s agenda this Tuesday, on the other hand, there is a bilateral meeting in New York with Australian Prime Minister Scott Morrison and another in the afternoon, back in Washington, with British Prime Minister Boris Johnson.

The tension also spreads beyond Washington and Paris. This Monday, in New York, the Council of Foreign Ministers of the European Union held an informal meeting after which Josep Borrell, High Representative, warned that the crisis “may affect relations with the US and Australia”. “It is not a French bilateral issue but affects the whole of the Union,” said Borrell, who expressed on behalf of the council “the clear solidarity with France”.

The UN, a fort

These tensions, as well as those that have increased between Washington and Beijing, from where Xi Jinping will also intervene this Tuesday but with a speech recorded on video., they thin the start of the debate in a General Assembly that has other complications. After being held almost entirely virtually last year due to the pandemic, the event again this year has a strong face-to-face component, but the persistence of the coronavirus threat it has turned the UN building into a blockhouse with very restricted access, even limiting the size of diplomatic delegations.

Steps are taken to try to prevent the meeting from becoming an event “supercontagator”But the UN, which requires many attendees immunization tests and use of masks, has decided to abide by a system of “honor” in the case of national leaders who come in person and the tensions and divisions of the world on vaccination will be more than symbolically exposed this Tuesday. As is tradition, the interventions are opened by the President of Brazil and Jair Bolsonaro has arrived in New York without having been vaccinated. He cannot go into the restaurants in the city but he will speak at the UN.