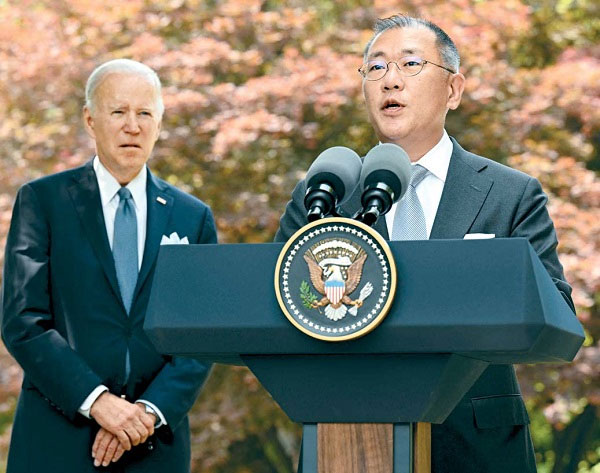 Hyundai Motor Group will make an investment of 10 billion dollars (about 12.7 trillion won) in the US by 2025. The Hyundai Motor Group is planning to launch new businesses in the North American finished car market by making additional investments in future new industries such as urban air traffic (UAM), robotics, and autonomous driving software (SW), including electric vehicles. Based on this, Hyundai Motor Group plans to solidify its brand position in the US market, which is called a battleground for automobiles, and quickly respond to the electrification paradigm shift promoted by the Joe Biden administration.

Hyundai Motor Group Chairman Chung Eui-sun announced the plan in English during a meeting with US President Joe Biden at the Grand Hyatt Seoul on the morning of the 22nd. Chairman Jung said, “In addition to the US$5.5 billion that will be invested in the construction of electric vehicle-only plants and battery cell plants, we will invest an additional US$5 billion in future new industries by 2025.” We plan to strengthen cooperation in various fields such as driving and artificial intelligence (AI),” he said. It is a follow-up investment following the $5.5 billion electric vehicle plant in Georgia announced the day before.

Hyundai Motor Group’s investment in the US, announced this time, totaled US$10.5 billion, which is US$3.1 billion more than the US$7.4 billion announced in May last year. The purpose is to not only preempt the rapidly growing electric vehicle market, but also to raise the brand’s position in the US market through preemptive investments in autonomous driving and UAM fields.

“With a new investment of more than $10 billion, Hyundai Motor Group will provide innovative products to American customers and contribute to the global challenge of carbon neutrality,” added Chairman Chung. Chairman Chung expressed his gratitude to President Biden and asked for support for Hyundai Motor Group’s US business. President Biden responded. “Hyundai Motor Group’s investment in electric vehicles and battery cells in Georgia will create more than 8,000 jobs, which is in line with the US government’s manufacturing revitalization policy,” he said. I think it will create jobs and provide various business opportunities to companies.” He continued, “I would like to thank Chairman Jung once again and will try not to disappoint him in order to repay this investment.”

The meeting between President Biden and Chairman Chung was originally scheduled for 10 minutes due to a tight schedule, but the conversation continued for about 50 minutes.

Hyundai Motor to invest $10.5 billion in US

Established an electric vehicle factory in Georgia, USA
$5 billion investment and operation in 2025
Active use of the bi-American policy

This investment by Hyundai Motor Group demonstrates the importance of the US market in the transition to electric vehicles and the new mobility market. The competition for electric vehicles and autonomous driving technology in the United States, sparked by Tesla, is intensifying as information technology (IT) companies such as Google and Apple are also participating in the war. Hyundai Motor Group is also investing $5 billion in urban air traffic (UAM) and robotics (robot + science and technology) to find new food. It is analyzed that there was also a sense of crisis that it was necessary to take the lead in the future mobility industry by actively participating in this competition.

The United States is a place where automakers around the world are competing for leadership in electric vehicles. Tesla, the world’s No. 1 electric vehicle maker, as well as General Motors (GM) and Ford are in the midst of developing electric vehicles. EV Adaptation, a market research firm specializing in automobiles, predicted that the eco-friendly car market in the US will grow from 850,000 units this year to 4.72 million units in 2030. Hyundai Motor Company has announced plans to sell 530,000 electric vehicles by 2030 and Kia 312,000 units.

The Joe Biden administration’s commitment to electrification is also strong. U.S. President Joe Biden has announced a policy to convert 50% of car sales to eco-friendly vehicles by 2030. The three American automakers, GM, Ford, and Stellantis, have already announced that they will actively participate in this policy. Hyundai Motor Group also announced on the 22nd that it would actively participate in the policies of the Biden administration. Kim Pil-soo, a professor of future automobiles at Daelim University, said, “If you succeed in the US market, you can succeed in the global market.”

Hyundai Motor Group’s investment in electric vehicles-only plants is also heavily influenced by the ‘Buy American’ policy. At the heart of the Buy American clause is ‘make things in America’. Starting from October 25, in the case of finished cars, more than 60% of parts must be made in the United States to be recognized as a US-made product. This standard will increase to 65% in 2024 and 75% in 2029. A product must be recognized as a U.S. product to receive various benefits such as tariffs and government subsidies. The U.S.-Mexico-Canada Agreement (USMC), which provides tariff-free benefits only when 75% of finished vehicle parts are produced locally, will also begin in July 2025.

This investment includes UAM, robotics, autonomous driving software, and artificial intelligence (AI). In particular, UAM and robotics are the fields that Chairman Jung has identified as future growth drivers. From the town hall meeting in October 2019, Chairman Chung said, “50% of Hyundai Motor Group’s future business is automobiles, 30% UAM, and 20% robotics.” UAM technology development is active in the United States. According to the National Federation of Entrepreneurs, 130 out of 343 UAM developers worldwide (38%) are located in the United States.

Hyundai Motor Group also established a UAM business corporation in the United States in 2020, and named it ‘Supernal’ last year. Supernull is developing with the goal of releasing an electrified UAM that can move in urban areas by 2028. It plans to introduce a fully electrified UAM model optimized for urban operation in 2028, and a regional air mobility aircraft that connects neighboring cities in the 2030s. Professor Kim said, “Korea is three years behind advanced countries in UAM and autonomous driving fields. In the United States, which is a ‘negative regulation’ (a method that allows all actions unless prohibited by law), the barriers to testing new technologies are lower than in Korea.

Robotics is also an area that Chairman Chung has a strong attachment to. At ‘CES 2022’ held in Las Vegas in January, the Hyundai Motor Group took up robotics as the theme, not cars. It was unusual for a robot to be the subject of a car maker’s stage. Chairman Chung said at the time, “Just like carrying a cell phone every day, one day people will carry a spot (Boston Dynamics robot) like a cell phone.”

Some are raising concerns about the automobile ecosystem, including the domestic parts industry, with the establishment of an electric vehicle plant in the United States. Regarding this, Chairman Jung said, “If you invest in the US, you should see that Korea will also increase.” This means that if the US investment is increased, the export of domestic parts makers and the production of finished vehicles can increase. He added, “If you invest abroad, you will inevitably have the effect of employment in Korea,” he added.

Ponzinibbio fell into another controversial decision loss and broke out: he left the octagon and shot at the judges

Shougang regrouped on the 23rd. Whether Xie Libin temporarily led the team to “righteousness” is still inconclusive – yqqlm