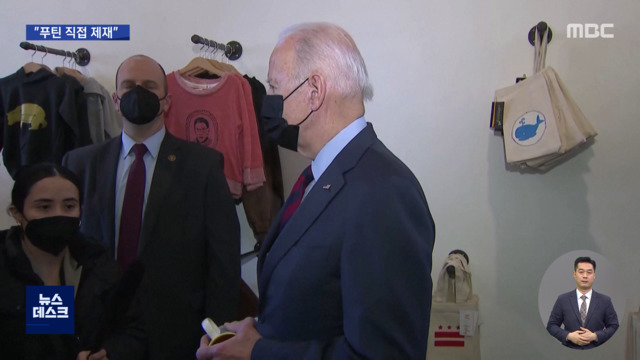 Tensions are rising as the conflict between the United States and Russia over Ukraine is confronting with a great power confrontation.

President Biden has warned of sanctions against Putin.

Russia did not care, and even conducted joint exercises with China to show off its armed forces.

A shop in Washington DC today.

When President Biden comes to buy a gift for his grandson, he begins to take questions from reporters about the Ukraine crisis.

There was an unusual response.

“Yes. It will. If he invades Ukraine, it will have serious consequences.”

He even mentioned the possibility of sanctions against the opposing head of state and put pressure on Russia at the highest level.

And he said that some of the 8,500 Americans waiting for sortie would be able to move soon, suggesting an early deployment.

The United States has also begun to come up with a plan to secure natural gas outside Russia for NATO allies, such as Germany, which depend on Russia for energy supply.

A Russian invasion was imminent.

At the same time as the pressure, the possibility of negotiations was left open, but Russia did not budge.

Two battalions of Russian fighter jets equipped with surface-to-air missiles showed off their might in the skies of Belarus, and ground forces conducted large-scale exercises on the border with Ukraine.

The Chinese and Russian naval flags flew at the same time from the warship above the sea.

“There is no impact on the negotiations. The conversation is over at this stage.”

Both the United States and Russia are confronting each other by all means available to each other without making any concessions.

While we remain open to the possibility of a diplomatic solution, it seems unlikely that an agreement will be reached.

This is Kim Soo-jin from MBC News from Washington.

Intensive recruitment in restaurants in view of deconfinement