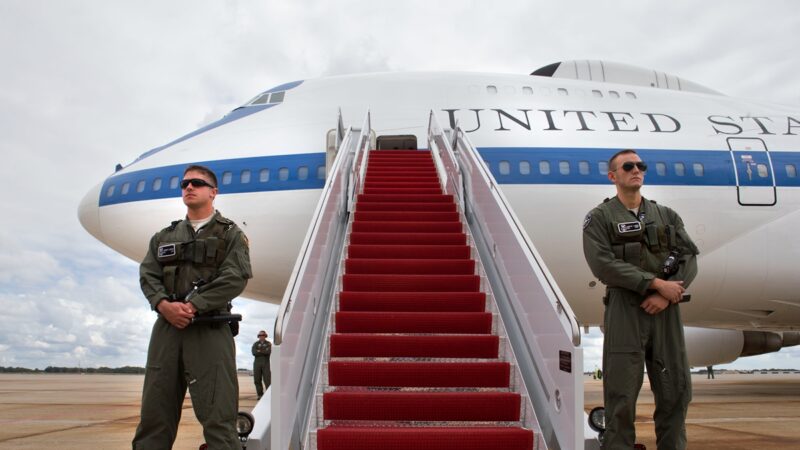 [NTDTV, Beijing time, May 23, 2022]At the President of the United StatesBidenWhen visiting Asia, it is called “the worlddoomsday plane“ofUS air command system(E-4B), publicly deployed to JapanOkinawa Kadena Air Base. South Korean military analysis, this is Biden’s warning to North Korea while visiting Asia.

South Korean media “Dong-A Ilbo” reported that the U.S. Air ForceE-4B aircraftIt took off from Andrews Base in Maryland on the evening of May 19 and arrived at Kadena Base on the afternoon of the next day (20).This is the same asBidenThe special plane Air Force One arrived in South Korea at almost the same time.

Usually when the President of the United States travels abroad, the E-4B is on standby in or near the visiting country in case of an emergency. However, public flight routes and destinations are rare.

E-4B is a special air command system designed by the U.S. military to deal with nuclear wars. Once a nuclear war breaks out, it can serve as a temporary command post for the U.S. president and military generals, commanding the U.S. Army, Navy and Air Force operations on the plane, and issuing orders such as nuclear weapons attacks.Moreover, it can defend against the electromagnetic pulses generated by nuclear explosions and protect electronic equipment, so it is also known as the “world”.doomsday plane”。

The report quoted South Korean military sources as saying that it is very rare for the U.S. president to expose the E-4B track during his overseas tour. According to military analysis, this is Biden’s response to North Korea’s nuclear test and the launch of intercontinental missiles during his visit to South Korea and Japan, as well as the warning issued by the US military to North Korea during Biden’s visit.

Before Biden’s arrival in South Korea on May 20, North Korea was reportedly preparing to launch an intercontinental ballistic missile (ICBM) and conduct a nuclear test. In order to curb North Korea’s provocations, the US military has not only publicly deployed “doomsday planes”, but also significantly upgraded its military alert to North Korea.

In addition, the US Air Force’s “Cobra Ball” (RC-135S) reconnaissance aircraft also flew over the eastern waters of the Korean Peninsula on May 20 to monitor North Korea’s military movements.

Biden’s trip is his first to Asia since taking office. After his visit to South Korea and Japan, he will also participate in the “Quad Security Dialogue” (Quad) summit between the United States, Japan, India and Australia to discuss the response to China’s military expansion and provocation.

When Biden held a joint press conference with South Korea’s new President Yoon Sek-yue, he emphasized that “there is a competitive relationship between democracy and totalitarianism”, and said that the Asia-Pacific region is the main battlefield.

An arrest warrant was issued for Anna in the Lottery Thip case. Send a representative to clarify tomorrow.