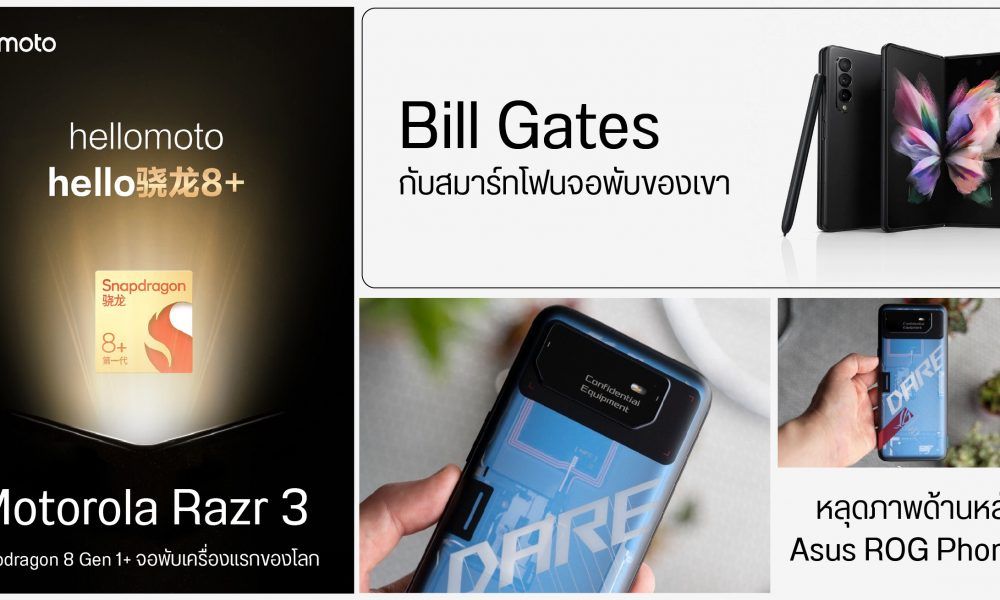 Bill Gates Microsoft co-founder announced he’s using last year’s best-selling foldable smartphone, the Galaxy Z Fold3. motorola reveals a new mobile phone poster with a chip Snapdragon 8+ Gen 1 is expected to be a folding screen mobile phone moto razr the new version, the latest gaming mobile phone. ROG Phone 6 has a picture of the device on the back showing a new design. and is expected to use the Snapdragon 8+ Gen 1 chip as well

Bill Gates and his foldable smartphone

Everyone thinks that the IT mogul like Bill Gates What kind of smartphone are you using?? Foldable mobile phone from Microsoft Surface Duo Probably the most plausible answer because Bill was one of the founders of Microsost, right? But the answer is wrong….

because one user asked Bill Gates in Reddit AMA (Ask Me Anything), which is a topic that Bill Gates often asks people to ask him about various things every year.that What smartphone are you using right now? and he replied He has tried many mobile phones, but ended up with the Samsung Galaxy Z Fold3. because it has a large screen to help him use it instead PC and mobile Plus, it’s easy to use, a nice camera, and has been keeping users updated for years.

Motorola The poster reveals the new flagship smartphone using the chipset Snapdragon 8+ Gen 1 which just launched a few days ago Although the poster does not say which mobile phone it is. But if you look at the bottom, you will see an image that looks like a folding mobile phone, emitting a light under the Snapdragon 8+ Gen 1 logo, and when it comes to foldable smartphones motorola will be left with only one possibility, which is The upcoming moto razr model is coming soon.

The most popular mobile gaming series, the latest ROG Phone, has leaked images of the new model. ROG Phone 6 appeared This time, it seems to have a different design from the previous model with a blue back cover with a circuit board pattern and the word “Dare” But I still don’t know if this is just a sticker to cover the actual design or not. Or is it a machine pattern like this?

But, of course, is that ASUS has announced that ROG Phone 6 will be a mobile phone that comes with a powerful chip like Snapdragon 8+ Gen 1 that has just been launched a few days ago… The official version has to wait for the next update.