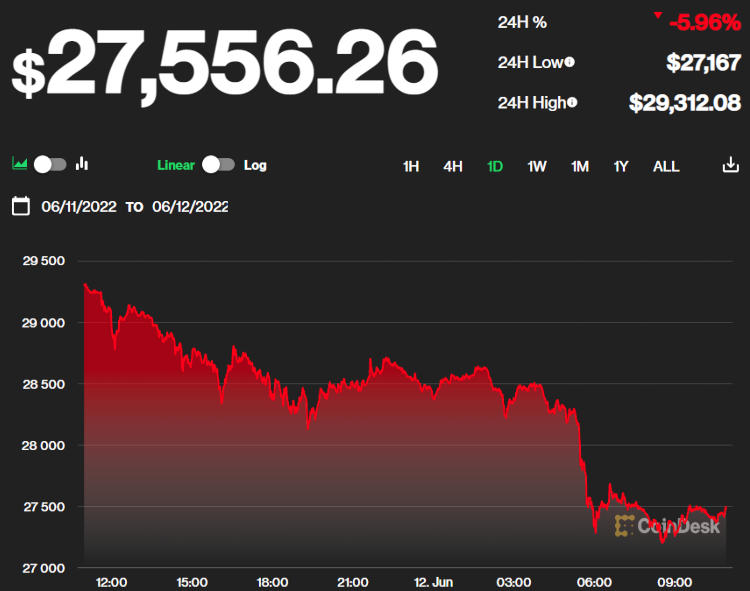 Over the past 24 hours, bitcoin has lost about 6% in price and fell below $28,000. Along with it, other cryptocurrencies were in the red zone: perhaps the Ethereum token got the most, which lost more than 12.5% ​​over the past 24 hours and rolled back to the level March 2021. According to one version, the record rate of inflation in the United States is to blame.

Cryptocurrencies as a means of investment are increasingly integrated into the traditional financial system, and with initially high volatility, they react to external shocks more than conventional assets. On Friday, the U.S. Department of Labor released a report according to which, by the end of May, the annual inflation rate reached 8.6% – the last time it was so back in 1981.

Accustomed to fluctuations, bitcoin at the time of writing is worth $ 27,556.26 – to this level it last dropped May 12that is, exactly a month ago, after which he overcame the psychological mark of $ 30,000 several times and again rolled back way down. The market capitalization of the world’s largest cryptocurrency decreased following its quote and amounted to $523.8 billion. Since the beginning of the year, bitcoin has already lost more than 40% in price, and its further dynamics is difficult to predict.

assault and “partial triumph” of Russian troops in Severodonetsk

It attracts attention as the flame is extinguished from a certain boss in “Elden Ring”. Other secret changes that come out-AUTOMATON