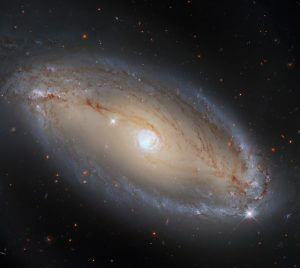 This is about 130 million light-years away in the direction of “Libra”The Milky Way Galaxy “NGC 5728”is. The swirl arm with countless young, hot blue stars shining and the NGC 5728 with its central part shining brightly surrounded by the swirl arm seems to be staring at us in the eyes of someone floating in the void.

According to the European Space Agency (ESA), the core of NGC 5728 emits strong electromagnetic waves from a narrow range.Active galactic nucleusKnown to be (AGN: Active Galactic Nucleus), NGC 5728 is a type of active galactic nucleus.Seyfert type 2It is classified into.The driving force of active galactic nucleiSupermassive black holeBelieved to be, at the heart of NGC 5728About 34 million times the sunIt is believed that there is a black hole with a mass of.By the way, the mass of the supermassive black hole, which is said to exist in the center of the Milky Way galaxy, isAbout 4 million times the sunTherefore, the NGC 5728 has a black hole that is 8 to 9 times heavier than that.

According to ESA, some active galactic nuclei shine brighter than the entire galaxy.quasarIn some cases, it is almost impossible to observe the galaxy itself that houses the active galactic nucleus.On the other hand, the core of NGC 5728, which is a Seyfert galaxy, is different from quasars, as shown in the image.The galaxy itself can be clearly observed with visible and infrared wavelengths.but,At another wavelength, strong electromagnetic waves are observed emitted from the core.It’s called. In order to understand the true nature of celestial bodies, visible light, infrared rays, ultraviolet rays, radio waves, X-rays, etc.Observation using various wavelengths of electromagnetic waves(Multi-wavelength observation) is very effective.

The image at the beginning is“Hubble” Space TelescopeCreated from visible and infrared observations from the Wide Field Camera 3 (WFC3), this week’s Hubble Space Telescope “More than Meets the Eye” (hidden facts, more than it looks) ), Published by ESA on September 27, 2021.

The “face” of Mars is not limited to human face rocks.Happy face crater with a smile
The swirl is dark and pale as if hidden “IC 342”
Cassini captures the effects of the “groove” and “twist” satellites of Saturn’s ring