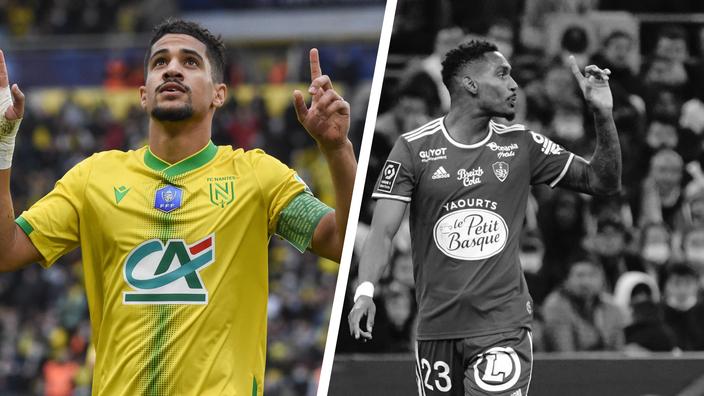 The XXL performance of Blas, the first interesting match for Satriano, the Brest feverishness in defense… The tops and flops after Nantes-Brest (2-0) this Friday.

Ludovic Blas sees double
As since the start of the season, Ludovic Blas is the man in form on the side of FC Nantes. We saw him in full confidence, attempting (and succeeding) fabulous gestures which should not have lowered his rating on the transfer market, a few days before the end of the winter transfer window, quite the contrary… With these two magnificent goals, the captain of FC Nantes brings his total to 10 achievements this season, thus becoming the top scorer of the FCN for the 2021-22 financial year.

Quentin Merlin, Mr Clean
Offensively and defensively, Quentin Merlin was perfect. In his left lane, the 19-year-old French defender impressed with his performance and technical accuracy. A veritable electric battery, he chained races on the left side and even rewarded us with some devilishly effective technical gestures. Surely one of the best matches of the young Canary. A good omen for the future…

Successful first for Martin Satriano
Arrived this winter (on loan) from Inter Milan, the young Martin Satriano delivered a rather interesting performance, which should delight Brest supporters. The Uruguayan striker showed a lot of desire and was responsible for most of the Brest chances. He even distinguished himself in the defensive withdrawal, always driven by this rage and this desire to recover balls.

A defense far too feverish
It was far too easy for Nantes. Deprived of several executives, including Romain Faivre, moreover announced with insistence on the side of Lyon, Brest did not create enough danger offensively and especially paid for his indolence behind. Jostled by the start of the match canaries of the Canaries, the Brest defense very quickly took on water, and logically conceded the opener from the 25th minute of play. Overwhelmed by the offensive power of FC Nantes, the defenders of Stade Brestois have left too many spaces behind.

Changes too late?
Given the face of the match, we can regret that Michel Der Zakarian waited for the hour mark and the second goal from Ludovic Blas (53rd) to make changes. As we saw, after the exit of Cardona, Satriano and Agoume, Brest regained color and had much better chances than in the first period, but it was too late.

Social Security: My domestic worker has covid: steps to follow to process the withdrawal