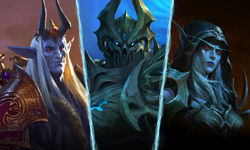 The Season 4 of Shadowlands will start next week. In an article posted online a few moments ago, Blizzard details the content that will be available during this one. Find it now below.

The power of the Founders has affected all of Shadowland since the great battle of Zereth Mortis. The raids you know, and the rewards they provide, have been bolstered by his influence. Each week, one of the three raids of Shadowlands and associated non-instance bosses (Castle Nathria, Sanctum of Domination, or Founder’s Sepulcher) will become fateful. Non-instance bosses associated with raids Shadowlands are :

A fateful week of Castle Nathria will spawn only one of these bosses.

Sepulcher of the Founders

Confront Sylvanas Windrunner at the Shrine of Domination

Defeat the Jailer in the Sepulcher of the Founders

How do Fate Raids work?

Each week will turn a different raid into the fateful raid. You can join a fateful raid on any difficulty (Raid Finder, Normal, Heroic, or Mythic). The classic version of a raid is not available while it is fateful, and you will have to wait until the following week for the fateful status to be applied to another raid. Plan your attempts at transmogs and achievements well.

In fateful raids, the stats of enemies and bosses are readjusted. The goal is not to force you to relearn everything from scratch, but to offer you a solid challenge without being insurmountable if you already know the course of the raid.

Each boss has been assigned a unique fateful power from a list of four. This power changes with each boss and each week to challenge your raid groups. You can thus win fateful infusions, powerful temporary auras. The rewards earned from defeating a boss in a fateful raid differ depending on the difficulty level. You can get the following items:

All gear obtained in Fate Raids can be converted into pieces of armor at the Catalyst of Creation.

Shadowlands Season 4 lets you encounter a trio of suspicious NPCs near the Great Vault. The latter offer for sale several objects related to the three raids of Shadowlands : jewelry, weapons and special items from all three raids. All items will be the same price: get them in exchange for a enigmatic cartel dinar. You can get Enigmatic Cartel Dinars in any Season 4 Fate Raid, by completing the required three-part quest. But be careful, you can only get three Enigmatic Cartel Dinars during the whole season.

When you’ve spent your last dinar, the NPCs will leave town and take their finds with them. The items they sell are, like all Season 4 items, fateful Normal level 278-285, depending on the item.

Unlike the enigmatic Cartel Dinar, you won’t need to complete a quest to get the secret codes; you can get them from the start of Season 4 by defeating bosses. You will therefore be able to reap the fruits of your efforts from the start. Secret Codes can be used to upgrade all items marked “fatal,” including those purchased from the shady vendors mentioned above.

You can get new rewards by completing the following Feats of Strength during Season 4:

A new rotation of Mythic+ Dungeons is coming in Season 4. New Keystone Keys unlocked in Shadowlands Dungeons will grant access to the following dungeons:

The Operation Mechagon dungeon is making a comeback in Season 4

Nathrezim have infiltrated the dungeons disguising themselves as common enemies. Stay alert to spot any flaws in their costume. If you manage to defeat impostors, a member of the Ta Cartel will come and capture them and offer you several bounties in exchange to increase a secondary stat of your choice. You will also receive a quick bounty that will boost your life and mana.

You can get the following rewards by completing Keystone Dungeons in Season 4:

Deathmarch Restoration Mount, one of the Mythic+ rewards of Season 4

The new PvP season will allow all heroes of Azeroth to try their luck and cover themselves in glory in the Arena or on the battlegrounds. The maximum item level for Honor and Conquest gear has been changed.
Honor Gear (Eternal Fighter)

For Season 4, we mostly wanted to focus on new gear and the transformed dungeon and raid experience, as well as PvP. Modifying Shadowlands’ already known systems would, in our opinion, defeat this purpose, so we’ve decided not to modify these systems so that you can fully enjoy the experience.

Season 4 was a unique opportunity for the WoW development team to attempt experimental changes that would have been too unstable for a regular season. We hope you enjoy playing it as much as we enjoy developing it. See you soon in the afterlife!