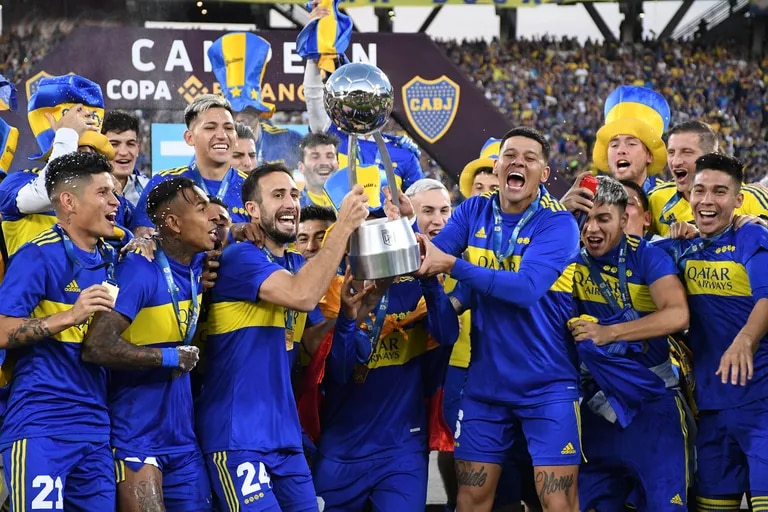 With goals from Rojo, Fabra and Vázquez, he thrashed Tigre 3-0 in Córdoba and won the League Cup. He is the 72nd star of the Ribera club in its history.

Luis Vázquez, with a header, sentences the final in Córdoba. Xeneize thrashed Tigre 3-0.

Sebastian Villa started the counter. It was 3-0, but the Colombian made a mistake and instead of playing with Benedetto he played it personal. His shot is lost in Tigre’s defense.

Frank Fabra, with a strong shot from outside the area, scored the 2 to 0. A tremendous goal, which allowed the Xeneize team to cool down Tigre’s emotional momentum, which lurked and was approaching equality in Córdoba.

Retegui loses the tie in an incredible way. He hooked the ball with his left boot against a beaten Rossi and the ball just missed the post.

Xeneize gave up the ball and Matador is getting closer to equalizing. Retegui, first with his left foot and then with a popcorn, almost scored the 1-1.

El Matador tries to equalize and approaches Boca’s area. But the xeneize defense is very firm and so far Rossi is not required.

Benedetto took Villa down perfectly at the door of the area. The Colombian’s shot hit a rival and went to the corner.

The second stage began in Córdoba.

At the end of the first 45 minutes, Boca defeated Tigre 1-0 in a boring final, where the intensity and the noise so far beat the good game. In addition to the goal, the clearest ones were Villa’s free kick and Pipa Benedetto’s goal, well annulled.

At the end of the first half, a header from Rojo failed to be stopped by goalkeeper Marinelli and it became 1-0 for Boca over Tigre.

Boca and Tigre find it hard to take over the game. The ball is distributed between one area and the other and the final is being won by boredom.

In the first good collective play, the Matador stepped on the area. The shot was deflected to the corner and everything was diluted.

Neither Boca nor Tigre managed to step into the area with real chances of converting. The defenses, well stopped, explain the 0 to 0.

Tigre looks for the chance to approach Rossi with danger, while Boca had the two clearest of the game.

Darío Benedetto defines with enormous category, but the VAR confirms what the assistant referee Yamil Bonfá had initially marked: that his left arm was in a forward position.

Marinelli flies and just deflects Villa’s free kick that was destined for the net.

Even without being able to connect their lines, Boca focuses on the power of their individualities. Salvio’s speed, Benedetto’s hierarchy and Villa’s punch.

With a very active Retegui, Tigre corners Boca against his bow. After a corner, Cabrera headed alone, just wide.

Boca and Tigre are already playing the grand final of the League Cup in Córdoba.

Less and less is missing for Boca and Tigre to define the champion of the League Cup. Boca fans unfurled a World Cup flagwith Maradona, Riquelme, Bilardo and Messi.

Ulises Bueno provides the music, in the preview of the final between Boca and Tigre.

Boca and Tigre players warm up on the pitch at Mario Kempes. There is less and less to go before the final begins.

Víctor Cabrera assures that Tigre will maintain the style that characterized the team in the tournament. “We are going to go out looking for him like always, like every game,” he said.

Whoever wins this afternoon’s final will be guaranteed a place in the Copa Libertadores 2023. In addition, he will play Champions Trophy in November against the champion of the next League Tournament.

The people of Tigre also make themselves felt at Kempes.

An hour before the start of the grand final, the color and heat are evident in the stands filled with the Boca public.

Former midfielder Mauricio Serna, a new addition to the Football Council, spoke in the preview of the final with ESPN. “Boca always plays finals. You are used to playing finals. In this club you don’t have time to celebrate. The players are psyched up to win today. And from 6:30, 7 in the afternoon they are going to think about Thursday’s match, which is another final”, he declared.

Boca and Tigre starred in the final of the 2019 Super League Cup three years ago. Then, also in Córdoba, Matador defeated Xeneize 2-0 with goals from Federico González and Lucas Hanson.

Welcome to minute-by-minute coverage of the League Cup grand final between Boca and Tigre. I am Pablo Lisotto and I will be accompanying you this afternoon, with everything that happens at the Mario Kempes stadium in Córdoba.

TODAY, personality test | Psychological test 2022 | The hand or the birds? Tell us what you see first in the image and discover if you are idealistic | vision test | viral test | viral challenge | MEXICO

Musk detonates a new surprise in the “Twitter” deal… Will it end in failure?