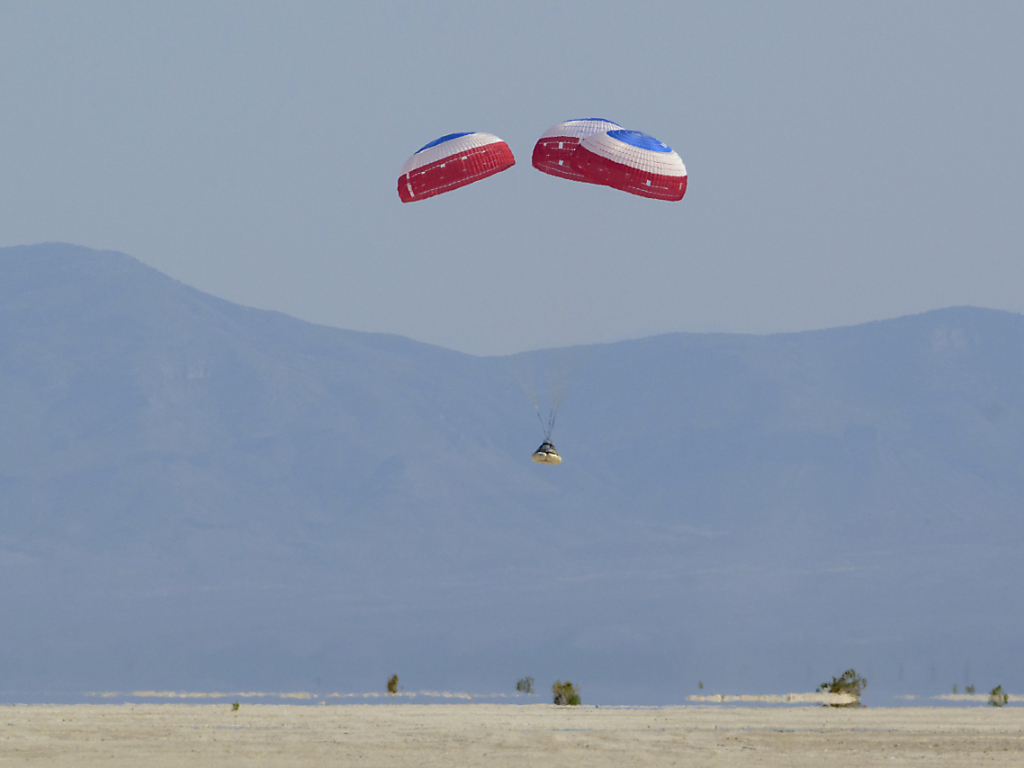 Starliner, Boeing’s space capsule, landed on Wednesday evening, successfully concluding a crucial test mission for the company. She wants to prove her ability to transport NASA astronauts to the International Space Station (ISS).

The capsule, which has no passengers on board, landed in the desert of the American state of New Mexico, at the White Sands base, at 4:49 p.m. (00:49 a.m. Thursday in Switzerland). “A nice landing at White Sand tonight,” said a commentator on the NASA video broadcast.

Its descent had been braked by its entry into the Earth’s atmosphere, then by large parachutes, and contact with the ground was cushioned by large airbags.

The stakes were immense both for Boeing, which has been trying to make this test flight a success for years, and for NASA, which has invested several billion dollars in the development of the spacecraft. In the future, it wishes to hire its services to transport its astronauts to the International Space Station.

The safe landing allows the American aeronautical giant to finally conclude a successful mission from start to finish, after a failure in 2019. And at the same time to restore its image a little, after being overtaken by SpaceX, whose capsule has already served as a NASA taxi since 2020.

Starliner’s hatch had been closed Tuesday by astronauts aboard the ISS. She brings with her 270 kg of cargo, including reusable oxygen tanks, which will be filled on Earth and returned to orbit later.

Starliner took off from Florida last Thursday, and docked with the ISS for the first time the next day. In recent days, many tests have been carried out to verify the proper functioning of the vehicle once connected to the flying laboratory.

But the success of the docking on Friday, in particular, had represented a real relief for Boeing, after a first attempt in 2019. Starliner had at the time had to turn back earlier than expected, before managing to reach the station. The landing hadn’t been a problem.

After this first failed mission and a long period of adjustments, the test flight was to be retried in August 2021. But when the rocket was already on the launch pad, the capsule’s valves were blocked at due to a humidity problem. The ship had had to return to the factory for repairs – for ten months.

This time, the flight to the ISS went well, despite a few hiccups, in particular a problem detected in the propulsion system: two of the 12 thrusters used by the capsule to place itself on the correct trajectory after take-off did not worked. However, NASA and Boeing officials were reassuring about the importance of the incident.

The capsule had also docked late, due to a technical problem with the device allowing it to attach to the station. Problems that remain minor, compared to previous pitfalls.

After this mission, a second demonstration flight, this time with astronauts on board, will have to be carried out for the spacecraft to obtain NASA certification.

Boeing hopes to achieve this by the end of the year and then start regular missions to the ISS. But the exact timing will depend on the analysis of Starliner’s performance in recent days.

The US space agency has signed fixed-price contracts with both SpaceX and Boeing.

By using two companies, it wants to diversify its options, so as to never again risk finding itself without American means of transport, as after the shutdown of the space shuttles in 2011. Until SpaceX, NASA was indeed reduced to pay for seats on Russian Soyuz rockets.

Elon Musk’s company, yet a newcomer to the aerospace industry compared to Boeing, has already transported 18 astronauts to the ISS with its own capsule, Dragon – as well as four private passengers, during a space tourism mission.

A campsite that deserves to be known

Upset Being Expelled While Playing with Children, Atta Halilintar is Recorded Furious and Hits Aurel Hermansyah