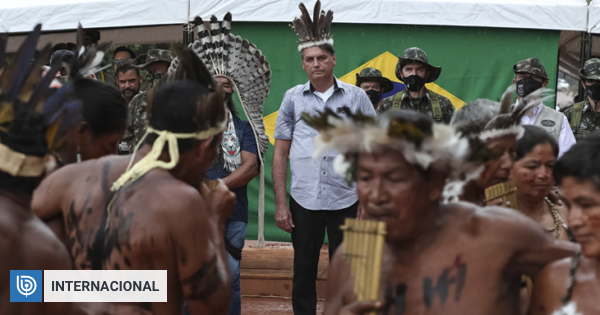 Brazilian President Jair Bolsonaro published a video this Sunday in which he promises Yanomami indigenous leaders “that there will be no mining” on their lands if they do not want to, amid reports of invasions and attacks by illegal miners on their reservation.

“If you don’t want mining, there will be no mining. There are other indigenous brothers in other places, inside and outside the Amazon, who want to do mining, who want to cultivate the land, and we are going to respect their wishes, ”says the president in the video.

The recording was made last Thursday during the meeting he held with Yanomami leaders, the first as head of state in an indigenous reservation, in the framework of the inauguration of a bridge in Sao Gabriel de Cachoeira, in the state of Manaus (north) .

“We would never pass a law (for) the land to be exploited by whoever it is. That will never happen (…). In the project that is there, the ethnic group that wants to exploit, exploits, whoever does not want will not be exploited, “he said, referring to a bill prepared by the government to regulate mining on indigenous lands.

Since 2020, the Yanomami indigenous people have been warning about the situation of extreme tension in their reserve, the largest in Brazil, with 96,000 km² (divided between the states of Roraima and Amazonas) and with some 27,000 indigenous inhabitants.

Indigenous and environmental organizations denounce that land invasions are partly encouraged by Bolsonaro’s speech in favor of the exploitation of their areas.

At the meeting, the president promised the Yanomami that the Brazilian Army will enforce their rights, although he did not refer at any time to the attacks by illegal miners.

Illegal mining, one of the main causes of environmental destruction in the Amazon rainforest, expanded by 30% in 2020 in Yanomami lands, devastating the equivalent of 500 soccer fields, according to a report published in late March by the Hutukara Yanomami Association (HAY).

For several weeks, indigenous people in the Yanomami and Mundurucu territories (Pará, north) have denounced violent attacks by illegal miners, which last week motivated a judge of the supreme court of Brazil to order the Bolsonaro government to take “ the necessary measures ”to protect them.