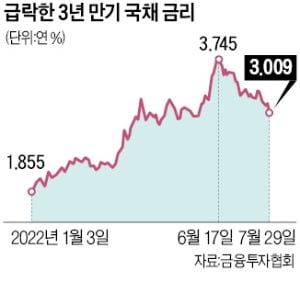 Treasury bond yields are falling sharply. The yield on the 3-year government bond, which exceeded 3.7% in June, has been pushed down to the 3% level. Although the Bank of Korea has taken even a big step (a 0.5% point increase in the base rate at a time) to catch inflation, the government bond yield is on the verge of entering the 2% range per annum. Analysts say that the bond market is already betting on a recession.

According to the Financial Investment Association on the 31st, the yield on the 3-year government bond, an indicator of the bond market, fell 0.121 percentage points to 3.009% per annum on the 29th. In the middle of the day, the 3% per annum line collapsed. Compared to the high point recorded on June 17th (3.745% per annum), it decreased by 0.736 percentage points. In terms of bond prices, it has soared about 20%.

The yield on the 3-year government bond started trading at 1.855% per annum this year. After that, it surged due to high inflation and monetary tightening by the US central bank (Fed) and the Bank of Korea, but recently turned to a downward trend as concerns about an economic recession emerged. “It is certain that exports and consumption, which supported the Korean economy in the first half of this year, will be sluggish in the second half,” said Moon Hong-cheol, a researcher at DB Financial Investment.

The sharp drop in yields on government bonds in South Korea and the US is due to concerns about an economic downturn. The US central bank (Fed) and the Bank of Korea are raising the benchmark interest rate to combat inflation, but the bond market believes that the bond market may soon have to stop raising the base rate or lower it due to concerns about an economic downturn.

Right now, the US economic growth rate (compared to the previous quarter) recorded -1.6% on an annualized basis in the first quarter of this year and -0.9% in the second quarter. If the US economic circle continues negative growth for two consecutive quarters, it is considered a recession. The long-term and short-term interest rate inversion, which is interpreted as a sign of an economic downturn, has already appeared since last April. On the 29th (local time), the 10-year U.S. Treasury yield was 2.658% and the 2-year yield was 2.8905%. Bonds with longer maturities usually have higher interest rates. However, when concerns about an economic downturn rise, long-term yields on 10-year bonds fall, while interest rates on two-year bonds, which are sensitive to monetary policy, show an upward trend or fall relatively less, inverting long-term and short-term yields.

In Korea, from June 10 to July 28, the 3-year government bond yield was higher than the 30-year yield for over a month. Kim Seung-hyeok, an economist at NH Futures, said, “The inversion of the 3-year and 30-year bonds was released in the previous chapter (July 29), but it is difficult to attach great significance to it. said.

The fact that the ‘inflation peak theory’ is weighted is also a factor in the decline in government bond yields. Deputy Prime Minister and Minister of Strategy and Finance Choo Kyung-ho recently said, “I think the price will peak around the end of September or October at the latest.” If inflation slows, the BOK is more likely to slow down the rate hike.

The European bond market is also reflecting concerns about an economic downturn. Germany’s two-year government bond yield, which stood at 1% a month a month ago, has fallen to 0.273% a year now. The difference in yields on 10-year government bonds between Germany and Italy widened to 2.4 percentage points. It is the highest in more than two years since May 2020. When the economy stagnates, market funds flow to the relatively safe German government bonds, widening the interest rate gap between the two countries.

“The impression of being the most hated man in the world”