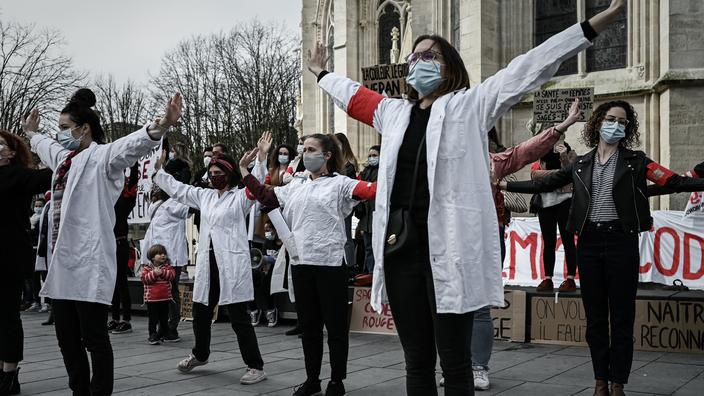 These revaluations will be included in the Social Security budget for 2022 and will represent an additional expenditure of 40 million euros per year.

Midwives working at the hospital will receive from January a bonus of 100 euros net and a salary increase of about 100 euros gross per month, announced Thursday the Ministry of Health. These revaluations, which will be included in the Social Security budget for 2022, were unveiled Thursday evening by Olivier Véran, during a meeting with the midwifery unions.

Read also“Mothers and babies in danger”, midwives sound the alarm for this summer

They will represent an additional expenditure of 40 million euros per year, the minister’s office told AFP. Three quarters of the 23,500 midwives will benefit from it, for a monthly gain equivalent to the increase of 183 euros net already granted to all hospital staff at the end of 2020 as part of the “Ségur de la santé”.

A sort of catching-up for the profession, forgotten by the overhaul of salary scales negotiated for nurses and nursing aides, among others. “Midwives may have felt left out”, recognizes the entourage of the minister. In fact, these caregivers have already taken to the streets five times since the start of the year, to demand recognition and staff. However, not all of their demands were met.

Their request for a status “tailored” was thus ruled out, Olivier Véran preferring “To consolidate their medical status within the hospital public service”, especially through this “Significant revaluation”. Their skills will nevertheless be extended to new areas, such as endometriosis, and the ministry intends to facilitate the creation of “Birth houses” managed by midwives.