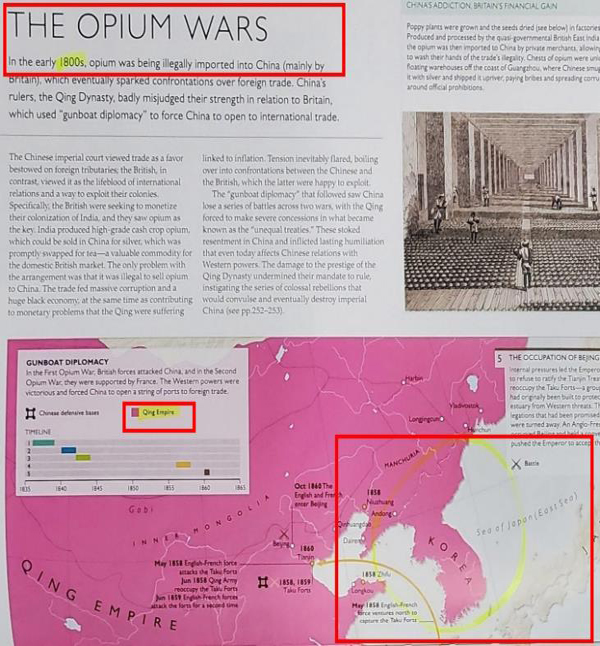 It has been found that the descriptions of Korean history and culture in books published by famous British publishers Dollin Kinders DK and Collins are full of errors.

On the 23rd, the cyber diplomatic mission VANK obtained the publications of DK and Collins and investigated the contents of errors.

Vank said that it had delivered the correct information and materials to the publisher along with a complaint email.

However, based on historical facts, “Goguryeo, Baekje, and Silla existed before 313, and Silla was unified by destroying Goguryeo in 668” and “Joseon was founded by Lee Seong-gye in 1392”, respectively.

On page 312, the description of the Korean War made an error of stating that the date of the outbreak of the war was ‘June 24, 1950’ and that its nature was ‘one of the many proxy wars between the US and the Soviet Union’.

This atlas was ranked #1 in the top three books on Amazon, an online bookstore recommended for middle and high school students, and over 4,100 reviews.

In ‘Records by Year: A History of the World from the Stone Age to the Digital Age’, published by DK as a series for elementary school students to middle school students, “There were 24 letters and vowels at the time of publication of Hangeul (28 at the time)”, “Germany A similar metal-type printing technique was invented by China in the 11th century before Gutenberg.”

Regarding the 2018 inter-Korean summit, the publication stated that “South Korean President Moon Jae-in crossed the border for the first time.”

The ‘Children’s Illustrated History Book’ published in 2018 abruptly attached the Taegeukgi image while explaining the unification of the three kingdoms of Silla in 668, and used a map marked ‘Sea of ​​Japan’ to introduce the ancient Korean Peninsula.

The English notation ‘Korea’ was derived from Goguryeo, and the capital of Baekje was the present-day Gwangju Metropolitan City.

In general, ‘Korea’ is known as an expression derived from Goryeo.

Wiryeseong, the capital of Baekje, is not the present-day Gwangju Metropolitan City, but is located near Gwangju-si, Gyeonggi-do.

Collins’ published ‘Collins World Atlas: Illustration Edition’ (2021), with the exception of the East Sea and Sea of ​​Japan flags on page 75, all were exclusively marked with the Sea of ​​Japan (13 pages, 60 pages, 62 pages, 150 pages), and Dokdo is marked as ‘Liancourt Rocks’.

‘Liancourt Rocks’ is named after the French whaling boat that discovered Dokdo, and has been criticized for meaning that it denies Korea’s sovereignty over Dokdo.

Park Ki-tae, the head of BANK, said, “We cannot continue to let distortions and absurd explanations about Korea in the books published by DK and Collins continue.”