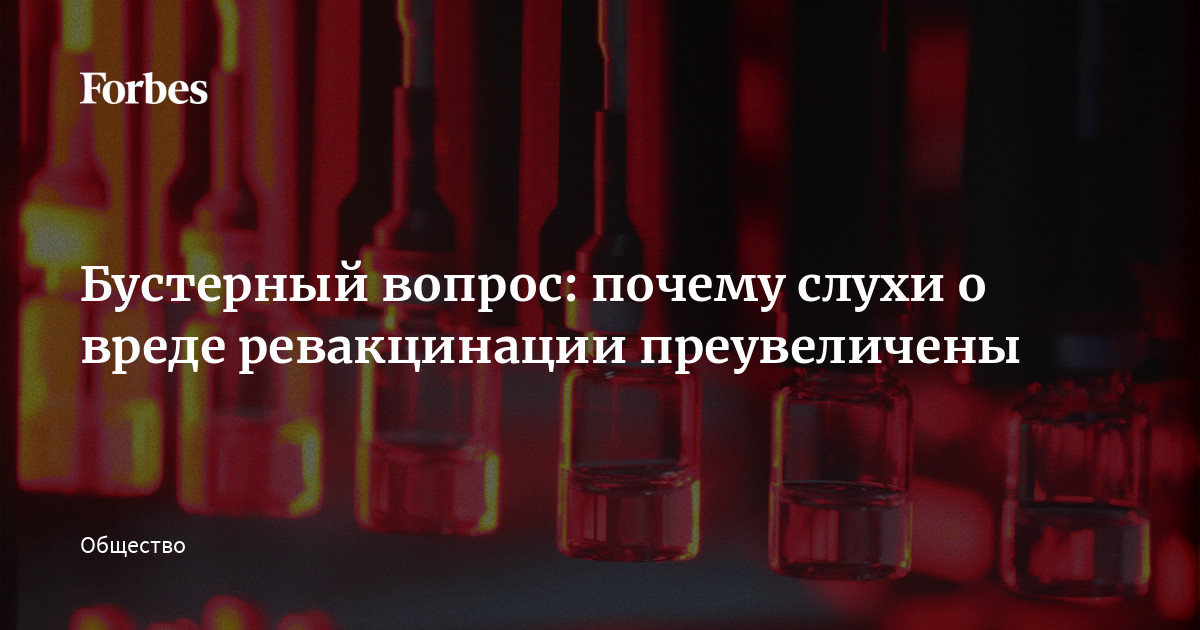 Myself text in the journal – not an original research work and not a meta-analysis of other works: this is a discourse on the topic, supplied with a number of references. Actually, the title of the article “Considerations in boosting COVID-19 vaccine immune responses”, that is “Considerations about the immune response after booster vaccination against COVID-19” – directly indicates that there is no new data in it, only thoughts about it. Moreover, these thoughts are expressed in a very peculiar way.

Despite the fact that there are many reasonable arguments in the article, and the general message does not raise questions (convincing data that in countries where at least a significant part of the population was inoculated with two doses, a booster is required, no), some arguments are selected so that you want to go with them immediately argue. For example, already in the fourth paragraph, the authors mention possible unwanted side effects from vaccination, namely myocarditis and Guillain – Barré syndrome. You don’t need to be a media connoisseur to understand that the appearance of the word “vaccine” and the scary-sounding complications in one sentence will cause a wave of publications about the dangers of the booster.

Meanwhile, the aforementioned paragraph of the article seems to have been formulated rather vaguely on purpose. I will translate it close to the text. “Although the benefits of primary vaccination clearly outweigh the risks if large-scale booster vaccinations are given too early or too often, especially with vaccines that can provoke immune-mediated side effects (such as myocarditis, which is more common after a second dose of mRNA vaccines, or Guillain-Barré syndrome, which is associated with adenovirus vaccines), additional risks may arise. If the use of unnecessary booster vaccinations causes serious adverse reactions, the potential consequences of this in terms of overall vaccine uptake could extend far beyond the covid story. So booster vaccination should be widely used only if there is evidence that it is appropriate. “

In the above paragraph, there are several distortions and hidden logical errors at once. The most obvious – the authors mention vaccine-associated side effects, but:

a) do not specify their frequency, but these are rare and very rare phenomena;

b) they forget to say that the same side effects are caused by the covid itself, only much more often;

c) myocarditis – inflammation of the heart muscle – sounds scary, but in reality it is usually a mild ailment that a person may not even know about.

There is no evidence, or even hint, that a third or fourth dose of the vaccine will increase the incidence of these side effects. But the authors nevertheless appeal to this argument, even if they add the word “if” to the proposal about the development of these diseases in connection with additional vaccinations.

And although myocarditis develops much more often after coronavirus than after vaccination, little is said about it in this context: many are not at all aware that meeting with the virus is fraught with this complication. This can be understood: compared to other consequences of COVID-19, myocarditis looks quite harmless, but as soon as vaccine studies revealed a slight excess in the frequency of myocarditis in vaccinated people, people who still did not know anything about this complication immediately began to fear vaccinations.

The rest of the arguments in the article are not much better. For example, talking about the possible extinction of vaccine immunity, the authors cite data from Israeli studies showing that those who received the vaccine earlier become infected with the virus more often. But in order to interpret them unambiguously, you need to look at the breakdown by age: before the others, either very old and sick people or doctors received both doses of the vaccine in Israel. For the former, the likelihood of breakthroughs in vaccine protection is increased due to poorly working immunity, while the latter are constantly in contact with the virus.

Another unconfirmed thesis is that new dangerous strains will most likely arise on the basis of those that are widespread today, which means that it is necessary not to inject old boosters, but to develop new vaccine variants corresponding to these strains. Of course, this is a likely scenario, but not at all guaranteed. The idea of ​​developing new, expensive vaccines that may be effective against hypothetical new strains seems rather dubious. That is, it is necessary to develop such vaccines, and they have already been developed and even tested on a small number of volunteers, but it is premature to talk about a mass replacement of drugs, to put it mildly. Especially considering that many of the existing vaccines provide good protection against the delta strain.

One can understand why the article in The Lancet caused such a resonance. It’s harder to understand how the magazine’s editors missed it. The result is an excellent case study showing how good intentions can pave the path for antivaccinators and make even those who have already been vaccinated be afraid of vaccines.