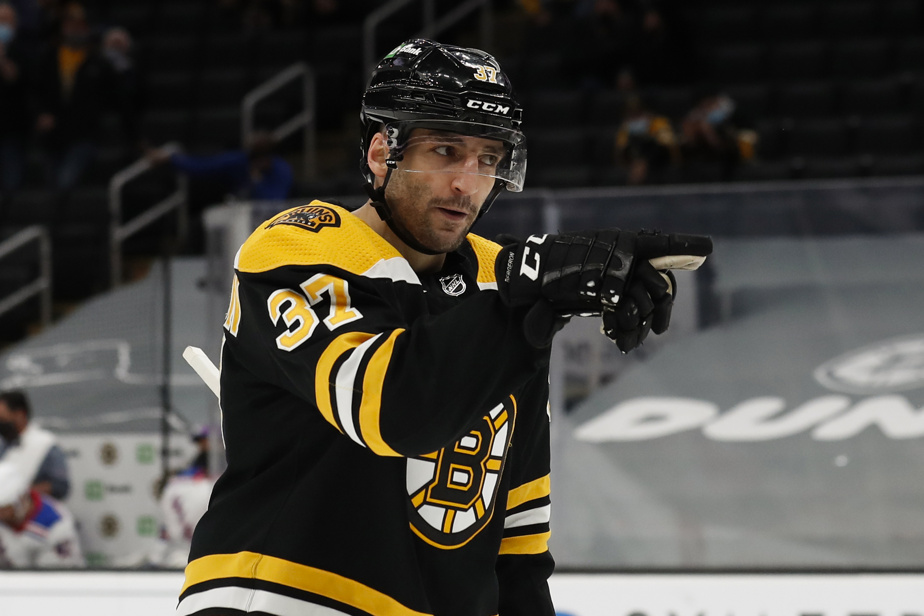 It wasn’t a question of where: it would be in Boston or nowhere else. Nor to know if: his decision has been made for a month already. Even less to know at what price: already, in the past, he had accepted less money to accommodate the management of the club.

It was enough to find the right moment. This one has come: Patrice Bergeron has signed a new one-year contract and will begin his 19e season in the NHL. In a Bruins uniform, of course.

The Quebecer has accepted a one-year agreement which will bring him 2.5 million. He’ll pocket $2.5 million more if he plays 10 games in 2022-23 — a formality, on paper, but one that gives the Bruins a serious boost, as they have virtually no cap space left. Teams can in fact defer the payment of performance bonuses to the following year if they exceed the ceiling.

In a virtual press briefing on Monday, the 37-year-old striker explained that he knew from the beginning of July that he would not retire. Dejected after the defeat of his family in the first round of the playoffs last spring, he had not made his intentions clear to anyone, not even to his teammates. He had to allow himself time to rest and to discuss the future with his wife and their children.

In the meantime, two closely related observations have emerged. On the one hand, he was “not ready” to “take the next step”, that of hanging up his skates. On the other hand, he felt that he still had “the sacred fire”.

Barely a few weeks were enough for “the desire and the passion” to return and for the desire to reconnect with training to take hold of him. His rehabilitation following shoulder surgery is going well. He expects to arrive at training camp in good shape.

Will this season be his last? His reflection is not there, he assures. “Whatever awaits me in the future, we will address it at the right time. I focus on this year. I’m really looking forward to camp! »

With this announcement, the Bruins are securing the services of one of the best centers in the NHL, and certainly the best at his position in defensive coverage. At the end of the 2021-2022 season, Bergeron received the Selke trophy for the fifth time in his career, a record.

Next season, he will likely become one of the top three scorers and scorers in franchise history. He won the Stanley Cup in 2011 and won two Olympic gold medals. A seat awaits him in the Hall of Fame.

At 5 million, Patrice Bergeron undoubtedly represents a windfall for his team. According to the benchmark site CapFriendly, 50 center players will have a total salary higher than his in 2022-2023.

For him, however, it was not a question of money – although 5 million dollars is not a trifle. It is not the first time, moreover, that he accepts an offer lower than what he could have pocketed on the free agent market. For comparison, in 2013, Bergeron signed a contract extension with an average value of 6.875 million. A year later, Jonathan Toews won 10.5 million.

However, for the native of L’Ancienne-Lorette, “hockey comes down to the success of the team”.

“What we want, ultimately, is to win. This is what makes the difference between a great career and a great career. It’s also about the friendships we make, the memories that last a lifetime…”

“We are making more money than anything we could have dreamed of,” he recalled. If I can leave some on the table to keep the team competitive, it can make a big difference. This is the way I want to play: to win, to be successful. »

This philosophy commits only him, but Bergeron hopes that the players who will follow him, in Boston, will adhere to this way of thinking. He is obviously not the only one to see things this way. His teammate and line partner, Brad Marchand, had just signed an 85-point tally when he agreed to a long-term contract worth $6.125 million a year. He is, since the entry into force of this agreement in 2017-2018, the fifth scorer in the NHL.

If Bergeron took so long to confirm his return, it’s because he wanted to leave the field open to the Bruins to settle a series of files during the offseason.

He revealed his intentions to the management of the team as well as to his agent, Philippe Lecavalier. He left the rest in their hands.

The Bears have hired a new head coach, Jim Montgomery. They traded to get Pavel Zacha from the New Jersey Devils. They completed the repechage. Bergeron’s turn then came. By his own admission, he never had any “concerns”.

“We knew the Bruins’ salary situation, but we wanted it to work,” he said.

The respect he felt throughout the process warmed his heart. The one demonstrated by his agent, first. “Phil really listened to me, insists Bergeron. We sometimes hear stories of agents who especially want to speed up the pace with the teams. What we also want is someone who really listens to us, who knows what we want, where we are in our career. Phil understood well where I was. »

He also praised the respect shown by his teammates, who never tried to rush his decision. And he also appreciated that his ex-agent Kent Hughes, who became general manager of the Canadian, did not try to attract him to Montreal.

“He’s better than that,” smiled Bergeron. We’ve known each other for 20 years, he knows Boston is the only place I want to play. He knew he had to stay back, that I had to make my own decision with my family. »

To his knowledge, moreover, no other team has tried to hire him. “You have to believe that it was clear! »

For Patrice Bergeron, in any case, it was.

The Bruins settle their cases

Once Bergeron’s return was announced, the Bruins wrapped up their final records of the summer season. The hiring of David Krejci was revealed in the hours that followed. The center player will pocket a base salary of 1 million with performance bonuses of 2 million. Without a contract at the end of the 2020-2021 season, he returned home to the Czech Republic and played the last campaign with Olomous HC. Unless this season in Europe has knocked him out of the game, Krejci can still be an effective offensive contributor, having tallied 44 points in 51 games his last season in Boston. Also on Monday, the Bruins signed Pavel Zacha. The 25-year-old striker will pocket 3.5 million next season. With the New Jersey Devils, he had 36 points in 70 games last season. He was traded to the Bruins last month for Erik Haula.

US pushes ‘Taiwan = ally’ bill… Is the US-China conflict a new spark?