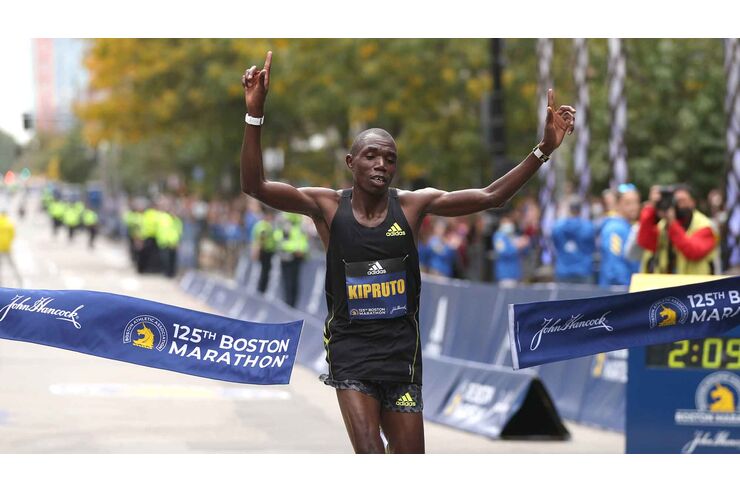 There was a Kenyan double triumph at the 125th Boston Marathon, which took place on October 11, 2021. While Benson Kipruto won the classic in 2:09:51 hours, his compatriot Diana Chemtai Kipyokei crossed the finish line in 2:24:45. On the hilly point-to-point route, which does not meet the record, there were no top times in relatively warm weather with temperatures of almost 20 degrees Celsius. There were interesting races for victory and the associated high bonuses of 150,000 US dollars each. In the Boston suburb of Hopkinton exactly 15,736 runners started on the traditional Monday date. Of these, 15,385 made it to the destination in central Boston. Due to the corona pandemic, the field of runners in Boston was also significantly smaller than in previous races.

CJ Albertson initially ran away from the field

The men’s race began in the Boston suburb with an unexpected advance: the American CJ Albertson ran away from the start. Starting the race with a personal best of 2:11:18 hours, he was not one of the candidates for victory. After just 5 kilometers, the outsider had a lead of almost a minute over the large group of around 30 with the favorites. And on the day of his 28th birthday, Albertson first extended his lead without running an extremely fast pace. When he passed the half marathon mark after 64:08 minutes, the chasing group was 2:13 minutes behind.

But from now on the lead began to melt. At the 30 km mark it was only 54 seconds, and a few kilometers later, on the infamous “Heartbreak Hill”, Albertson’s “excursion” was over. The top group overtook the American, who finally had to be content with tenth place in 2:11:44. About five kilometers from the finish, Benson Kipruto was able to break away from the group and still ran a clear lead. With 2:09:51 the 30-year-old, who has a best time of 2:05:13 hours and won the marathon in Prague this spring, was the only one to achieve a result of less than 2:10 hours. “It was a nice feeling today after I was tenth here a few years ago. Now I’m happy about my victory, ”said Benson Kipruto, who won ahead of the Ethiopians Lemi Berhanu (2:10:37) and Jemal Yimer (2:10:38). For Kipruto, the victory in Boston was the greatest success of his career so far.

The top group of 15 women reached the half marathon point at a slow pace after 74:11 minutes. By kilometer 30, this group had reduced to seven runners. Soon after, Diana Kipyokei started the preliminary initiative. For a short time, the Ethiopian Netsanet Gudeta kept up, but the Kenyan pulled away in the area of ​​35 km. At the 40 km mark, the 27-year-old Kipyokei had a lead of 27 seconds over Edna Kiplagat, who had meanwhile moved up to second place. While Kipyokei won with 2:24:45 hours, the 41-year-old Kiplagat showed that she can still run at the top even at an advanced age. The two-time marathon world champion (2011 and 2013) finished second with 2:25:09, just like two years ago in Boston. In 2017, the Kenyan won the Boston Marathon.

For Diana Kipyokei, the Boston triumph was the greatest success of her career. A year ago, however, she had already won the Istanbul Marathon. In Turkey, she set her current best time of 2:22:06 hours. In her debut over the 42.195 km, she ran 2:22:07 in third in Ljubljana in 2019.

This article may contain links to providers from whom RUNNER’S WORLD receives a commission. These links are marked with the following icon: