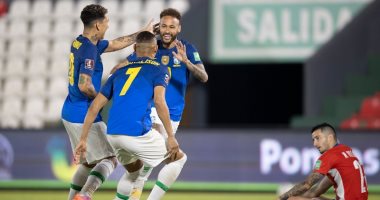 Brazil succeeded in ending the first half of its match against its host Paraguay, with a clean goal, in the match between the two teams currently at the “Defensores del Chaco” stadium, in the eighth round of the South American qualifiers for the 2022 World Cup in Qatar.

Neymar, the star of Paris Saint-Germain, scored the goal of the Brazilian national team in the first half, after receiving a cross from Gabriel Jesus to hit the right of the Paraguayan goalkeeper.

The Seleção team leads the South American qualifiers for the 2022 World Cup, with 15 points, collected from winning the five matches it played in the qualifiers, while Paraguay is fourth with 7 points.

The samba team won its last match against its guest, Ecuador, with a clean double, while Paraguay drew 0-0 with its host, Uruguay.

The Brazilian national team played the match with a formation consisting of: