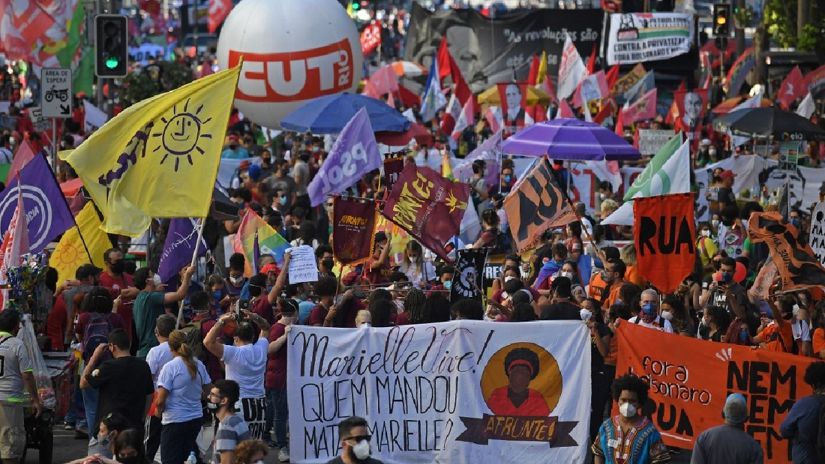 Thousands of people took to the streets in Brazil this Saturday to demand the removal of the president Jair Bolsonaro for his management in the face of the coronavirus pandemic, the fourth protest, in less than two months, in which the country rises massively against the denialist leader.

In more than 400 cities in the country, the protesters also asked to accelerate the vaccination process and increase the amount of aid so that the poorest can face the crisis that came with the virus, which already leaves more than 14.8 million unemployed .

Convened by the trade union centrals, leftist parties and social movements, the protests were held peacefully, throughout the day.

The most massive demonstrations occurred in Sao Paulo, the most populated city in the country and the one hardest hit by the pandemic, Rio de Janeiro, Recife, Belo Horizonte and also in Brasilia, where the protests were concentrated in front of the Congress headquarters, to reinforce the pressure for an impeachment against Bolsonaro.

In the Brazilian capital, political leaders and protesters agreed that the pressure of the Brazilian people against Jair Bolsonaro is increasing.

“The indignation of the people and the protests in the streets are going to reach Congress. The parties and unions are pressing for the impeachment process to be opened,” Gleissi Hoffman, president of the Workers’ Party (PT), told Efe. , the main opposition formation and to which former president Luiz Inácio Lula da Silva belongs.

In the same vein, Víctor Ferreira, a 25-year-old businessman who came out to protest against the president disguised as Indiana Jones, said that Bolsonaro will be dismissed by his own followers.

“Just like Captain America he fights fascism and that reflects everything I think about. It’s good against evil … Indiana Jones fights fascism, fights evil and I think it’s a good analogy,” he said.

ALLEGED ACTS OF CORRUPTION IN PURCHASE OF VACCINES

The management of the Government of Jair Bolsonaro is being harshly questioned by suspicions of corruption in the purchase of vaccines, that have been uncovered by the investigations carried out by a Senate commission and that have even put the president himself under the eye of the Prosecutor’s Office.

The denialism of the far-right leader to face the pandemic and the alleged corruption at the expense of the covid have raised in Brazil the requests for his dismissal, promoted by the opposition.

Huge banners with the phrases “Out with Bolsonaro!” “Vaccine for everyone now!” and “Bolsonaro genocida” were the common denominator of the protests, where despite the efforts of the organizers there were agglutinations, although the vast majority of the participants wore masks.

Brazil is one of the countries hardest hit by the coronavirus pandemic, with more than 548,000 deaths and 19.6 million infections.

The number of deaths and positives has dropped substantially in the last month, thanks to the vaccination campaign that is being carried out in the South American giant. Since the immunization process began in Brazil, six months ago, 45% of the population has received at least one dose of the vaccine. However, only 17% of its more than 212 million inhabitants have the complete vaccination cycle.

The COVID-19 has put everyone on alert. Subscribe to our newsletter All about the coronavirus, where you will find the most relevant daily data in the country and the world on the progress of the virus and the fight against its spread.

‘Living Space’: How Long Does Immunity Last After COVID-19 Infection?