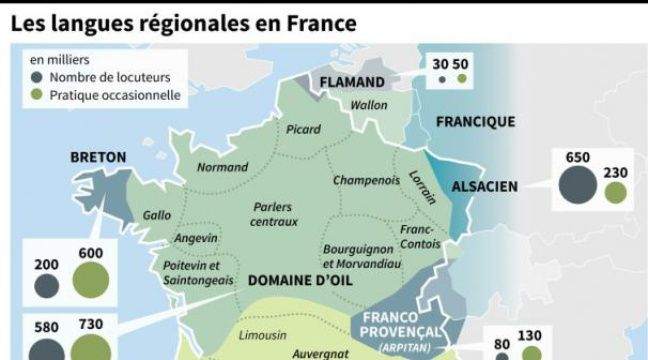 Thousands of people in Guingamp, a few hundred in Colmar and Bastia. Defenders of regional languages ​​demonstrated on Saturday to demand “immersive education”, recently censored by the Constitutional Council. “People are there because they are afraid that association schools will be closed. The decision of the Constitutional Council could deprive them of all their funding “and” calls into question an educational method used for more than 50 years “, declared the deputy of Morbihan Paul Molac (Liberties and Territories), present among the 6,000 Breton demonstrators (according to the prefecture, 10,000 according to the organizers).

Paul Molac is the author of the law on regional languages, passed on April 8 in the Assembly and partially rebutted on May 21 by the Constitutional Council, which censored the immersive method at school as well as the use of signs diacritics like the tilde (~) in civil status documents. “We are at an impasse, to get out of it we have to modify the Constitution,” said Yann Uguen, president of the associative schools of immersive teaching in Breton Diwan.

During the Alsatian rally, bringing together about 200 people at the end of the morning, the president of the Grand Est region, Jean Rottner, LR candidate for re-election, received a large quantity of flour on his head. Cries of “traitor” and “felon” were heard, against this former defender of Alsace who became a figurehead of a large region still often poorly accepted.

The Alsatian rally attracted many candidates in the next regional and departmental elections, while the red and white flag of Alsace was omnipresent. “The only way to ensure that my children can become true speakers of Alsatian and later pass on to their children a language that has been in their family for centuries is immersion education,” explained Cécile Walschaerts, Belgian married to an Alsatian and mother of two little girls aged 7 and 5, who did their kindergarten years in Alsatian / German immersion.

To be floured on this occasion by an autonomist is a form of recognition.
I am very sensitive to this tribute to Alsatian pastry.
I keep some for my Kougelhopf and my Sunday pretzels. Hopla! pic.twitter.com/NrnngitTcE

“So that our languages ​​live”

In Bastia, Corsican polyphonic songs closed at the end of the morning the demonstration of just under 200 people, including the leader of the independence movement “Corsica Libera” and President of the Assembly of Corsica, Jean-Guy Talamoni, in front of the premises of the academic inspection for the defense of the Corsican language. Two banners were unfurled with the message “For our tongues to live.”

“It’s a fundamental mobilization.” The Constitutional Council denied a democratic fact. What is happening is very serious. It challenges all devices for teaching the Corsican language, ”Ghjiseppu Turchini, a Corsican language teacher, told the microphone. Also in Lille, about forty people came to demand from the rectory the primary education of the Picard from the beginning of 2021 and the recruitment of Flemish teachers.