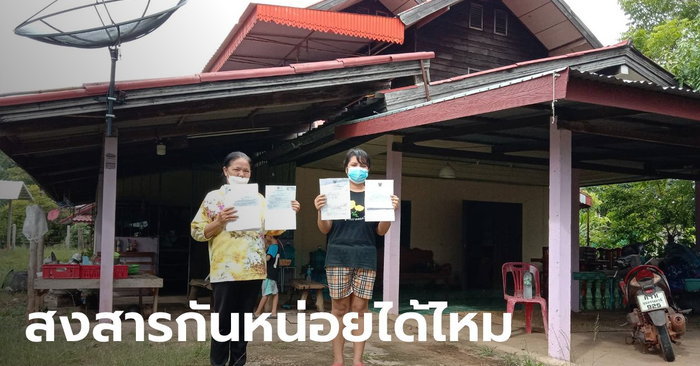 municipal school teacher call for the Damrongtham Center will be confiscated the house and land After guaranteeing to buy a car for 1.2 million for a friend who has been close for 10 years, begging for some remorse and pity. due to indebtedness Having to take care of 2 grandchildren, my daughter is sick.depression

medianewsReported today (September 21) Mrs. Sunida Kantaphak, 59 years old, teacher at Kham Pom Subdistrict Municipality Kindergarten in Khemmarat District, province.Ubon Ratchathani came to ask for help at the Damrongtham Center in Ubon Ratchathani Province After going to guarantee a pickup truck worth more than 1.2 million baht for a colleague. with mutual trust and was sued by the finance company House and land seized for sale at auction on October 7, 2021

Ms Sunida revealed that she had suffered a lot due to the Ubon Ratchathani Provincial Legal Execution Office. will seize the land and houses that live with the family at present because of the friend who bought the car Refusing to send car installments Still owed money with the finance company 1,211,140 baht and not responsible for anything. making himself the third defendant as a guarantor and was sued for confiscation instead

Ms Sunida said that the buyer was Mrs. Patita (last name reserved), 41 years old, working at the Kham Pom Subdistrict Municipality Office. Employee position according to mission We have known each other for about 10 years, and we will always depend on each other.

By Mrs. Pathitta, she is often sick and has to travel by car to take her child to the doctor. want to buy a car to take the child to the doctor and asked him to help guarantee the car with Mrs. Patita’s husband, Colonel Sergeant Samneang, 41 years old, is a naval officer under the Naval Fleet. Royal Thai Navy, Bang Na, Bangkok is also a guarantor and was sued by the company as the second defendant.

Recently, he received a warrant from the Ubon Ratchathani Provincial Legal Execution Office. in the warrant stating that the executing officer has seized the land with the construction of the house where they live with their current family The land will be sold at auction and ready to be built on October 7, 2021.

He was very shocked because the house he had built with heavy water. Husband is deceased. There is also a debt burden. Having to take care of 2 grandchildren, my daughter is sick.depression Today, they only earn from their salary.

I would like to say to Mrs. Patitta and Colonel Sergeant Samneang, two husbands and wives that they supported the car for. If you still have feelings and pity for yourself and your family to be responsible for the outstanding payment because now I’m very sad even if it’s not your own burden Now there’s really no way, especially duringCOVIDIt’s hard to eat like this.

side Damrongtham Center, Ubon Ratchathani Province revealed that preliminarily, the provincial Dharma Center will send the matter to the supervisors under the jurisdiction of the two husbands and wives. To report the behavior that happened to be informed. The nature of the car leasing is likely to have fraudulent intent. because paying only 5-6 installments

The car did not know where to go, did not bring it back to the finance company. The finance company refused to go along and investigated the property and found that the guarantor had securities as a house and land. So he sent the court to enforce the case with Mrs. Sunida Kantaphak, the guarantor.