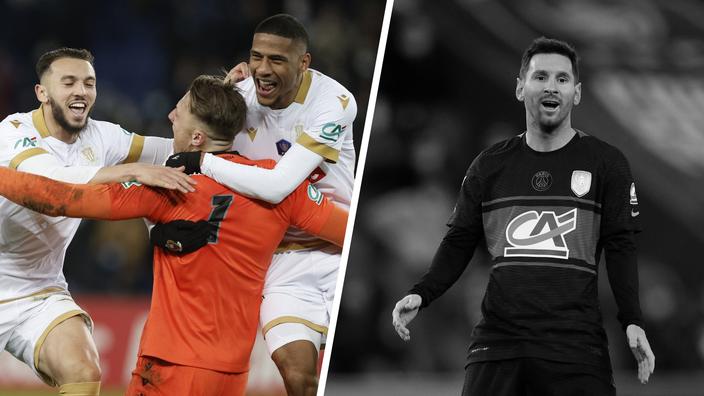 Bulka’s successful penalty shootout, Kluivert’s liveliness, the questions around the Messi case: find the Tops and Flops after this match between PSG and Nice (0-0, 5-6 pens).

Bulka, Nice hero at the Park
PSG was again betrayed by a former member of the club. We remember Kingsley Coman, executioner in the Champions League final. There will therefore be Marcin Bulka, who brought down his former club (2019-2020) by managing to deflect two attempts during the fateful penalty shootout (Paredes, Xavi Simons). Vigilant on the few hot spots during the meeting, the usual goalkeeper number 2 of Nice knew how to be imperturbable against his former partners. And ended beautifully.

And immediatelyCoupe de France: Nice takes a big hit in Paris and will challenge OM

Kluivert has been a constant poison
Justin Kluivert, son of, was the most dangerous Nice striker. We were expecting Gouiri, Dolberg or Delort but it was the Dutchman who was the most threatening with the ball, his liveliness putting Colin Dagba in difficulty. It was he who got himself the most dangerous situations on the Nice side, with a strike repelled by Donnarumma and another countered by Danilo.

Verratti, the only Parisian at the level
He is one of the darlings of the Park and we can understand that. Marco Verratti was again the only one to illuminate this part with several ball-to-foot initiatives. Elusive, he even tried his luck, a shot too crossed in the first period, another deflected above in the second.

Thuram takes his ease
Kephren Thuram is one of Nice’s revelations of the season and, at the Parc, he was once again successful. Lilian’s son has been gaining stature for a few weeks and has shown it again by not hesitating to project himself thanks to his long legs. An activity that did good and made it possible to launch some counterattacks from Nice. His exit has also hurt his team.

Messi, a real enigma
Lionel Messi started for the first time since December 22 and it showed. Short of pace, the Argentinian appeared to be not very dashing. Making almost no differences in one against one, he seemed clumsy, unable to energize the Parisian attack. Being guilty of several ball losses, he never seemed able to behave as an offensive leader. And Mbappé’s late-game entry barely helped him exist any longer.

15 days from Real, PSG does not reassure
The weeks go by and the observation remains the same: PSG do not convince in the game. If the Parisians had the ball, they never made good use of it, with a lot of side passes and little verticality in the game. Between the absence of risk-taking and movement, the performances of this team call out. A Paris that seems lost and now finds itself eliminated from a Coupe de France which it usually specializes in. Especially since in 15 days, the great Real Madrid arrives for the 8e first leg of the Champions League.

Icardi, still mediocre
6 balls hit, 3 lost: such is the distressing record of Mauro Icardi during the 64 minutes spent on the pitch. If he tried to exist at the dry cleaners, he was never found by his partners. With an almost logical output.