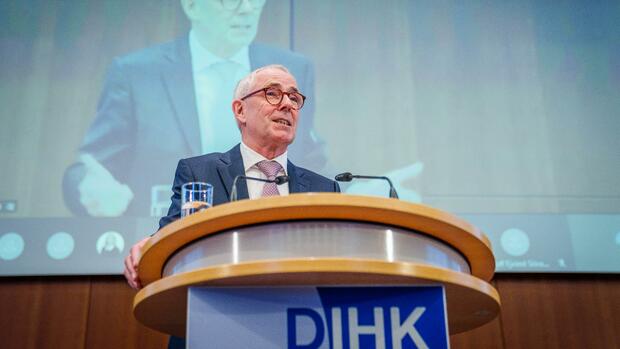 Berlin It could almost appear as if something was going to be decided in a night-and-fog action. After all, the reform of the German Chamber of Commerce and Industry (DIHK) was also controversial within the governing coalition.

But the fact that the law was not on the Bundestag’s agenda until late Friday night has nothing to do with secrecy, but with the time pressure in view of the approaching summer recess for parliament.

While the Chambers of Commerce and Industry (IHK) have so far been able to join the umbrella organization voluntarily, in future they will be obliged to become a member of the DIHK. This should also apply to the transition phase up to the establishment of the Federal Chamber.

The governing coalition is trying to counteract the centrifugal forces in the chamber organization. The Federal Administrative Court had found a chamber critic from the Münsterland right and ordered his IHK North Westphalia to leave the DIHK.

The central association could not pretend that it was speaking on issues such as the energy transition for the entire economy because there were many dissenting opinions, argued the complaining wind power company. As a compulsory member of an IHK, he does not want to be caught up in such statements – and the DIHK statutes do not allow them either.

Alarmed by further lawsuits and because they saw the functionality of the DIHK, which was largely silent after the judgment, in jeopardy, the Union and the SPD decided to change the IHK law. The legal supervision of the DIHK should in future lie with the Federal Ministry of Economics.

The reform was a long struggle. The SPD rejected an expansion of the DIHK’s competencies and criticized the fact that the umbrella organization had often positioned itself against social democratic or trade union positions. In addition, Minister of Economic Affairs Peter Altmaier (CDU) initially tried to adapt the law to the illegal behavior of the DIHK.

Chambers must point out dissenting opinions from members

IHKs and the DIHK are required to determine the overall interests of their members when positioning. In future, however, they will have to point out in their communication to the outside world if there are divergent opinions. Finally, it was clarified in the law that not every individual opinion has to be listed.

In addition, the law stipulates that the chambers and their umbrella association do not have a general political mandate, but can express their views on all topics that are relevant to the commercial economy.

The DIHK can, for example, comment on border closings if this threatens supply chains. The right of expression also expressly includes “goals of sustainable development”, for example environmental or climate issues.

The chambers have to stay out of all questions that employers and unions regulate among themselves. But if the legislature enacts regulations that apply to all companies, such as the home office obligation, they should be able to express their views. The DIHK does not receive any new skills in vocational training.

The future Federal Chamber will be obliged by statute to set up a complaint procedure with a complaints committee in the event that members complain about violations of competencies.

Criticism from the opposition, trade unions and a chamber

Opposition, unions and individual chambers criticize the law: “Unfortunately, the issue of transparency in the chambers was written very small in this amendment,” says Claudia Müller, the spokeswoman for small and medium-sized enterprises for the Green parliamentary group. Even more must be done in terms of supervision in order to exclude the appearance of a conflict of interest.

But after the reform the central problem remains that in the IHKs – unlike in the chambers of crafts – only company interests are represented, criticizes Stefan Körzell, board member of the German Trade Union Confederation (DGB).

“Even if the rights of minorities within the entrepreneurship are strengthened in the chambers, an overall interest of the commercial economy would of course also have to reflect the interests of the employees.” Here an opportunity has been wasted, says Körzell.

Even in the chamber organization, not everyone is happy with the DIHK’s strengthened role: “We have changed so much as the Chamber of Commerce and Industry that the DIHK no longer suits us,” says Eric Weik, General Manager of the Central Ruhr Chamber of Commerce.

As the only chamber so far, it has announced that it will terminate its membership in the DIHK for the end of 2021 if nothing changes in the work of the association. “We orient our actions exclusively to what is useful to our member companies,” says Weik.

More: How Peter Adrian wants to fight the centrifugal forces in the trade association