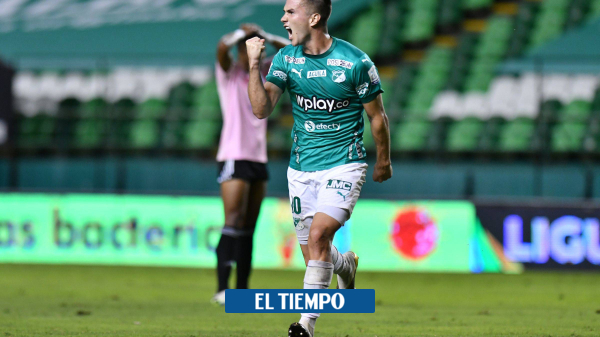 Millionaires he was left empty-handed. Deportivo Cali beat him this Tuesday on penalties in the repechage match and qualified for the South American Cup 2021, after a 1-1 draw in the 90 minutes to a single game and with a great game from the debutant goalkeeper Humberto Acevedo, from the sugar team.

The blue team, full of casualties, played determined from the beginning, with ambition, with lines up, putting pressure on Cali and surprising them with their offensive voracity.

(You may be interested in: Dimayor defines date for the draw of the League 2021)

Already at 7 minutes he had the goal, with a great header from Emerson Rodríguez, who appeared in the area completely alone, and goalkeeper Humberto Acevedo had a great intervention, the first, because he would have a lot of work.

Cali did not react and Millos took advantage of the fact that he was more comfortable on the court, with quick transitions to attack.

Roman tried with a good shot and again Acevedo flew to prevent his goal from receiving the goal.

The sugar team, for its part, only got scared on one occasion in the first half, and it was in a still ball, with a great free kick from Angulo that goalkeeper Moreno spectacularly avoided.

Millos was much better, owner of the game, he only needed the goal and found it at minute 36, with an impeccable free kick from Juan Camilo Salazar, who passed the ball over the barrier and beat goalkeeper Acevedo, who could barely caress the ball.

See Also:  FCZ quarantine over - now the master is waiting

In the second half, Cali reacted, he went over his rival, but he again sinned from the same evil of the entire league, lack of definition.

Several times the tie was lost, some due to poor definition or due to the opportunism of goalkeeper Moreno, who in 12 minutes had another fly to save his goal.

Until the tie came. Palavecino found the formula with a shot from outside the area, at minute 63. Goalkeeper Moreno could not react and it was 1-1.

Millonarios, which was the team that won the eliminated league, could take the victory, but a goal from Llinas was badly disallowed due to a supposed misplaced situation. And then Salazar missed it under the arch, with the arch alone.

The end of the game was back and forth, with risk in both arches. But the tie was no longer broken and so they went to penalties in which Cali was more effective, with Acevedo’s save at Abadía’s shot. Roman also failed. .