The Pathlite: ON comes with two batteries, which ensures a sensational range. But the sender’s bike also cuts a fine figure on short everyday trips.

With the Pathlite: ON, dispatcher Canyon offers a fully equipped trekking or touring bike. The word “cheap” has a strange connotation at a price of almost 5,000 euros, but the top model 9.0 remains true to the consignor’s principle of delivering a lot of equipment for the price. At 5000 euros this means that nothing is left to be desired.

The most striking feature is the equipment with two batteries – one integrated, one hidden. This leads to a total capacity of 1000 Wh – that is almost 400 Wh more than Bosch’s largest single battery with 625 Wh. The large power storage means that you can also cover longer trips with the motor. Hardly anything can be said in general about the range. Someone who likes to drive at top speed and with little effort can barely get half as far as someone who only drives 20 km / h and works hard at the same time. Roughly, you can say that the battery will bring comfortable riders over 100 kilometers, and more ambitious cyclists over 150 kilometers. Those who essentially switch between the Tour and Eco support levels can even cover over 200 kilometers. The capacity can also be upgraded. The open battery can be easily changed. If you really want to, you can put a third battery in the luggage bag. So the range is certainly sufficient. Especially since inexperienced and untrained people tire over time, even with a motor on one bike. A non-cyclist should therefore not believe that he can sit in the saddle for twelve hours every day just because the engine does the work. 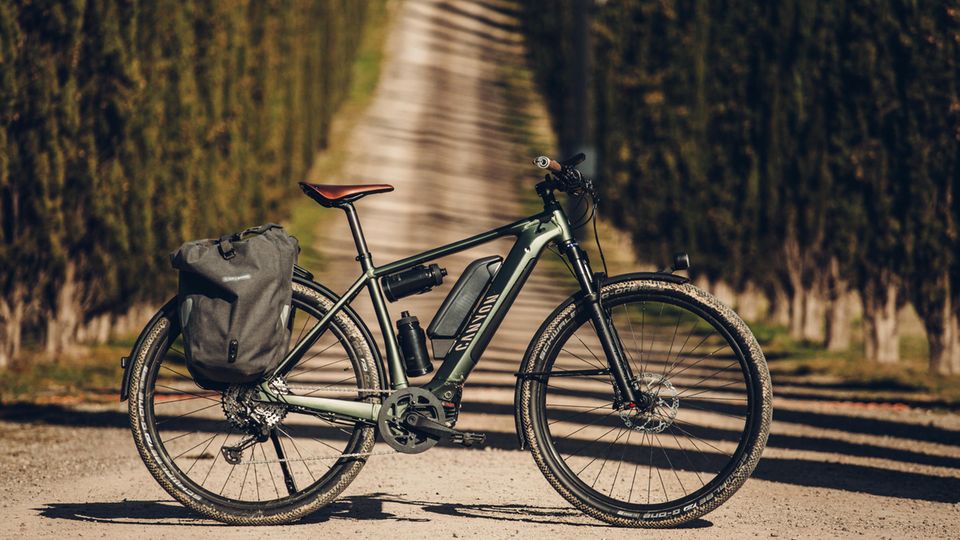 But not for the tour around the world

The concept of the Pathlite: ON is a touring and touring bike – but not an expedition bike. Wheels that are built to cross Africa place particular emphasis on robust, wear-free components and wheel sizes that are represented around the world. Above all, however, they usually do without the front suspension of the Pathlite: ON, so that bags can be better mounted on the front wheel. That doesn’t work with Pathlite: ON, or at least not well. Here you are referred to pockets on the back. The porter is allowed to carry 25 kilograms, which is more than you can take with you on a flight. Anyone who wants to pack even more is referred to a trailer.

The current Bosch Performance Line CX was installed in the drive; measured in terms of power, size and sensors, it currently belongs to the top group of e-wheel motors. Everyone has to decide for himself whether he is the “best”. Depending on your feelings and preferences, the top engines differ a little. Despite the impressive 75 Newton meters of torque, the CX offers the feeling of being on a bike and thus differs from even more powerful drives that do not give a real bike feeling. As always with the mountain bike motors from Bosch, there are only three gear stages. Level four – otherwise sport – is replaced by a special mountain gear that enables very sensitive control.

In line with the purpose of travel, the 9: 0 top model has the large Nyond display, on which you can run a navigation system in addition to what feels like a thousand data. The entire further equipment of the bike is very valuable and well thought out. It starts with the elegant handles and the Brooks saddle and continues with the Shimano XT equipment. You get a lot for your money here. However, savings were made on the cassette. It comes from the cheaper SLX group. Purists can upgrade the wear part in good time. You can argue whether it always has to be XT or a four-piston brake, it always feels better. It’s just fun to touch the bike.

At the rear, a derailleur works with the comparatively new 1×12 standard. The derailleur also leverages the chain on very large rings. This is not a special feature of Canyon, but it makes a huge difference to the 1×10 systems for e-bikes due to the lack of a second or third front rim. The Pathlite: ON is not a mountain bike, but the motor and gears can handle any incline. A special feature, because many touring bikes are delivered in such a way that they run out of breath above a ten percent gradient.

Canyon itself says that the bike is primarily intended for paved roads. The 57 millimeter wide Schwalbe G-One tires are nubbed, so they have no terrain profile, but because of their width they can also be used on unpaved surfaces. Anyone who travels a lot on mud and mud should switch to tires with more off-road grip. The lighting – Supernova M99 mini Pro – with its high beam is also suitable for tours off the beaten track.

The posture on a bike always depends on your own body shape and the settings on the bike. The Pathlite: ON 9.0 is an amazingly relaxed touring bike. The posture leans slightly forward, but not too much. So you still have a good view with a relaxed head position. The straight handlebars offer good control of the bike. You can argue about the stem. The handlebar and stem are made from one piece, it looks nice and clean, but does not allow adjustment from series production onwards.

A bike with two batteries and 27.5 kilograms is of course not lightweight. When transporting with the bike rack, the batteries should be removed beforehand to relieve the load on the rack. The bike is too heavy to carry it up to the fourth floor every day.

The Pathlite: ON is easy to get used to. The bike convinces with a calm character, which means that no mistakes were made in the construction. In fact, it’s more maneuverable than its size would suggest. When loaded, the bike remains very stiff and good-natured.

It can be used as an everyday bike for short distances as well as for long tours. Suspension, tires and direct steering cope with fields, gravel roads and easy terrain. For bike lovers, there is also the feeling of the noble components, the difference, for example in the feel to the next cheaper Shimano group, is striking. The non-adjustable handlebars may be a disadvantage, but it was a perfect fit for us. If it were our own bike, we would think about a more powerful charger to fill the 1000 Wh faster. However, the standard device can be better on tours, because you shouldn’t hang several turbo-chargers in the group on an extension cable.

There are several bikes from the Pathlite series. In addition to the 9.0, only the 8.0 is equipped with two batteries. Here you have to do without the large Nyon display, among other things, but the model costs a whopping 1000 euros less. If you don’t need the extreme range, you should look at the models with a battery. Because of the weight alone, the range of the 9-0 should be used at least occasionally.