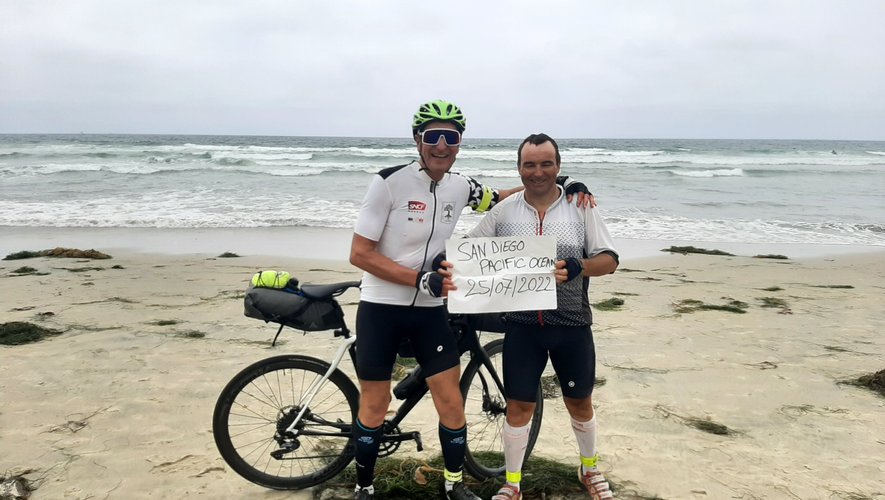 Stéphane Cazottes, originally from Capdenac, set himself a challenge for his 50th birthday: to cross the United States of America by bike with his colleague and friend Eric Delubac. We had met them during the preparation of their adventure (see La Dépêche du Midi of May 13, 2022) and followed them during their adventure. Here they are after completing the 5,314 km in 235 hours of cycling.

Here are their first impressions: “Southern California was no picnic. Until the last stage we climbed passes in the heat wave, rode from 4 hours to spend as little time as possible under 47°C at the shadow. And there was no shadow. Sometimes we crossed deserts of sand dunes. It was like Saudi Arabia! But that’s it, this Monday, July 25, as originally planned, around 1:30 p.m., after 5,314 km in 235 hours of cycling and an elevation gain of 27,335 m, we reached the beach of La Jolla, a suburb of San Diego, a beach in the Californian South Pacific about twenty kilometers north of Mexico Boston is far! 38 stages of 138.5 km on average, 6 days of rest. We missed the Tour de France on TV but we crossed America diagonally, from East to West, met lots of very friendly Americans, were surprised by the bike paths in the big cities, by the number of active churches all along the road, by the signs pro or against Trump, by the number of American flags on the doorsteps, by the beauty of New Mexico and Arizona… Unforgettable memories and images, a journey to tell again and again to our grandchildren.”

“You have to live your dreams. All you have to do is decide to leave… and the hard part is done” (Tony Wheeler).

Force TSMC to set up a factory, where is the noisy US “Chip Act” now? | TechNews