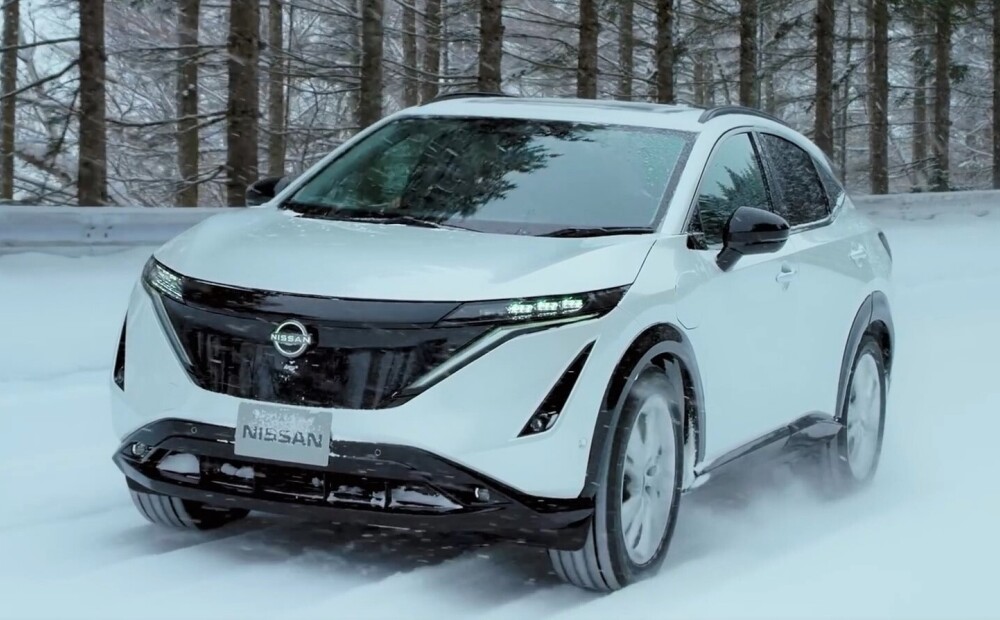 Length 4.6 meters, wheelbase almost 2.8. This means that the Aryia is ten centimeters longer than the new Nissan Qashqai, but the cabin length is already approaching the dimensions of a seven-seater. However, there are only five seats, as Aryia is a crossover. While it may not seem like it at first glance, it is indeed an SUV. Proof of this – this will also be available with all-wheel drive. There will be four different versions in total. Two types of batteries, 63 or 87 kWh. Mileage according to WLTP from 360 to 500 km. Nissan Aryia already uses a lithium-ion running battery with a thermal management system and a liquid cooling system that the Leaf does not have. By replacing permanent magnet electric motors with more modern ones, Nissan has achieved 160 to 290 kilowatts of power, depending on the version. This means that the top version of the Performance is equivalent to 400 horsepower with the corresponding acceleration – 5 seconds to 100 km / h!

The Nissan Aryia will be built on a brand new Nissan electric car platform that has nothing in common with the Nissan Leaf. It is best seen at the back. The doorway is bigger, the door is wider, it opens further. And, as we can see, there is significantly more space in the back. A mandatory task of a static presentation is to sneak into the trunk. There is nothing special about it, but Nissan made sure that the double floor in the upper position coincided with the threshold. The size of the wheels is not modest, and as you can see, Nissan has not been fascinated by the idea of ​​Europeans abandoning the rear disc brakes.

See Also:  "Structural changes are missing": a lawyer celebrates ruling in the George Floyd case but launches an alert

Another important difference from the Nissan Leaf is that the charging socket is not in the front but in the right wing. And more importantly, the CCS2 standard, which is widespread in Europe, is revealed under the cover. Arigato, chademo! In Japan, Aria will have the old staple, and on both sides, not just on the right.

On the fast charging network, Aryia will be able to use up to 130 kW of charger power, which promises to charge up to 375 kilometers in just 30 minutes. No less important is the AC charging performance. The European Arias will have a 7.4 kWh internal charger for single-phase solutions and 22 kilowatts for three-phase. So Aryia from Wallbox will charge as fast as French Zoe, or even faster. Of course, when we open the conditional bonnet, we do not see the engine. It is at the bottom between the front wheels. The space is mainly occupied by an inverter, 12 volt battery and other accessories.

Ivars Valtass, Head of Corporate Sales at Nissan Nordic Europe in the Baltics, revealed that the projected price range for Ariya will be from 50,000 to 65,000 euros. Active sales of Nissan Ariya in Latvia will start in the summer of 2020. The first deliveries are scheduled for January 2022.

“Everything is allowed now!” Kim Kardashyan is photographed naked after her divorce

VIDEO: A little hockey player comes into a coma after an unsuccessful crash on board