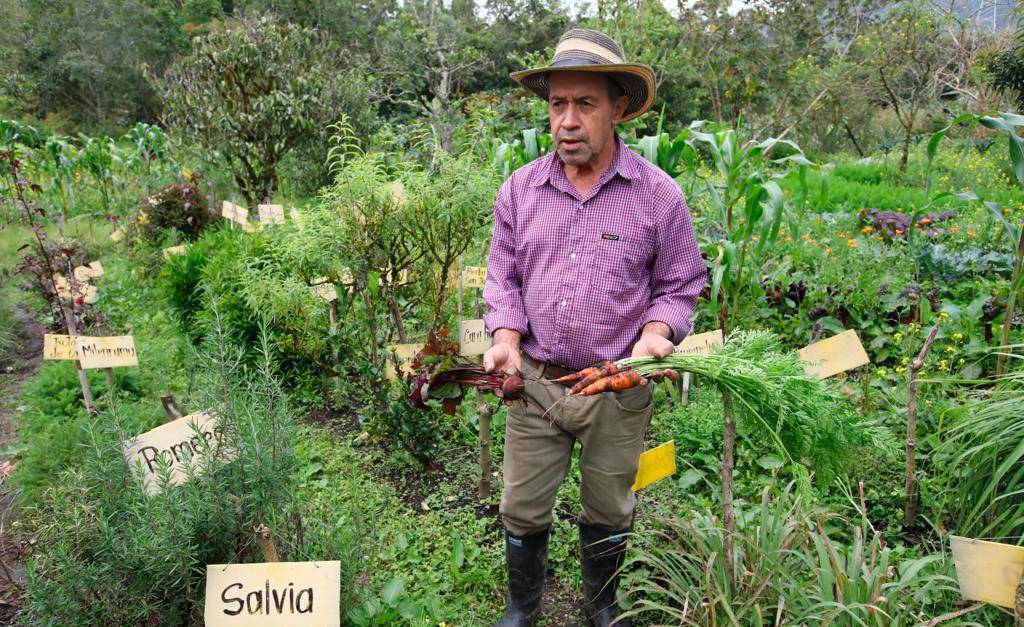 In the hectare of land that Carlos Osorio owns, a beautiful bean grows among dozens of vegetables and tubers and rich called petaco that his great-great-grandfather cultivated 200 years ago, a rebellious bean that germinates even among the undergrowth of the mountain.

Around the 83 medicinal plants that grow in his garden grow purple lupines, a legume that the world is just beginning to discover as a potential superfood and that has the ability to recycle nitrogen. In other words, while the war in Ukraine puts the planet’s food production in check due to the shortage of nitrogenous fertilizers, in Carmen de Viboral, in the Rena-Ser farm, the Lupines provide natural fertilization to help keep this Eden fruitful of circular gardens, live fences and a refuge for native seeds (which were introduced decades ago and successfully adapted) and native seeds (typical of the territory). All this is the work of Carlos, a 68-year-old peasant, symbolic doctor in Agroecology at Berkeley, the best university in the United States.

The paths that led Carlos to be a master of sustainable agriculture recognized in Latin America began when his life seemed to disappear, almost 30 years ago. In 1993, they discovered massive blood poisoning. Thirty years working among bean and potato monocultures with a fumigation pump on his back spraying insecticides and herbicides was the trigger for the poisoning that consumed him in silence. The only two ways out were to occupy themselves with something else or continue with the same and take the final blow. “The problem was that I was barely in second grade and the only thing I knew how to do was fly a hoe and fumigate,” he says.

I was wrong. Carlos accumulated since he was eight years old, when he was already working the land with his father, a knowledge about the field, the soils, seeds and plants that he fed during his life and that at the crossroads imposed by his illness came to the fore.

In 1994, guided by a neighbor, a botanist, he began his second life as a farmer, but without a single drop of agrochemical. All organic. This is how Rena-Ser began to cultivate seeds on his farm that served to feed him and his ancestors and that have been forgotten by the devastating agribusiness and its chemical arsenal to maximize productivity.

And so hundreds of native and creole seeds made their way onto his farm: petaco and rochela beans, resistant and nutritious like few legumes; the brown potato, the cucumber and the morasurco, tubers with very high nutritional values; or the marigold bulb, an essential ingredient in dishes for decades, similar to cubes or yams, and whose flower lasts 24 hours and has nothing to envy to the beauty of an orchid.

In the seed fairs, where Carlos began to attend to show and sell his dairy products, sprouts and crops, he began to weave a circle of friends and experts. And he officially became one of the 20 custodians of native and creole seeds of Antioquia, in a network that is articulated with networks in the country, which through 428 custodians seeks to recover agricultural identity and food sovereignty.

In 2009, he received an invitation to travel to Brazil to share his knowledge on agroecological agriculture and defense of native seeds. His was the keynote speech of the event and in 2010 Cuba required him to share his peasant wisdom on the island. In 2012 he was Chile. There he defended the thesis of a student from the University of Antioquia.

It turns out that the student was conducting research at Rena-Ser on resilience to climate change, a term that didn’t mean much to Carlos at the time. One day a deluge fell that devastated monocultures in the municipality and, however, Carlos’s garden recovered a week later. There he understood the meaning of the term.

He then traveled to Argentina, Uruguay, Peru and his last presentation was in Nicaragua, in 2017. Throughout this teaching and learning process, he was accompanied by the Chilean Miguel Altieri, a Berkeley professor and one of the highest international authorities on agroecology, who understood that Carlos contained such important empirical knowledge that it was necessary to transmit it throughout the continent. . It was through him that the renowned university, which ranks first in the United States, recognized this peasant from Eastern Antioquia.

Last week Carlos was in the Comfama library in Aranjuez talking about biodynamic agriculture. He expected to speak before a few people and saw the packed auditorium. Carlos explained to them that biodynamics seeks to align all the elements of nature with the correct choice of times for each of the actions required to cultivate the land. The result, if done right, is more fertile soil and healthier food and plants.

He is moved by this awakening of citizens in the face of food and the way of producing it, but it does not hide that there are realities still far from changing. Marketing circuits continue to be exclusive for these indigenous products. Monocultures and industrially produced food remain king.

An orchard to orchard fight

Retired professor Tito Antonio Machado Cartagena is clear that there is still a long way to go to recover agricultural diversity, but he also knows that each peasant agro-family garden is worth gold. From the Environmental Academic Corporation of the U. de A., Professor Tito has been helping peasant families for years to make the transition from economic and food dependence on monocultures to small polycultures.

The idea, he explains, is to aim for three objectives: clean up the environment by dispensing with chemicals and allow the relationship between soils, plants, microorganisms and animal species regulate production. Improve the food security of families. And safeguard the agricultural diversity of the country and the world.

There is knowledge of 30,000 edible plants in the world, but in the average diet of a Colombian only between eight and nine varieties are present due to the loss of agricultural and culinary knowledge and the traps of agribusiness.

Professor Machado estimates that between 65% and 70% of Creole and native seeds have been lost in the country. But he assures that it is possible to recover them. And they are doing it, although the annihilation of diversity has been brutal.

Agro-industrial policies promoted by multinationals have been relentless in the introduction of genetically improved species and in moves to destroy native species. In the country, to receive certification for agricultural production, peasant producers have been forced to work with seeds patented by large industries.

But with each agroecological garden, small pockets of rebellion are consolidated. Varieties of beans, carrots, cider, potatoes, tomatoes, cassava, peppers, fruits and hundreds of foods that surely a twentysomething has never eaten or seen today are grown in these gardens.

There are currently dozens of projects running, led by the University of A. and other universities, city halls, the Government and international organizations such as the FAO. Medellín, for example, has had a network of orchard farmers for nine years. Just this week Machado began setting up an agroecological project with families who were victims of the conflict in Amalfi.

Today not only do these orchards serve for the food sovereignty of families, but the products grown are beginning to have more of a market, especially among the young population.

Faced with the imminence of devastating famines, science and governments are increasingly wondering how to guarantee food for the people. Carlos has an answer: planting native seeds and consuming them. You have to listen to those who know, while they are still here. n