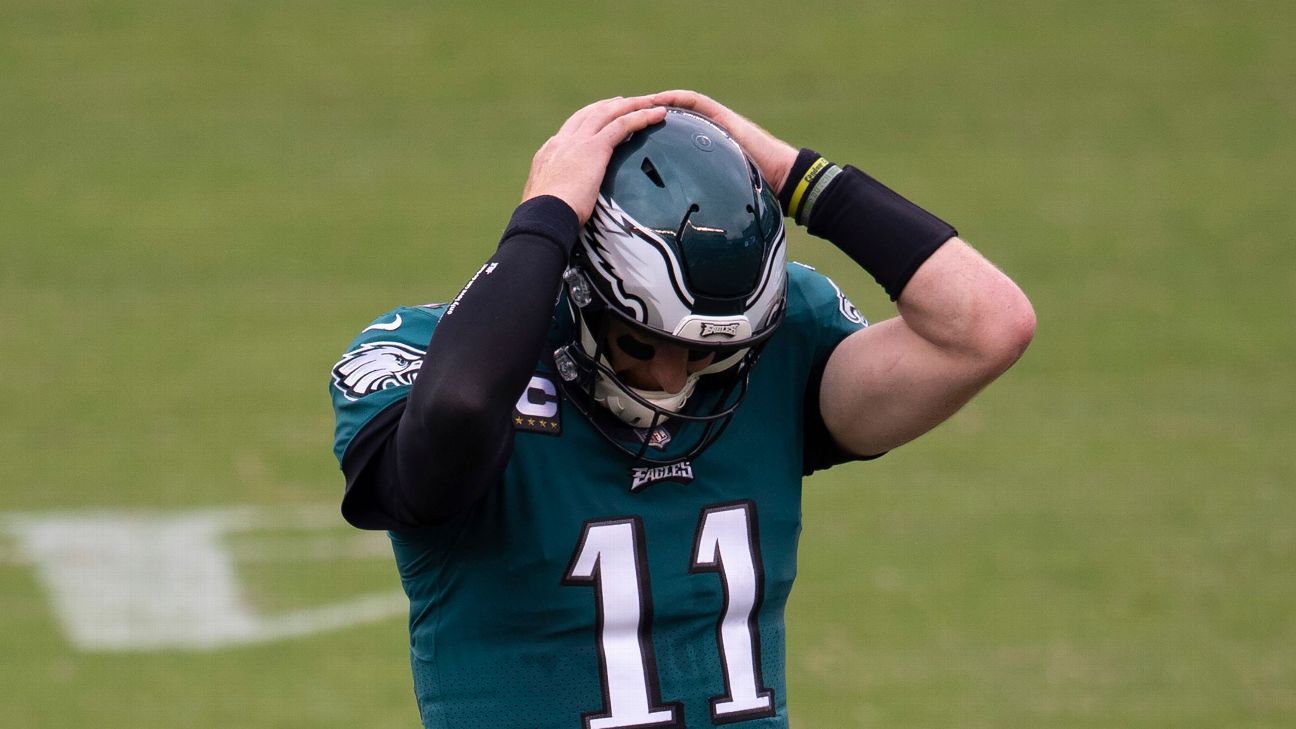 ORLANDO – They say that trust guarantees 50 percent of success and when it disappears, we see precipitous falls that are sometimes difficult to explain.

Let’s give it a try with Carson Wentz, who went from MVP candidate and more than promising future to a mentally “broken” quarterback.

The 2017 season was simply extraordinary for the Philadelphia Eagles quarterback. Wentz threw 33 touchdowns against just seven interceptions. His mobility, his arm and his good decisions were the main reasons why he was one of the great candidates for MVP and led the Eagles to an 11-2 record before suffering a torn cruciate ligament in his knee.

One of the few criticisms we had of his play was that he did not avoid contact enough and exposed himself to unnecessary blows.

Then Nick Foles guided Philadelphia to the Super Bowl and while I think we all knew the answer, a question began to be installed in the media: who is the best man to guide these Eagles to success, Wentz or Foles ?

Added to that were rumors that Wentz was not a good leader and did not have the best relationship with his receivers.

Philadelphia, with logic and reason, chose Wentz, but it was there that the Philadelphia quarterback was exposed to his first public questions.

Then he underwent his first changes on the wings. The men he trusted so much and who had been so crucial to his success were gone in the blink of an eye. Their offensive coordinator, Frank Reich, took the job to coach the Indianapolis Colts and their quarterback coach, John DeFilippo, went to Minnesota to be the offensive coordinator.

I understand that the Eagles in general have been a hospital. Last year they didn’t have healthy wide receivers and this year, not only they, but also the ones one could claim are their two best offensive linemen are out of action.

But it is no excuse. The great players overcome the problems around them (see Russel Wilson) and Wentz just didn’t.

Doug Pederson has the West Coast system on offense, based on short, quick passes. Protection is often not the main issue, rather Wentz’s imprecision.

How bad has Wentz been this year?

Wentz is among the worst quarterbacks in the league for completion percentage, passing yards, touchdown passes and passer rating. As if that weren’t enough, he leads the NFL in interceptions and is second in turnovers.

This brings us to another question for which I still don’t have a definitive answer: is Wentz as good as we thought?

In hindsight, his only elite year was 2017 and what separates a top-line quarterback from the rest is consistency – something Wentz hasn’t shown in his first five years in the league.

In English there is a saying that says, “He is pressing.” It essentially means that a person takes unnecessary risks and is affected by pressure; therefore, play without margin.

In the literal sense of the word, “pressing” is to squeeze. There are times when Wentz is even perceived to squeeze the ball too tightly and therefore some of his passes go to the feet of his receivers. It is the sample of a quarterback who does not play loose but under pressure.

I do not know if it is because they have beaten him a lot or because it has simply been difficult for him to deal with popular pressure and negativism around him.

I still haven’t given up on Wentz, but I think it’s time for him to look long and hard in the mirror, because if he can’t overcome these moments of pressure, his poor level shown at this start of the season could be a path only Going.

The Eagles invested $ 128 million in Wentz, who they have under contract through the end of the 2024 season, but as much as they won’t admit it publicly, the Eagles are concerned and I don’t blame them.

I just hope that the fact that Philadelphia returned to victory (I credit Wentz, because he showed character) and leads the worst division in the NFL with just one win, does not remove the team from reality: their quarterback does not play well at all. and it has been a long time since he has.

As usual, I leave you with THE PLAY OF THE WEEK, courtesy of Brandon Aiyuk, who already at Arizona State University showed us his ability to jump fences, or in this case, human beings.

As I always say, it is never good to play every game. In other words, there are some that are best missed. So I decided to add this section to showcase my six favorite bet line teams. Opinions are welcome, since the idea is to add an attribute that is beneficial to readers. The order of the teams is not accidental and the predictions do not affect the total statistics.

There are many of us in this type of competition. In this case, the bet line does not matter. Just don’t repeat any equipment throughout each week. Of course, these forecasts will not affect the total statistics either. In parentheses, the teams chosen so far.

I have always said that I am not a fan of teasers, since they come from the word tempt and are called “sucker bets”, but, at the request of several of the readers, we added this section. Here, as there are three teams, the line is modified by 6 points, but you must hit all three to collect.

Below, I name the three teams with the altered lines in parentheses.

At the request of several of the readers, we include an entry and exit match for each week.

Total statistics (With + Without + Teaser + Registrations and Discharges): 88-50