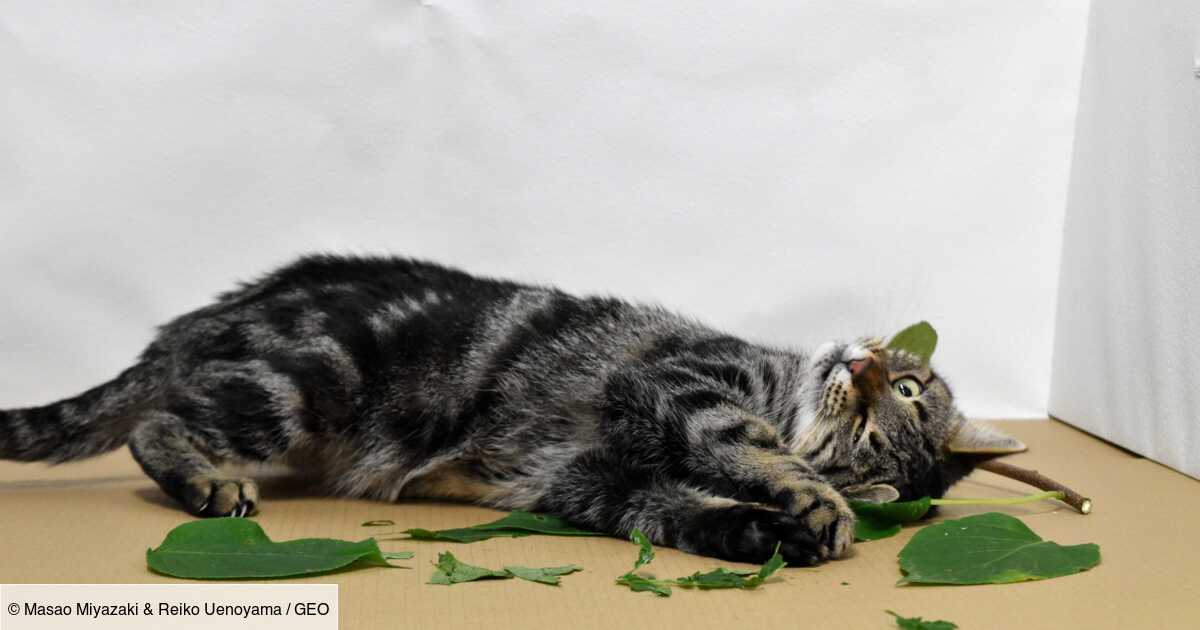 Nepeta cataria from its Latin name, or “catnip”. Cat owners are familiar with this plant, not to be confused with mixtures of seeds (barley, wheat and rye) also called “catnip” – and only endowed with digestive properties.

The real catnip, on the other hand, provokes the excitement of most tomcats, irresistibly attracted… to the point of rolling around in it without moderation, even licking it or chewing it – but generally without swallowing it. Ditto for the “matatabi” (silvervine‘silver vine’ in English), an essence of Asian origin, with a similar effect but even more powerful.

⋙ In Germany, cats confined to protect a species of bird

In a previous study, researchers from the University of Iwate and the University of Nagoya (Japan) had shown that felines, by coating their coat with the substances contained in catnip or matatabi, benefited of protection against tiger mosquito (Uenoyama et al.2021).

This time, the scientists of this team wanted to verify whether the behavior of cats could modify the release of repellent substances by plants.

Their study published in the journal iScience (14/6/2022) suggests that the behavior of cats would increase the protective effect of plants against parasites. In fact, when felines roll around in catnip (or in matatabi), they damage the plant, which then releases larger quantities of insect repellent.

“We found that physical damage (folded, torn or crushed sheets, editor’s note) caused to the plant by cats favored the immediate emission of all iridoids, which were up to 10 times higher than those of intact leaves“, explains Masao Miyazaki, researcher in ethology at the University of Iwate and lead author of the study, in a communiqué.

⋙ Did cats disappear from North America for 7 million years?

An impact on the quantity of repellent, but also on the composition of the mixture diffused by the leaves, at least in the case of matatabi. “Nepetalactol makes up over 90% of total iridoids in intact leaves, but this percentage drops to around 45% in damaged leaves, while other iridoids increase dramatically“, notes the researcher.

However, the diversification of substances in the damaged grass increases the repellent power of the plant against mosquitoes at low concentrations, according to the authors of the study. “The mixture of modified iridoids corresponding to the damaged leaves promoted a much more prolonged response in cats“, remarque Masao Miyazaki.

To dissociate the effect of chemicals from other aspects of the plant, the team put cats in front of bowls containing only these molecules. “Cats show the same reaction to iridoid mixtures and natural herbs except for chewing“, observes the ethologist. “They lick the products on the plastic plate, and they rub and roll on it.“

Even when the bowls were covered with a perforated plastic lid, “the cats continued to lick and chew, even though they could not come into direct contact with the chemicals“, continues Masao Miyazaki. “This means that licking and chewing are instinctive behaviors triggered by olfactory stimulation.“.

However, the study could not explain the molecular mechanism involved in the effect of these chemicals on cats and mosquitoes. The authors refer to a recent study which identified a cellular channel, TRPA1, as the main mediator of the repulsion exerted by nepetalactone in mosquitoes (Melo et al., 2021). However, this channel is not involved in the perception of odorous compounds in mammals.

Furthermore, while it is possible that the behavior of cats may have evolved through natural selectionthat is to say that the felines capable of perceiving iridoid substances and showing excitement in the face of catnip would have had a reproductive advantage, being better protected against biting insects, the study does not allow cannot conclude with certainty.

The Japanese team would now like to determine which gene is responsible for the domestic cat’s reaction to catnip and matatabi. “Our future studies promise to answer the remaining key questions, namely why this reaction is limited to feline species, and why some cats do not react to these plants.“, says the lead author.

The video of a man helping a kitten… but not only, goes viral!

Legally, what do you risk if you feed a stray cat?

Samuel L. Jackson is going on reshoots this summer for Secret Invasion and The Marvels

Literature: the Orange book prize in Africa for the Tunisian Yamen Manaï