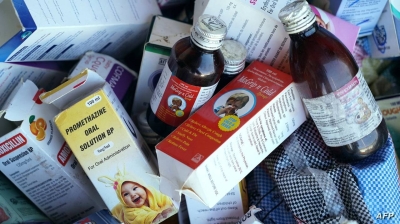 Al-Marsad Newspaper – Agencies: An Indian cough medicine intended for children sparked a state of fear and anticipation after it killed nearly 70 children in The Gambia, in light of the ambiguity about the possibility of its “leakage” to Arab countries, amid medical warnings about dealing with the “deadly drink.”

The Gambia government announced on Friday that the number of child deaths due to acute kidney injury believed to be linked to an Indian-made cough syrup has risen to 70.

A presidential statement said the Gambia was also investigating the deaths and this week set up a new investigative committee to deal with them, according to “Reuters”.

It turned out that the drug was manufactured by “Maiden Pharmaceuticals” based in New Delhi, which has since closed one of its factories in northern India while health authorities are investigating the matter.

On Wednesday, authorities in the Indian state of Haryana halted the production of cough syrup, after a report by the World Health Organization said that the drug may be linked to the deaths of dozens of children in The Gambia.

“Secondary Vocational College”‘s biggest nightmare is over, Mr. Pie: It takes a lot of battle to grab this 1 victory-Free Sports