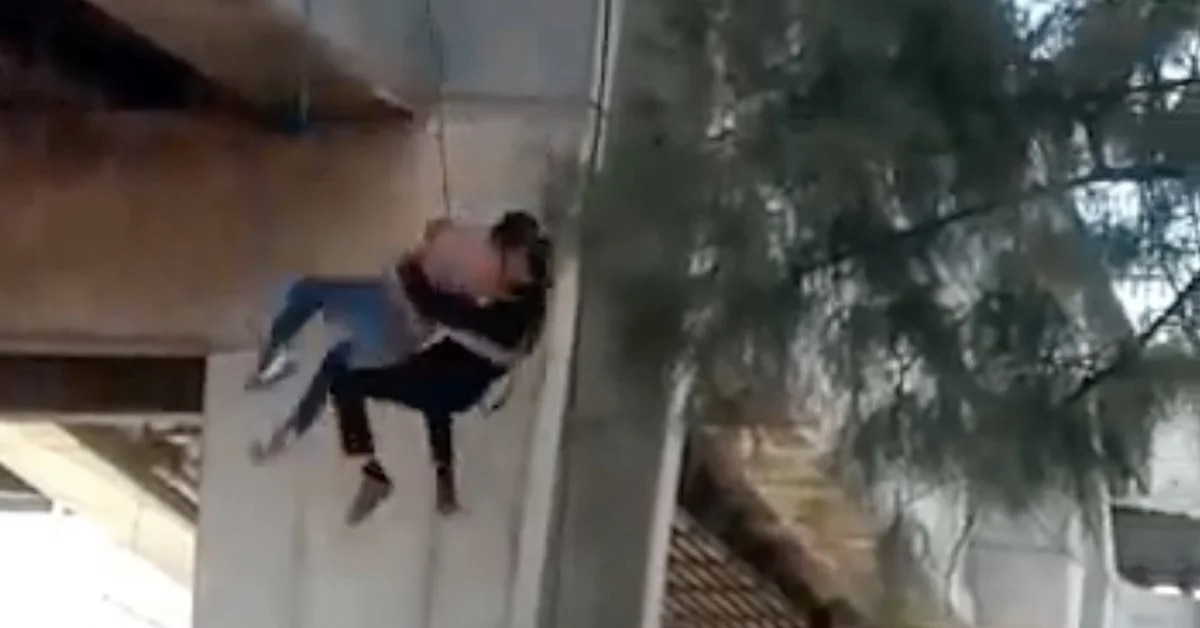 On the afternoon of this Wednesday, January 26, an element of the Secretariat of Citizen Security (SSC) of Mexico City performed a heroic action by rescue a man who was on the ledge of an elevated transfer at the Pantitlán station, corresponding to Metro Collective Transportation System (STCM).

Unfortunately for the officer, identified as Wilber EscalanteAt the moment of descending, the rope that the two people were holding on to broke before reaching the ground, causing them to hit the asphalt of Río Churubusco avenue.

The policeman protected the 27-year-old with his body, who allegedly sought to attempt against his own life, for which Wilber received all the impact on his body when he fell and received a hard blow to the head, which according to the bulletin provided by the SSC, caused a grave head trauma.

The heroic rescue of a policeman to a young man who wanted to throw himself out of the Pantitlán Metro Videos: Twitter/@tavojeda5 / @OHarfuch

Paramedics from Rescue Squad and Medical Emergencies (ERUM) treated those affected and it was they who gave the first diagnosis, so they transferred the member of the Auxiliary Police (PA) to a hospital for required treatment.

“Paramedics who arrived at the site assessed the 27-year-old citizen, and They pointed out that he did not present any injuries thanks to the fact that the officer protected him with his body; while the uniformed man was diagnosed with severe head trauma, for which he was transferred to a hospital where he will receive the corresponding medical care,” the statement said.

Despite the fact that the impact was not observed in the multiple videos, it was confirmed that officer Escalante had to be treated immediately to treat any type of complication that he suffered in the head. So far it has been reported as stable; however, constant studies are carried out.

The heroic rescue of an officer to a young man who wanted to throw himself out of Metro Pantitlán (Photo: Twitter / @ tavojeda5)

Garcia Harfuch recognized the work done by the element of the Secretariat of Citizen Security (SSC), for which he dedicated a few words to him through his Twitter account:

“Our partner Wilber Escalante of the SSC bravely prevented a man from jumping from the top of a bridge in the #CetramPantitlán; thank you Wilber for raising the name of your great institution and being an example for all of us who work here”, he said.

The incident occurred in the area of Modal Transfer Center (CETRAM) known as a footbridge and that was located on the avenue Churubusco River, cross with Miguel Lebrija, in the colony Adolfo Lopez Mateos of the Venustiano Carranza mayor’s office.

The first to attend the emergency were members of the Auxiliary Police, who received the alert from the Command and Control Center (C2) North, same as they noticed through the video surveillance cameras that a person was outside a pedestrian bridge near the Pantitlán metro transfer.

At the same time they requested medical support and clearance of the road where the person was. Additionally, they joined Banking and Industrial Police (PBI), who carried out tours in the Modal Transfer Center (CETRAM) as part of the actions of the operation “Safe Passenger”. They implemented the traffic cuts while trying to convince the young man to give up his intentions

The official account of Secretariat of Citizen Security (SSC) indicated that, after several minutes of dialogue and noticing that the man was becoming increasingly nervous, “the officers tried to hold him by the shoulders, but due to the awkwardness of the place and the person’s own weight, it was not possible to upload it, while all the police officers kept an eye on their movements.

Metro Line 12: specialists detected new cracks and there are already 115
Metro CDMX: what its stations look like free of street vendors
CDMX Metro: they rescued a comal on the tracks of the Balderas station

Madeleine McCann: they filter the creepy conversation that the alleged kidnapper had with another pedophile | Christian Bruckner | United Kingdom | Portuguese | WORLD