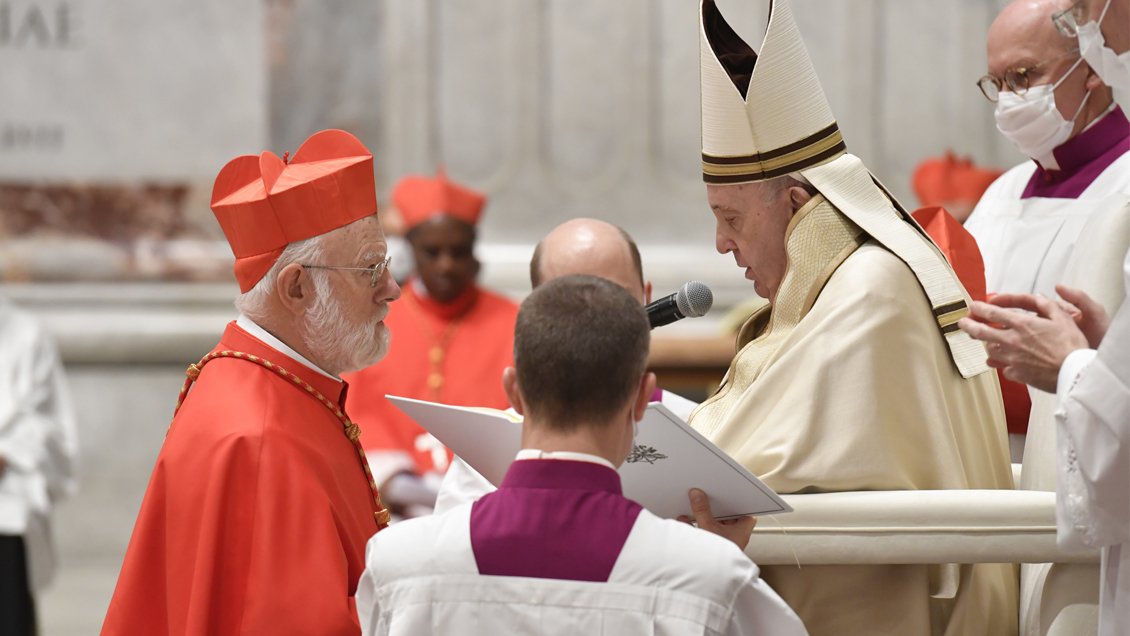 The Archbishop of Santiago, Celestino Aós, was invested by Pope Francis during this afternoon, in a face-to-face ceremony, as the new cardinal of the Vatican.

With this, Aós (Unciti, Spain, 1945) became the eighth “purple prince“of the Chilean Catholic Church and the second named by the Argentine pontiff.

The Spanish Capuchin, who has been archbishop of Santiago since December 2019 and who arrived in this country in 1983, was Pope Francis’ bet for the renewal of the episcopate in this country after the serious crisis opened by the abuses within the Chilean clergy and cover-up by its bishops.

It should be noted that, in addition, the new cardinal, being less than 80 years old, will be able to vote for a new pontiff in the event of the vacancy in the post, at the Colegio Cardenalicio.

[NOTICIA] Monsignor Aós is already a cardinal. This Saturday, the Archbishop of Santiago, Monsignor Celestino Aós, received from the hands of Pope Francis the cardinal’s cap, the ring and the title of the Church that makes him pastor of the Holy See. More info👉 https://t.co/tMS5rDNTKZ pic.twitter.com/aAO7ihru9v

“First, let’s remove that from the prince of the Church, because the cardinals at one time could be princes when the popes were also kings, but they were other times”Aós answered when asked, after the investiture ceremony, if it ever crossed his mind that he could become a “purple prince.”

“The function of a cardinal is to be an advisor to the pope, especially in matters that he entrusts to him; if the opportunity arises to elect a pope, it is the cardinals who are less than 80 years old who choose and then have another responsibility, other services … Circumstances have changed and what I can tell you is that we have to be lucid in our judgments“said the new cardinal, according to a statement from the Archdiocese of Santiago.

The prelate, who was barely 10 years old when he entered the Order of the Capuchin Friars Minor, said that when he entered the seminary, “if you ask me what is the image one has of priests, it was different, although it was Of course, I want to reach this goal because I feel called to do this, and this implies not only the wish of a child, which is a whim at one point, but which will come true later. “

THE NEW MEMBERS OF THE COLEGIO CARDENALICIO

Although it was suspected that the ceremony was not going to take place in person due to the high rates of contagion from Covid-19 In Europe, Francis today appointed 13 new cardinals, nine of them who will be able to participate in a conclave, in a celebration with only a hundred faithful distanced due to the pandemic.

In addition to Aós, Francisco also awarded Mexico by naming the emeritus bishop of San Cristobal de las Casas Felipe Arizmendi Esquivel, who will not be able to participate in a conclave after having exceeded 80 years.

But with this new purple, Mexico will once again have seven cardinals after the death on August 19, 2019 of Sergio Obesa Rivera, Bishop of Veracruz.

Among the nine who will be created cardinals and those under 80 are the two new members of the Curia, something that is customary after their appointment: the prefect of the Congregation for the Cause of Saints, the Italian Archbishop Marcello Semeraro replacing the ousted by the pope, Angelo Becciu, and the new secretary general of the Synod of Bishops, the Maltese Mario Grech.

The Archbishop of Kigali, Rwanda, will also be created cardinals. Antoine Kambnada, who will thus become the first “prince of the Church” of this country so hit by wars and famine, and the Italians, the Archbishop of Siena (Italy), Paolo Giudice, and to the custodian the convent of Assisi, Mauro Gambetti.

Among those over 80, former Vatican nuncio and observer at the United Nations, Silvano Tomasi; to the preacher of the Pontifical House, Raniero Cantalamessa, and the former director of Caritas in Rome and parish priest of the Sanctuary of Divino Amore, in Rome, Enrico Feroci.

While the Archbishop of Washington, Wilton Gregory, originally from Chicago’s South Side, he became today the first African-American cardinal in the history of the Church.

FRANCISCO’S FOOTPRINT ON THE COLEGIO CARDINALICIO

With this new consistory, Pope Francis continues his work to design the geography of the College of Cardinals with a look at those countries that have not had representation.

With today’s appointments, Francisco will have created a total of 101 cardinals, 73 of which are currently among those entitled to participate in a conclave for the election of the new pontiff.

The total number of cardinal electors, that is, less than 80 years old, is now 128, but it will drop to 121 in the space of one year because seven cardinals will reach the threshold of 80 years.

It should be noted, that three of the new Italian cardinals appointed today, Gambetti, Cantalamessa, Feroci, are not bishops, which is an unusual choice and which shows Francis’s intention to really reward all who deserve it.

At the continental level, the geography of the conclave will be 17 cardinals from Africa; 16 from Asia; 24 from Latin America; 13 from North America; 4 from Oceania and 54 from Europe.

But also the cardinals of poor or developing countries (such as Central and South America, Asia, Oceania, Africa) go from 36.5 to 46 percent.

With Bergoglio, countries that had never had a cardinal now have a representative. In addition to those named today from The Central African Republic, Brunei and Rwanda, in the past created cardinals from Haiti, Dominica, Burma, Panama, Cape Verde, Tonga, Bangladesh, Papua New Guinea, Malaysia, Lesotho, Mali, Sweden and Laos, El Salvador and Luxembourg.