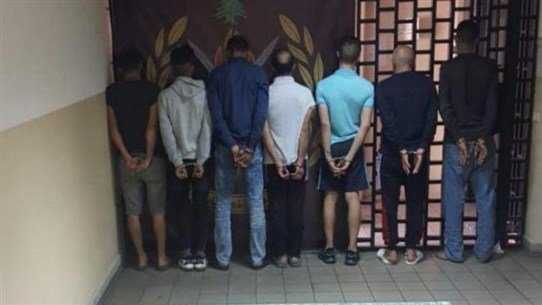 Central – The patrols of the Information Division of the Internal Security Forces were able, as a result of the intensive investigations and investigations, to reveal the identities of members of an organized network, including those who transport drugs from the Bekaa to Beirut to distribute them to the promoters who, in turn, promote them within the Mount Lebanon Governorate, and the identities of some of their clients were also identified. And they are all of:

NS. p. (born in 1979, Lebanese) Distributor
NS. j. (born in 1960, Lebanese) Distributor
NS. s. (born 1987, Egyptian) merchant and promoter
NS. s. (born in 1992, Lebanese)
p. NS. (born in 1988, Lebanese)
NS. Dr.. (born in 2000, Syrian)
NS. s. (born in 2005, Syrian)
After careful monitoring and control, the Division’s patrols carried out tight ambushes and raids, which resulted in the arrest of the first in Mar Mikhael, who was in the process of transporting drugs from the Bekaa to Beirut for distribution to promoters, the second in Furn El Chebbak who was promoting drugs on foot in Mahalla, and the third, fourth and fifth in The localities of Furn El Chebbak and Dekwaneh, and the last two in the locality of Bourj Hammoud, on board a motorcycle that was seized.

The inspections resulted in the seizure of a large quantity of drugs intended for promotion, including cocaine, hashish, salvia and crystals, in addition to cell phones and sums of money..

By interrogating them, the first and second admitted that they transported quantities of drugs from Baalbek to Beirut and handed them over to the promoters, and the third confessed to trading and promoting drugs about four months ago in the locality of Furn El Chebbak, and that he obtained them from the aforementioned distributors..

The rest admitted to taking drugs. And the legal requirement was carried out against them, and they were deposited with the seizures to the competent reference, based on a reference to the judiciary.