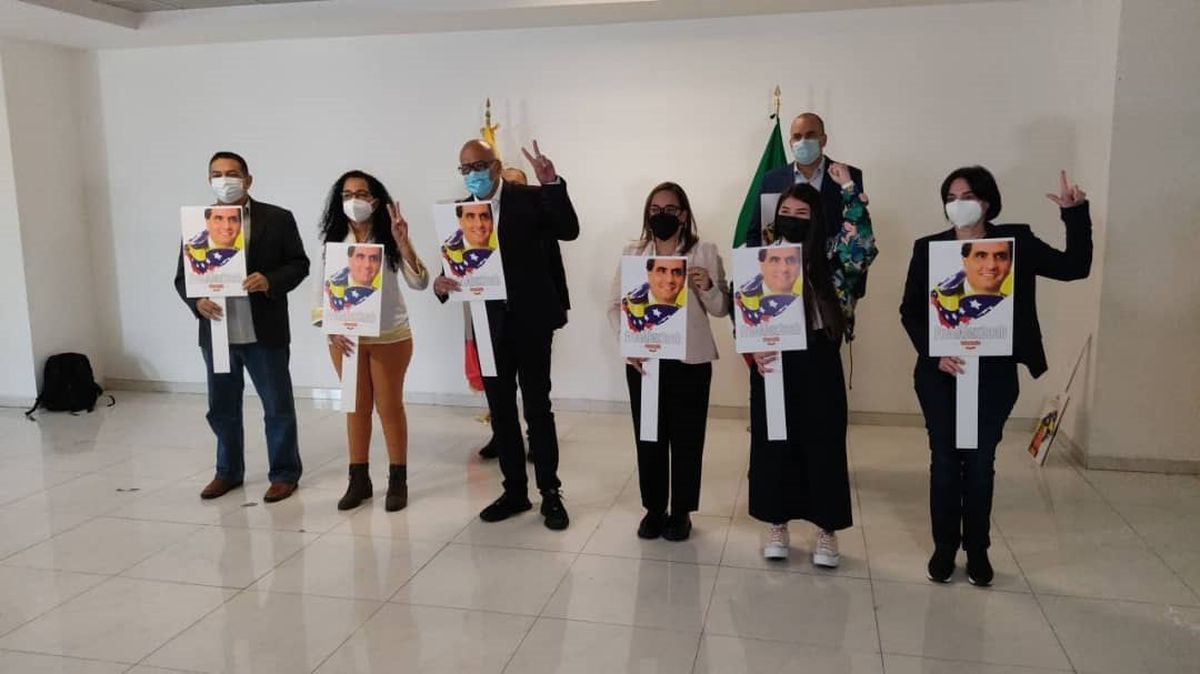 Carrying signs with the legend “Free Alex Saab” finally the second round of negotiations on the Venezuelan crisis This Saturday afternoon began in Mexico City with the arrival of the members of the Bolivarian Government delegation. The round of talks began a day late, around 2.30 in the afternoon local time, when the team led by Jorge Rodríguez appeared at the hotel, thus dissolving the prevailing suspense around this new round of talks.

The meeting was scheduled for Friday, but Nicolás Maduro’s delegation delayed his arrival one day in protest and did so by showing staunch support for Colombian businessman Alex Saab, who is awaiting extradition to the United States in Cape Verde. The Government of Venezuela, which has requested the incorporation of Saab to its delegation, is trying to stop the supposed figurehead of Maduro from being subjected to US justice. Precisely the United States ambassador to Venezuela, James Story, has been the trigger for another of the criticisms of Chavismo. The US diplomat said Thursday that his country would be willing to relax economic sanctions against the Maduro Executive if there are “changes” towards the democracy, which was considered by Rodríguez as interference. “This statement by Story insults the Dialogue Table in Mexico, but above all it insults the delegates of the Unitary Platform [oposición], to whom he seems to give orders. The Bolivarian Government will never attend an agenda that tries to impose this character, “he wrote. Finally Rodríguez accepted that despite the rudeness, the dialogue would continue, although the speech has risen in tone in recent hours.

Chavismo has hardened its discourse in recent weeks, accusing the opposition of violating basic negotiation rules and stealing assets from the country as a result of the crisis in Monomers, a Venezuelan public company in the hands of the opposition. The Prosecutor’s Office opened a new judicial investigation against the opposition leader Juan Guaidó, after weeks of accusations by Nicolás Maduro. But he has also requested to incorporate the Colombian businessman Alex Saab, who is waiting in Cape Verde for the extradition to the United States in the Chavista delegation, a move that has introduced enormous noise, and which for some analysts predicts a possible stagnation of the process.

Maduro has come to this new attempt at conciliation promoted by the Norwegians with a single idea in mind: to get more money through the lifting of sanctions and the recovery of control over assets and resources that have been frozen abroad as part of the diplomatic siege that has resulted from its authoritarian drift. From the declarations of the high government on the dialogue it is clear that in this spectrum of concessions it aspires to hold the talks.

Two weeks ago, when the creation of a social table to address the health crisis was approved and the position of defense of the Essequibo was reaffirmed –the disputed territory between Venezuela and Guyana– A topic was left on the table. Chavismo once again insisted that the negotiations lead to the government being able to dispose of the 5,000 million dollars that correspond to Venezuela as part of the special drawing rights (SDR) of the International Monetary Fund.

Since August, the IMF began to distribute these transfers to its members in the midst of the recession that the pandemic has brought, as part of a global financial aid of 650 million dollars (553 million euros). This is a mechanism created in 1969 by the multilateral organization to supplement the international reserves of the countries and prop up global liquidity. In 2008 they helped to revive economies after the global financial crisis. But this year’s allocation, according to the IMF’s own director, Kristalina Georgieva, has been “historic.” “It is the largest SDR allocation in IMF history and a boost of encouragement to the world economy in the midst of an unprecedented crisis,” he said in early August. The contribution means fresh money and does not imply debt, but a rendering of accounts after two years.

Venezuela has been left out of the allocation, for now. However, between September 7 and 8, the Central Bank of Venezuela increased its balances in international reserves without any explanation. From 6,200 million dollars in one day, the country with the highest inflation in the world, hit by a strong economic contraction and with international sanctions, went to 11,300 million dollars the next day. An unusual increase that economists have explained by adding to their balance sheets the 5,000 million dollars of SDR even though they really do not have them.

After years of a tense relationship with the IMF, Maduro is willing to collect whatever money there is, even if it means reversing the political positions of his predecessor. In 2007, Hugo Chávez threatened to get out of the fund, which he often described as an “instrument of colonialism.” “Gentlemen of the International Monetary Fund, bye with you. Venezuela is free, ”the former president once said. Although it never made the exit, it did force the closure of its offices in the country and the withdrawal of its technicians. When the pandemic began, Maduro surprised with an unusual request for a loan to the IMF for another 5,000 million dollars to attend the COVID crisis. The IMF rejected the request, acknowledging that it is not clear who governs Venezuela. If it is Maduro, he was reelected in 2018 in internationally unknown elections, or Juan Guaidó, self-proclaimed interim president in 2019.

The Venezuelan business community has joined the new drive to fight for the IMF’s 5,000 million dollars. In a letter sent to the Norwegian negotiator Dag Nylander, Fedecámaras – the business association – has asked that a mechanism be agreed at the negotiating table to use the funds in the face of the serious crisis that the country is experiencing. The document that was leaked to the media describes the situation of the private sector and the state of prostration of the national productive apparatus. The Government has used it to its advantage to say that there are already agreements to dispose of the funds. The opposition delegation, however, has clarified that there is only willingness to speak on the subject.

But there are other reasons that complicate the access to the turns. Chavismo has been making use of international reserves to cover public spending without any type of control. Since 2004, Venezuela has violated Article IV of the IMF rules, which requires countries to annually receive missions from the multilateral organization to validate their macroeconomic figures on the ground. The Venezuelan Government does not publish or approve before the National Assembly the budget of the nation or the reports and accounts of public bodies since 2016 and the economic indicators come out sporadically with years of delays. With the sanctions, the BCV has run out of correspondent banks that allow it to exchange the SDR for foreign currency. Chavismo also carries the burden of having squandered, in just over a decade, almost a trillion dollars in oil revenues on corruption and mismanagement. The opacity and mistrust play against this injection of capital from reaching the country in the short term.

The economist Ronald Balza is cautious about the use of money orders, given the possibility that they become a blank check. “What is the use of having more reserves to strengthen a currency with an exchange regime that does not work, with a government in default that he will not have access to credits ”, wonders the dean of the Faculty of Economic and Social Sciences of the Andrés Bello Catholic University. For Balza, both the Government and those who ask for the use of SDRs have not raised the priority of spending or presented a plan with a budget for its use. They have simply set their sights on the total of what is available. “We cannot forget that in this country there is hunger and crisis because the money that was there was used very badly,” he adds.

The new round of meetings will initially run until Monday and during it it is planned to discuss the justice system in Venezuela, severely questioned in the second report that the independent mission of the United Nations presented last week. Chavismo has prepared for it. In the last two weeks, it has expressly approved a handful of laws that touch the judiciary, the content of which is not yet known, but which would allow it to channel the discussions in its favor and argue against the serious failings of the judiciary. With the Monómeros situation, the Pequiven subsidiary in Colombia that has now embraced a Colombian rescue plan, added to the inclusion of Alex Saab at the table and the IMF’s special drawing rights, the government will try to keep pace with the negotiations.

The supposed figurehead of Maduro faces extradition amid a glorification of Chavismo, which aims to prevent it from reaching the hands of the United States justice. The businessman pointed out by the US for money laundering linked to the Government of Nicolás Maduro lost the appeal that his lawyers presented to the Supreme Court of Cape Verde in the first week of September, where he has been imprisoned since June 12, 2020. At the moment After his arrest, Saab had a red alert in Interpol, required by the United States justice for money laundering and identified as the alleged front man of Nicolás Maduro. This was the last battle lost by the defense of the businessman, led by former Spanish judge Baltasar Garzón, to prevent his transfer.

Subscribe here to newsletter from EL PAÍS América and receive all the informative keys of the current situation of the region.