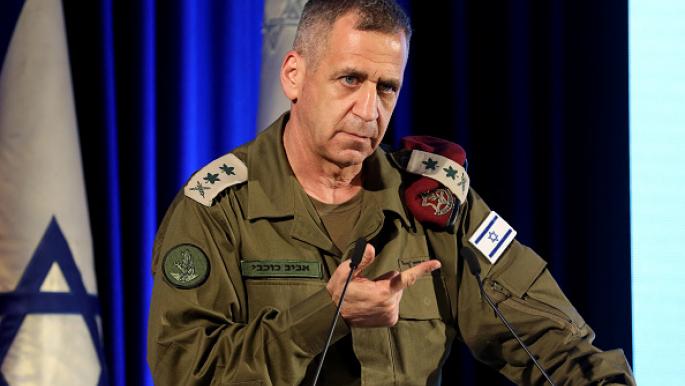 Kochavi: Everything related to the missiles is the target of our attack (Gil Cohen-Magnen/AFP)

Within the framework of the psychological warfare practiced by the Israeli occupation to deter the Lebanese side from escalation, in the wake of It begins extracting gas from the Karish field In the disputed sea between the two sides, the Chief of Staff of the occupation army, Aviv Kohavi, threatened the Lebanese citizens, calling on them to flee quickly before the first bullet was fired in the area. The next war as it breaks out.

During his participation on Sunday evening in the “first Israeli conference to examine the readiness of the home front,” Kohavi said, addressing the Lebanese: “I suggest you leave before the first bullet is fired, as you have never seen an attack like the one we will launch against you.”

He added that the firepower that his army will use in the next war against Lebanon “will be unprecedented and unparalleled.”

Kochavi: The firepower that the Israeli army will use in the next war against Lebanon will be unparalleled

Threatening messages from Kochavi to “Hezbollah”

Kochavi attacked Hezbollah, accusing it of “turning Lebanon into a war zone,” claiming that the party “threatens the citizens of Lebanon through its expansion in stockpiling weapons throughout the country.”

And about the shift in the nature of the combat doctrine that the occupation army will use in The next Lebanon warKochavi pointed out that “the concept of proportionality (in the use of military force) must change to relativity between what we are obligated to do in order to defend our citizens, and (the damage) our attacks will cause the enemy, and this requires us to make a fundamental shift on the conceptual level.”

Kohavi addressed his speech to Hezbollah, saying: “Everything related to the missiles is the target of our attack, as the Israeli army has prepared a bank of targets in preparation for the next war. Thousands of targets, I don’t say 2000 or 3000 targets, but much more than that.”

He added, “Hezbollah, which directs its weapons at civilians, is a terrorist army,” noting that “this requires a qualitative shift in dealing with the values ​​contained in international law related to war.”

Regarding the extent of the strikes that the Israeli home front will receive, Kohavi said: “It is necessary to speak honestly and honestly about the challenges that will face the home front. Many rockets will fall and will cause damage to property and lives, and expectations must be aligned with this reality.”

He continued, “Not 300 missiles will fall here (per day), but a much larger number, and such a war will last for a long time,” adding that “most of the missiles owned by Hezbollah are inaccurate,” while his army’s response “will be with weapons and systems that are characterized by with high hit accuracy.

The development of the work of the Israeli air defense systems

On the other hand, Kohavi explained that his army is “working to develop and expand the work of air defense systems used to counter missiles,” noting that “Israel has signed deals to increase its stockpile of launchers used to intercept missiles.”

He highlighted that the occupation army focuses on developing the work and effectiveness of the “Iron Dome” system and improving its performance, pointing in particular to the investment in the development of missile interception mechanisms carried out by this system.

The “first Israeli conference to examine the readiness of the home front” discussed the extent of the readiness of this front to face the consequences of the outbreak of a third war with “Hezbollah”, as the Israeli military forums estimate that the party fires thousands of missiles daily, including missiles with high accuracy that can hit vital facilities. .

A proposal to resolve the dispute with Lebanon over Karish

In a related context, two Israeli researchers proposed a four-stage plan to resolve the dispute with Lebanon over the Karish gas field.

Shaul Horev, director of the Center for Water Policies and Strategies at the University of Haifa, and researcher at the center, Bani Schaffnair, suggested that Israel declare, in the first phase of the plan, that it is ready to supply Lebanon with gas extracted from Karish unilaterally and for free, emphasizing that This step does not mean acknowledgment of Lebanon’s sovereignty over the place and its ownership of the field.

As for the second phase of the plan, it includes Lebanon’s commitment Returning to negotiations to demarcate the borders of the economic waters Immediately, based on the formula agreed upon in the Naqoura talks in southern Lebanon, in 2020, which stipulated the division of the conflict area of ​​860 square kilometers, so that Lebanon would receive 52 percent of the area and the rest to Israel.

According to the proposal, the third phase of the plan stipulates that the two parties agree on a solution to develop the gas field located north of the “Karesh” field and located in the area called “Block No. 9”.

The authors of the proposal indicated that the fourth stage of the solution plan includes a Lebanese pledge that in the event that gas or oil is extracted from the field in the “Block 9” area, Lebanon is obligated to pay the price of the gas that was supplied to it by Israel in the first stage.