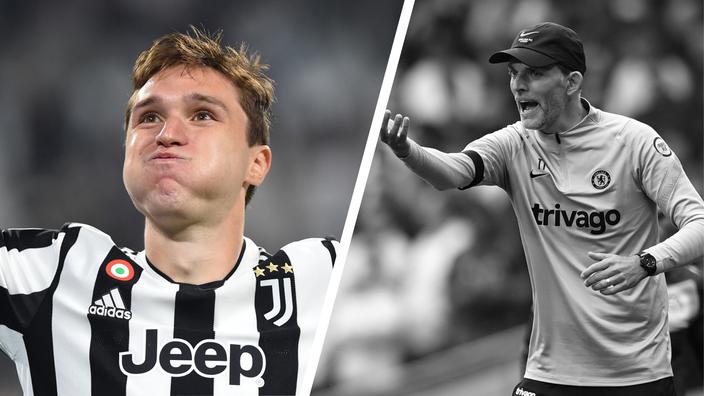 Chiesa’s recital, Allegri’s tactical blow, but also a Chelsea without solution: find our Tops and Flops after Juventus-Chelsea (1-0).

The talent de Chiesa
In the absence of Paulo Dybala and Alvaro Morata, the offensive leader of Juventus is called Federico Chiesa. Revelation of Euro 2020, the Italian international has perfectly assumed his new status, that of a major player. The twirling Turin winger caused a lot of misery for Chelsea’s rearguard. Very close to opening the scoring with a crossed strike at a closed angle at the start of the match (20th), he multiplied the breakthroughs and allowed his partners to bring out the ball cleanly. His speed and fairness on the ball illuminated a relatively dull encounter. He spared no effort and was logically rewarded after the break. The nugget of the Bianconeri opened the scoring with a magnificent strike in first intention, which came to be housed under the bar of Mendy (46th). A saving goal that changed everything. Chiesa came out in the 76th minute, to cheers from Juventus Stadium.

Allegri’s tactical lesson
The tactical battle between Massimiliano Allegri and Thomas Tuchel looked promising, and it did not disappoint. In this distant duel between two renowned coaches, it was the Italian who emerged victorious. If the spectacle on the lawn of the Turin stadium was not breathtaking, the former tactician of AC Milan is no stranger to it. Unadorned but solid and devilishly effective, his team has lived up to the reputation of their coach and their principles of play: a consolidated, compact defense, which left very little space for the London attackers. A performance, especially in the first period, which is reminiscent of the famous “Catenaccio” of the heyday of the Italian championship. But the Bianconeri weren’t content to just defend. On their few offensives, they hurt. Like the saving goal of Chiesa who cold picked Chelsea (46th) and changed the match. The 54-year-old coach completely thwarted the Blues, reigning European champions.

Unrecognizable Blues
Impressive since the start of the season, the European champions have greatly disappointed this Wednesday evening. The recent rout against Manchester City last Saturday has undoubtedly left its mark. Orphan of some usual holders such as N’Golo Kanté, Mason Mount or Reece James, Thomas Tuchel has not been able to find solutions to compensate for their absences. Announced favorites of this shock against Juventus, the Londoners have completely foiled. Upset by the defensive block set up by Allegri, Tuchel never found the solution. The German coach has clearly lost the tactical battle with his Italian counterpart. His completely stereotypical Chelsea achieved a non-match and failed to break through the white and black wall. Having possession of the ball is good, but using it properly is even better. Something that the Blues had all the trouble in the world to achieve. Once led to the score (46th), and exposing himself to the counter-attacks of the Bianconeri, the addition could have been even saltier for Chelsea who has hardly ever been dangerous.

Ziyech can’t do it anymore
The galleys continue to follow for Hakim Ziyech. Since his injury at the start of the season, the Moroccan international is absolutely unrecognizable, he who was so brilliant at Ajax. Excluded from his national team for behavioral problems and sitting most of the time on the Chelsea bench, he is struggling to find his football. This Wednesday, it was nonexistent. His long game, yet considered one of his strengths, was imprecise, as were his set pieces which did not hit the mark. He was suffocated by the midst of Juve, in particular Rabiot, and broke his teeth on the Turin defense, like his partners. Like Romelu Lukaku, the Moroccan was expected and he disappointed. The comparison with the offensive Bianconeri players is unflattering for him. In his defense, he was lugged around the field. Replaced in the 62nd minute, one can wonder if Thomas Tuchel knows how to use it or if Ziyech is really “Tuchel compatible”?