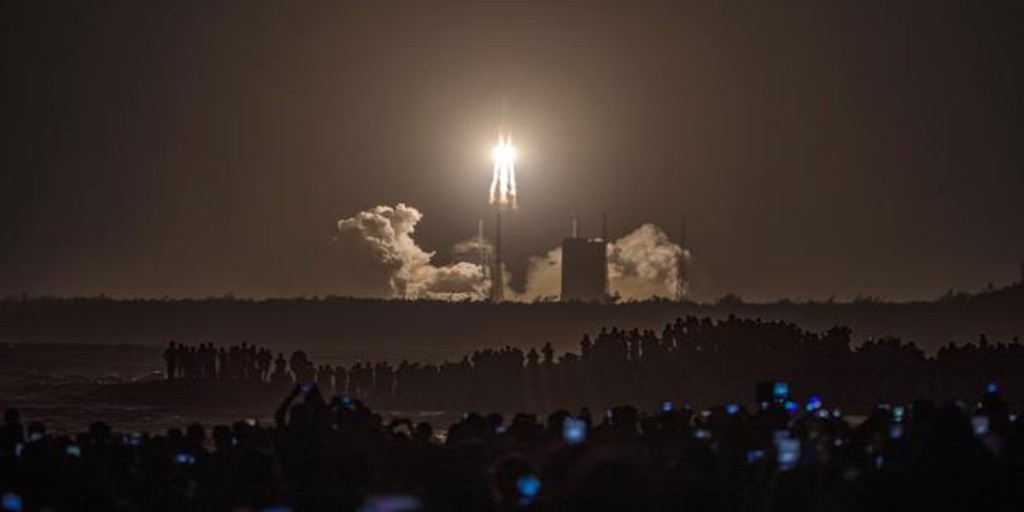 The lunar probe «Chang’e 5» did not disappoint. The launch, the last phase of the mission that China classifies as “three steps,” was a success. The project, of exploration without a crew on board, has planned remove samples from the lunar soil using a robotic system and bring them back to Earth. It is the greatest challenge in the history of the Chinese space agency.

The takeoff took place at 4.30 am on November 24. The “Chang’e 5” is composed of an orbiter, a lander, an ascent and a descent module. Each component must operate autonomously to achieve the success of the mission. Ouyang Ziyuan, chief scientist for one of the toughest known challenges, noted that docking in lunar orbit will occur 380,000 kilometers away and later it will return to Earth at a speed close to that of the universe.

China sums up the entire project as “circumnavigation, fall and return.” To date, the removal of lunar material had only been possible by spectroscopy. This system allows to know indirectly the composition and the chemical elements of the celestial bodies. In this way, a path can be traced from its origin and evolution. Now, if as planned, samples are collected directly from the lunar surface, scientists will have first-hand data at their fingertips that will allow them to develop their research work with greater precision.

The last time elements or lunar rocks were collected was on August 18, 1976 through a probe of Soviet origin (the Apollo missions). Since then, 44 years ago, the experience had not been repeated and never before without personnel on board. Unlike those missions, “Chang’e 5” aims to bring larger and more significant portions of the lunar crust to earth.

Boun Inthabandith, a planetary geologist at the University of Munster in Germany, called China’s ability to stockpile this material “amazing ability.” James Carpenter, a researcher at the European Space Agency in Noordwick (Holland), did not hesitate to warn that this flight will be “a formidable advance for future exploration.”

With the launch of the “Chang’e 5” mission, China has concluded the three phases of its most ambitious project. The samples obtained will serve to advance and facilitate the work of science. The results obtained after the in-depth reconnaissance of the material will allow Chinese researchers to advance their work on the topography, space environment and resource distribution of the lunar surface. In this way, the definitive bases for manned landings can be laid, culminating, in the future, with the installation of a lunar base.

The moon is the closest celestial body to the earth. With the continued expansion of human exploration of the unknown, it will become, for China, the first scale of the human being.

“China achieved great achievements in the field of space science and technology” and “can benefit the world” with the success of the “Chang’e 5” and the rest of “lunar exploration missions”, recognized Giuseppe Reibaldi, scientist Italian and president of the Lunar Village Association.