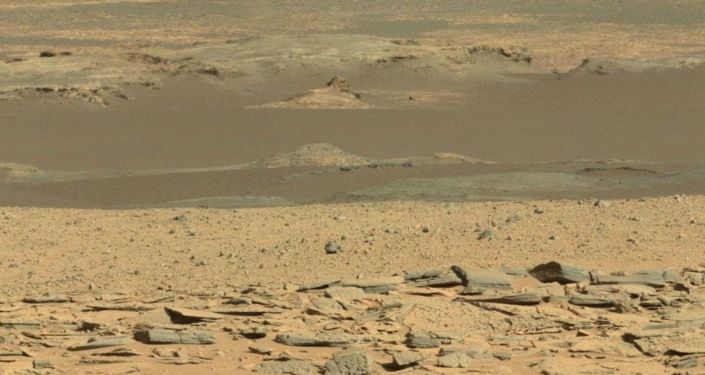 China’s “Zurong” or “Tianwen-1” rover, Friday, sent a set of new images from Mars, including a funny “selfie”.

In order to capture the image, the six-wheeled robot, which landed in May, placed a wireless camera on the ground and then retreated a short distance.

In the image, to the right of the “Zurong” probe, a rocket-powered platform appears, which helped it land on the surface of Mars gently.

The Chinese Space Agency published all the pictures, to celebrate the success of the rover mission.Zurong“.

A “selfie” image of the Chinese rover “Zurong” on the surface of Mars, published by the Chinese Space Agency on June 11, 2021

Chinese scientists hope to get at least 90 days of Martian service from the six-wheeled robot at its site on Utopia Planetia, a vast region in the planet’s northern hemisphere.

The robot is very similar to NASA’s Spirit and Opportunity vehicles from the first decade of the 21st century.

The “Zurong” probe weighs about 240 kilograms, and includes a long mast that holds cameras to take pictures and help with navigation, and 5 additional instruments that will research the mineralogy of local rocks and the general nature of the environment, including weather conditions.

Zurong is also similar to the current American roving vehicles, Curiosity andPerseveranceIn terms of having a laser to stun rocks to assess their chemistry, as well as a radar to search for water ice under the surface.

It is noteworthy that the “Tianwen-1” probe successfully landed on the surface of Mars on Saturday, May 15.

Thus, China becomes the second country after America to succeed in placing its probe on the surface of Mars and operating it for a long period of time.

The Tianwen-1 spacecraft is China’s first independent mission to Mars. Landing a spacecraft on Mars is a very difficult process.