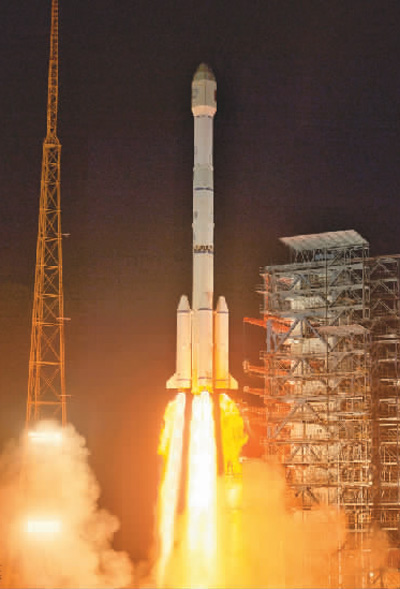 On June 3, the Long March 3B carrier rocket developed by the China Academy of Launch Vehicle Technology affiliated to China Aerospace Science and Technology Corporation took off from the Xichang Satellite Launch Center and accurately sent the Fengyun 4 02 satellite into the scheduled orbit. The launch was a complete success. .Many aerospace enthusiasts have discovered, The Changsan B launch vehicle launched this time has a booster that looks different from the other three — “two bars” on its body and a “yellow hat” on its head.

What makes this booster different? It is understood that this is the “Easter Egg” of this rocket launch-the “parachute landing zone control system” is mounted on the second booster. This system can achieve the accurate landing of the rocket sub-level wreckage, allowing the booster to return to the ground steadily.

Zhang Yipu, deputy chief designer of the Changsanjia series launch vehicle, said that the parachute landing zone control system is installed inside the booster nose cone. After the booster is separated from the rocket, it will fly along an upward parabolic inertia. When it reaches a predetermined altitude, it will help. The control system for the landing zone of the thruster parachute is activated, and two parachutes are popped up successively for attitude control and speed reduction. Finally, the controllable parafoil booster is deployed for maneuvering, and the booster is guided to a predetermined area for landing, thereby achieving rocket assistance. Precise control of the pusher drop point.

Zhang Puzhuo, the overall designer of the umbrella control system, introduced that the use of parafoil to control the landing zone technology was mostly used in the aviation field in the past. For the rocket booster, how to realize the separation and safety of the safety structure when the attitude is unstable after separation. It is quite difficult to open the umbrella and keep the umbrella from being damaged after opening the umbrella.

In this long three-two rocket mission, China completed for the first time a booster landing zone control flight based on 300 square meters (the largest area in the country) of a controllable parafoil, and verified that it has the ability to reduce the landing zone area to 30%. Ability. After the booster is separated from the core stage, the continuous positioning of satellite navigation under high dynamics is realized, and various key actions are performed at a predetermined altitude. In the end, under the action of the parafoil, it flew to the target maneuver point according to the predetermined homing strategy, and the test was a complete success.

Hu Wei said that this is the heaviest rocket detachment in the world that uses parafoil control to successfully return to its home. The test has obtained all the flight data of the landing zone control system, which is for the subsequent application of parachute landing zone control technology engineering and the safety of the rocket debris landing zone. The improvement provides an important reference.

It is understood that the booster parachute landing control system used in this launch was developed by the General Design Department of the Rocket Academy, and the parachute system was developed by the Beijing Space Electromechanical Research Institute. In terms of the control technology of the rocket separation body landing zone, the Rocket Academy has successively broken through the first-stage grid rudder landing zone control technology and the booster parachute landing zone control technology, laying a foundation for the future realization of new technologies such as sub-level controllable recovery and vertical return. An important technical foundation.