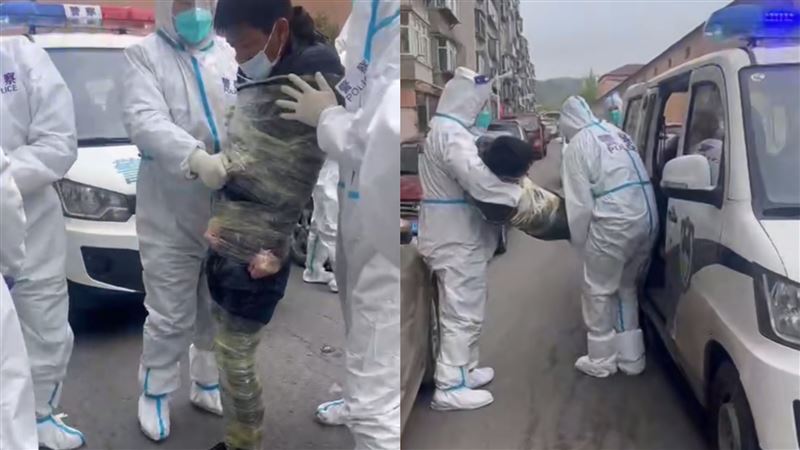 Shanghai, China has been closed for more than a month, and many unimaginable situations have continued to unfold. On May 1, an “undead old man” was put into a body bag and almost cremated in the Shanghai Welfare Institute. The outrageous incident is not only an exaggerated incident in Shanghai , and now it has been revealed that a man was “taped into a mummy” by the police on the road.

On the 7th, an exaggerated clip was circulated on Weibo and Twitter. From the video, it can be seen that 4 or 5 Chinese police officers in protective clothing used Scotch tape to tie a man in a black coat into a mummy. The neck to the ankles were tightly bound with scotch tape, and the whole person could not move. The man was then carried into the car. It could be seen that the car was a van police car with the words “POLICE” printed on the front of the car, and the word “POLICE” written on the back of the license plate number. It was indeed an official vehicle.

▲The man was tied into a mummy and got on the police car in the background. (Picture / Retrieved from user 7756208564 Weibo)

Chinese netizens revealed that the incident took place in Dandong City, Liaoning Province, China, and PO writers angrily shouted, “A thin man who is unarmed and who says he has made no mistakes is wrapped with tape into a mummy. The blood is blocked. Who is responsible for the disability? The difficulty encountered in the current social rule of law process is not whether the people abide by the law, but the law enforcers blatantly breaking the law.”

Other Chinese people were also shocked when they saw the picture, “After this epidemic, many people have realized the value of human rights, freedom, and dignity. These can only be guaranteed to the greatest extent under a democratic system.” Where has human dignity gone?”

However, the Chinese police reported on the 7th that the man was a mental patient, and on the 6th, he was unable to go out due to epidemic control, resulting in violent acts. The police received the family’s request for assistance, emphasizing that “with the consent of the family, under the guidance of the community mental illness prevention and treatment doctor, the police took restraint on him to eliminate the hidden danger of violence, and he has been sent to the relevant medical institution for treatment.”

To prevent new coronary pneumonia, you should wear a mask when going out, wash your hands frequently, and implement a physical contact system when entering and leaving public places. If you have suspected symptoms, you should seek medical attention as soon as possible, and take tests after evaluation.

Mysterious hepatitis… two “strange” reasons for its spread among children

3 o’clock heroine Yumecchi, operation has dropped sharply from 3 months ago … Voices of concern about “physiology comes twice a month” confessed in the program | Smart FLASH[光文社週刊誌]