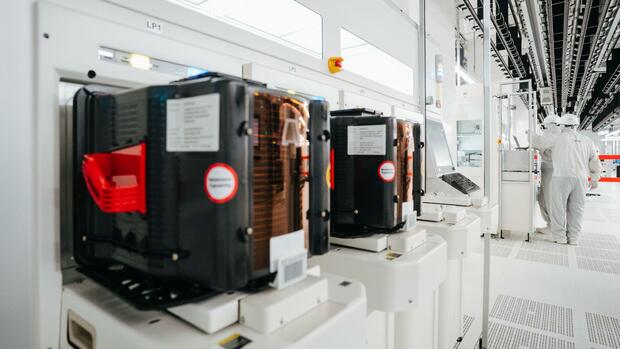 Villach The world craves semiconductors – and Infineon will be able to deliver them more reliably than before. On Friday, Europe’s largest semiconductor company officially opened its new factory for power semiconductors in Villach, Austria. “The timing couldn’t be better, because customers are snatching the chips out of our hands,” said Jochen Hanebeck, Chief Production Officer.

But the buyers cannot really breathe a sigh of relief. Infineon had to allocate some types of power semiconductors in the past few months because the machines are at full capacity. But the Munich-based company is not lacking that much capacity in its own factories. Rather, they get too few goods from the contract manufacturers, the so-called foundries. Microcontrollers in particular are in short supply, mini-computers for very special tasks. “This shortage will last until next year,” warned Hanebeck.

Foundries produce the chips for providers like Infineon who cannot or do not want to afford their own factories in certain areas. The Dax group is dependent on foundries such as TSMC, Samsung or Globalfoundries to invest more. They promised that too. But it will take months before new machines are installed. Additional works will be ready in two to three years at the earliest.

Nevertheless, the new factory in Villach goes into operation at exactly the right time. Because chips are in demand like never before – including power semiconductors. The digitization surge associated with the pandemic is causing an undreamt-of boom in demand. The bottlenecks are primarily affecting the auto industry, which is able to build fewer vehicles than planned due to the lack of chips.

With order books full to the brim, Infineon’s biggest bet in two decades is paying off, because nothing else is the new building. This was not necessarily to be expected when CEO Reinhard Ploss laid the foundation stone three years ago. At the time, many analysts were skeptical because they feared a downturn in the cyclical industry.

Now the entrepreneurial courage of the group owner is paying off. “Competitors are hesitant to invest. That opens up new opportunities for us, ”Ploss told the Handelsblatt at the time. He should be right. Only now are competitors like ST Microelectronics following suit with their own construction projects.

The DAX group is investing 1.6 billion euros in the factory that was built at an existing Infineon site. In its final expansion, the company aims to generate two billion euros in additional sales per year in three or four years – around 200 million euros more than Ploss had promised in 2018. The two billion correspond to around 18 percent of the revenue forecast for the current financial year.

Ploss needs the new plant if he wants to keep his promises to investors and meet the increasing needs of customers. In the long term, Infineon is expected to achieve an average of nine percent growth in sales per year, significantly more than experts expect for the entire industry.

That is only possible if he massively builds up capacities. For comparison: The annual production volume of power semiconductors possible in Villach is sufficient to equip solar systems that can produce three times the annual electricity consumption of Germany.

In addition, Ploss has to operate the machines more economically than before. Because the operating margin should reach 19 percent in the future. A value that the Group has nowhere near achieved in the past five years and which it will probably not achieve in the current financial year. According to the latest forecast, it should be 18 percent.

Infineon is venturing back to Europe with the new plant. This is remarkable, as the group recently built its new plants in Malaysia. An investment in Europe is still exceptional in the chip industry. Only Bosch recently rebuilt on a larger scale in Dresden. The Swabians invested a billion in Saxony.

Years before the competition, Infineon began producing its power semiconductors on 300 millimeter wafers. The standard is 200 millimeters. That cost the group billions, now it’s paying off. “We have economies of scale, and these are the be-all and end-all in the semiconductor industry,” said Production Board Member Hanebeck in an interview with Handelsblatt.

In the past fiscal year, Infineon achieved 55 percent of sales with power semiconductors. These components account for almost ten percent of the entire chip market; in 2020 it was 46 billion dollars. Power semiconductors are becoming more and more important for many customers because they convert the electrical energy provided into the form required by the consumer.

They are installed in power supplies, in servers, notebooks, medical devices or even in electric vehicles. For example, they are used for frequency converters, i.e. for electronic devices with which the speed of electric motors can be changed electronically. Or for converters in solar power systems. These convert the direct current from the photovoltaic modules into the normal alternating current and feed this into the public grid.

Analysts are currently very positive about Infineon. The semiconductor company is well positioned to benefit from the demand from China, according to Berenberg analyst Tammy Qiu. She expects the share price to rise by a good fifth within a year.

A broad-based surge in demand from consumers and industry is causing bottlenecks in the semiconductor industry and driving a price spiral, says NordLB analyst Alexander Zienkowicz. Since the beginning of the year, the share price has risen by almost a fifth to currently almost 38 euros – the highest level in 20 years. With a price increase of a good one percent, Infineon was one of the biggest winners in the Dax on Friday.

Shareholders need not worry for the foreseeable future: a downturn is not in sight. For two decades it has not gone as well as it did these days, said CEO Ploss.