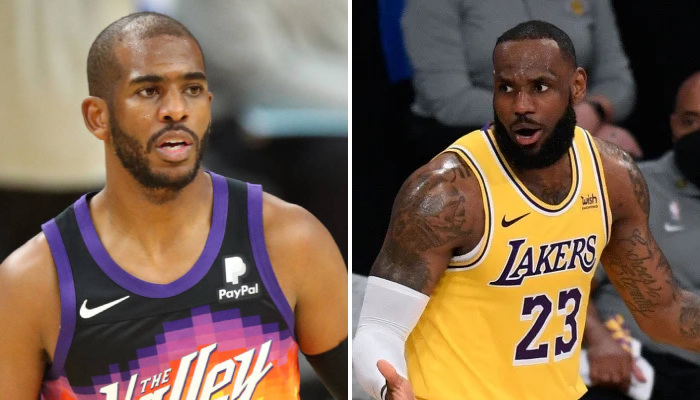 While Chris Paul’s name regularly came up in rumors for a possible transfer to the Lakers, Shams Charania chilled everyone on Sunday night. Obviously, the meeting between CP3 and his great friend LeBron James will not take place.

In the jargon, this is called air conditioning. While Lakers fans have already dreamed of seeing Chris Paul join the California squad next season, Shams Charania told us in his latest newscast that, barring a miracle, it won’t. Here are the explanations of the famous insider:

The Lakers have exhausted their trump card in the Anthony Davis trade which makes a trade for a superstar like Beal or signing a superstar like Chris Paul impossible. The Lakers will have the mid-level exception at their disposal this summer, and it is a far cry from the money Paul will be able to collect in free agency.

Moreover, the Suns do not think for a second of the idea of ​​helping a rival in the Western Conference. For the Lakers, this off-season will be a quest for a third play-maker and creator of shots, and not necessarily a frantic race for a superstar.

You will understand, Chris Paul should not wear the purple and gold jersey anytime soon.

The Lakers in talks about a trade around Kyle Kuzma

As a reminder, the mid-level exception mentioned by Charania will amount, according to Bobby Marks of ESPN, to around 10 million dollars. It is far, very far from the nearly 45 million affected by Paul if he activates his player option, or the probable 25 to 30 million that he will receive if he signs a new contract in a team that has the course for it. ‘to welcome. The trade being impossible because of the refusal of Phoenix to reinforce a rival, the Paul track in LA is well and truly closed.

A disappointment for the Lakers, whose priority is a leader-creator this summer, but not a huge disappointment either, as the path to acquire CP3 seemed complicated. Instead, according to the latest rumors from the hallway, the Angelinos are leaning more into the case of Russell Westbrook. Again, it is financially strained, but a deal could be mounted if Bradley Beal decides to leave and the Wizards fall into the midst of rebuilding.

If this lead also fails, Los Angeles will target players a hair below. We think for example of Kyle Lowry, free this summer, but also of Ricky Rubio, excellent with Spain for a few weeks, experienced, and who has fans in the Californian front office according to Adrian Wojnarowski.

LeBron James and Chris Paul will not end up in the same tunic, except perhaps during the All-Star Game. File too complicated, the Lakers move on.