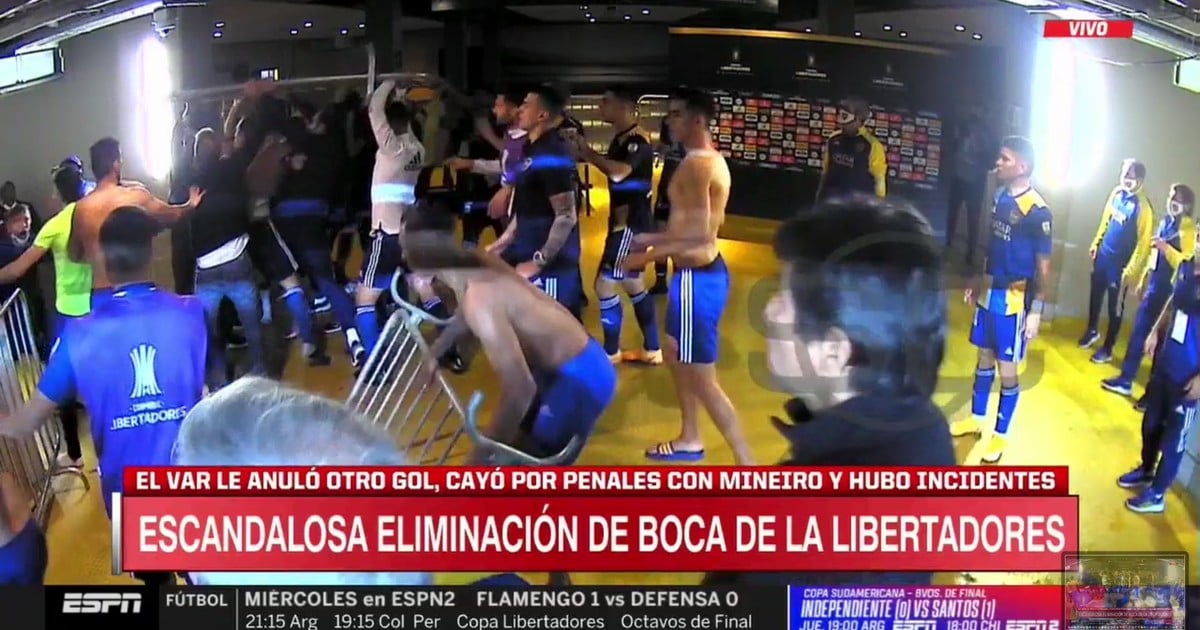 This is the chronicle of an announced scandal: “We are going to give them the same treatment that they gave us”Sergio Coelho, the president of Atlético Mineiro, had warned. And his words were fulfilled like a prophecy.

It seems distant, but this story begins on Monday with Boca’s arrival at the Belo Horizonte airport where he flew to face Galo for the rematch of the Copa Libertadores de América round of 16. The Xeneizes managers were ahead of the game and sent the negative PCR certificates that enabled them to travel and enter the neighboring country. However, Migrations of Brazil did not accept the previous analyzes and demanded that the establishment be done again in its entirety. Finally, after almost two hours of delay, the delegation was able to leave the airport to settle in the hotel. Of course, Miguel Angel Russo’s planning had already undergone its first alteration. Bonus track: At night, roaring fires were heard that kept players to sleep.

But the greatest chaos came last night, towards the end of the game when Chelo Weigandt scored the goal that gave Boca the victory, but the VAR decided to cancel it, adding a new chapter to the long history of embarrassments of his short life. It is the spark that ignites the fire in an environment that was already perceived as highly flammable.

Esteban Ostojich, the Uruguayan referee who had directed the final of the Copa América, annulled the goal by “a meniscus” of the knee of Pulpo González that appeared ahead. And what follows is chaos. The emotional memory refers to those old Copa Libertadores matches such as Colo Colo in 1991: in this case there were no dogs biting the protagonists, but Belo Horizonte police fired tear gas at Boca players and Atlético Mineiro’s security attacked them directly.

In this context of madness, Boca players and coaching staff ended up in the middle of a battle. Fernando Gayoso, the goalkeeping coach who had been sent off after the goal disallowed by VAR, was one of the most active. The players who had made their way to the locker room lifted the fences and threw them against the security. Y Marcos Rojo was the protagonist of an image that will be recorded for years: the former Manchester United tore a fire extinguisher from the wall to defend himself against the police attack. An embarrassment.

The bomb explodes after penalties. There the Boca players understood that the series had been an assault. And no one had said “hands up”. Or perhaps that signal was given by the president of Mineiro with his statements: “They will receive the same treatment.” It is worth clarifying that Boca did not treat the Brazilian team in this way. But we are at the final whistle. There the shoving began and the police did not take long to repress. Players run to the locker room and find themselves in a dead end. Some are blinded by gases on the playing field, without receiving assistance.

Some images that describe how overwhelming the situation stand out. Leandro somoza, one of Russo’s assistants who always stood out for his correctness, raises a fence to defend himself and threatens to attack security. What made him react like this? Something that one of the “vigilantes” of the place told him, who wore a bib with the number 145. Somoza threatens to throw the fence over him, but does not let go. TV shows the arrival of Patron Bermúdez and Russo. In his role as leader, the Colombian tries to disperse and calm the spirits. Although in some images he is seen insulting. In another painting, Cascini appears much more removed, as in his days as a player. The locker room hall is filled with tear gas.

When it seems that everything calms down, Cascini is attacked and begins to throw pineapples into the air. Miguel Angel Russo does not know how to react. More players arrive. El Pulpo González, who had the misfortune to appear in the two canceled plays, goalkeeper Javi García and Sebastián Villa. Gayoso returns to the scene, Cali Izquierdoz and Pavón appear in the brawl and that’s when Marcos Rojo grabs the fire extinguisher to defend himself. It is Bermúdez who manages to stop him.

Juan Román Riquelme, who follows the actions on television from Argentina, sees with helplessness how the president of Mineiro, Sergio Coelho, throws a bottle at the Boca delegation. The vice of Boca did not wait and sent a direct message to the Conmebol priests: “We are sad, hurt, we played two very serious games against one of the favorites. They said that Boca was the cuckoo. Boca won both games and was left out. Never seen”JR said on TyC Sports. “It is shameful. What am I going to tell Domínguez and Belloso? They don’t want to charge me for the goals?”.

But that was not the end. When everything seemed to calm down, the Brazilian police knocked on the locker room door and arrested eight members of the Boca squad: Marcos Rojo, Cali Izquierdoz, Sebastián Villa, Zambrano, Javier García, Somoza and goalkeeper coach Fernando Gayoso. What are they accused of? Contempt of authority.

Boca was delayed for more than ten hours. When he saw that the entire squad was not going to be able to return on the flight scheduled for two in the morning, Miguel Angel Russo decided that until everyone was ready to return to Argentina, no one would get on the plane. This morning, the club’s lawyer, Orlando Giménez, and the consul in Belo Horizonte, Santiago Muñoz, were working to unblock the situation so that the delegation could leave the police station. The idea is for Boca to stop by the hotel, before returning to the country this afternoon.