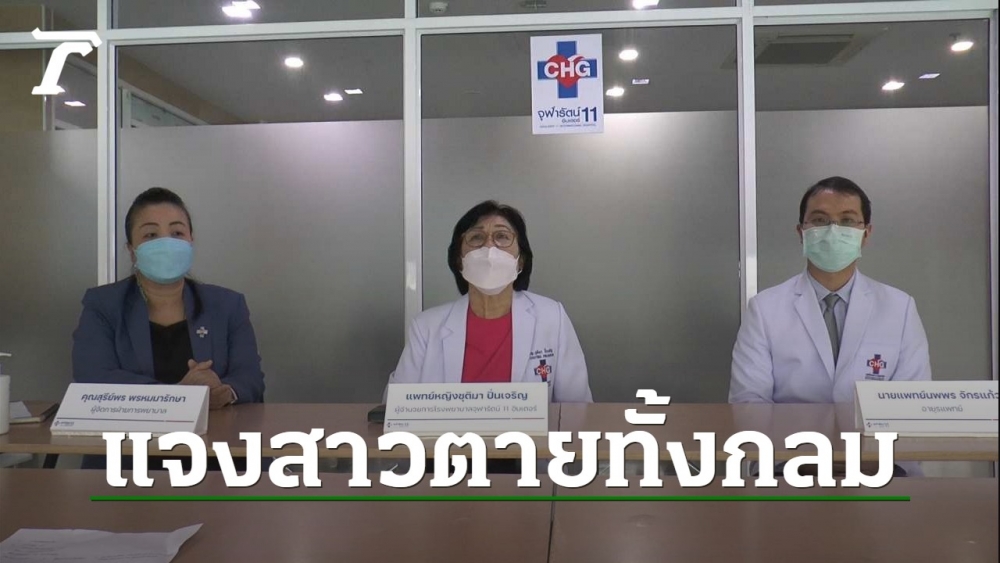 The director of Chularat 11 Inter Hospital revealed that a woman who is 8 months pregnant is infected with Covid-19 and died in the whole round. The hospital treated according to medical principles. Confirm the mother and the unborn child Die from Covid-19 if relatives are ready to explain

On September 25, 21 at Chularat Hospital 11 Inter 185/1 Moo 1, Bang Wua Subdistrict, Bang Pakong District, Chachoengsao Province Dr. Chutima Pincharoen, director of Chulalongkorn 11 Inter Hospital, along with the treating doctor, Ms. Mintra Inaram (Min), aged 27, was a pregnant woman for 8 months and died (death in the round). The process of treating patients since admission until the day of death

Dr. Chutima Pincharoen, director of Chularat 11 Inter Hospital, said that first of all, I would like to express my condolences to the relatives of the deceased. The reason for not having surgery to remove the child from the mother’s womb when still alive Since the child was only 32 weeks old at that time, the gestational age was very young. If surgery is performed, it will affect the mother because she is infected with COVID-19. Lungs were not well and the patient was overweight with a BMI greater than 40 assessed by the treating team at that time and was not suitable for surgery. Should treat the patient to have better symptoms first

But on August 25, the unborn child died. The doctor then analyzed which method would be used to bring the child out. And it must be the best way for mothers. Therefore, the intravaginal method was chosen to soften the cervix. and then give the drug to speed up the vaginal contraction for the mother to give birth to the child by herself without surgery Therefore, the suppository was given on August 26, until August 27, the patient’s symptoms worsened. therefore had to stop giving birth control pills and the patient died that same evening. It is believed that the cause of the unborn child’s death Born from mother sick with COVID-19 Affects the pregnancy and the child, and the mother’s death from the diseaseCovid-19 cause lung infection In the document No. 2.4 has been specified as an English medical term meaning pregnancy. Regarding the removal of the deceased child from the mother’s womb, it can only be done in 2 cases: 1. Dissection for autopsy 2. Dissection for organs to be transplanted which in this case cannot be done the doctor will be at fault and patients dying from COVID-19.

Dr. Nopporn Chakkaew, an internist, said that on August 20, the patient’s blood oxygen levels dropped below 95% from normal people, must be between 98-100%, so the patient was taken to the ICU for treatment. Cure sickness and provide high-pressure oxygen. that time the patient Still able to talk and the unborn child is still struggling normally. Talked to the medical team to assess that Still able to support the patient’s symptoms to improve before continuing with the birth plan. On August 25, the child struggled less. Therefore, ultrasound was performed. It was found that the unborn child had died. As for the cause of the death of the mother caused by COVID-19 cause lung problems The patient’s condition worsened until death.

As for Khun Sureeporn Phrommaraksa, Nursing Manager, said that the death certificate document Hospital issued within the day of death for relatives to bring the body to make merit according to religion Other documents Relatives must inform the hospital and it will take about a week for the documents to be received.