Two very strong explosions rocked the port of the Lebanese capital Beirut on Tuesday, causing scenes of devastation. There are believed to be at least 70 dead and more than 3,700 injured. The Swiss ambassador was slightly injured.

The origin of the explosions that shattered the windows of many buildings and shops for miles around is not yet known. Videos posted on social networks show a first explosion followed by another which causes a gigantic cloud of smoke. According to sources within the security services, explosives were stored in the buildings where the explosions occurred.

According to “preliminary estimates” announced by the Minister of Health, Hamad Hassan, there are at least 70 dead and nearly 3,700 injured.

“It’s a disaster in every sense of the word”, he lamented, questioned by several televisions while visiting a hospital in the capital. “The hospitals in the capital are all full of wounded,” he said, calling for the other wounded to be transported to establishments in the suburbs.

>> The impressive images of the second explosion (from the 10th second):

Quickly arrived at the scene of the explosion, the governor of Beirut Marwan Aboud said that a team of firefighters came to extinguish the fire had disappeared in the explosion. Moved, the man burst into tears in front of SkyNews cameras.

“The explosion took place in the port of Beirut,” said a security source, without providing further details. Local media broadcast images of people trapped under rubble, some covered in blood. Witnesses said they saw dozens of wounded ashore in the port area.

“It’s a disaster inside the port. There are corpses on the ground. Ambulances are taking the bodies away,” a soldier near the port told AFP.

“The buildings shook,” tweeted a resident of the Lebanese capital. “All the windows in my apartment exploded,” he added. The port sector has been cordoned off by security forces, which only allow civil defense, ambulances and fire trucks to pass.

In the vicinity, material damage and destruction is significant. And the sirens of the civil defense sound throughout the city. The windows of many buildings and shops were shattered for miles around.

>> The damage in the streets near the blasts: 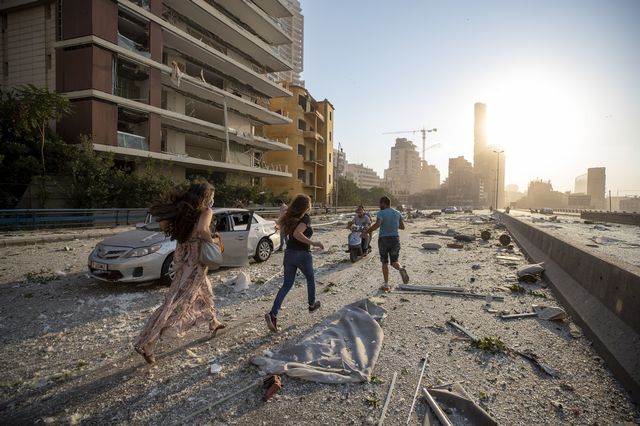 Residents flee the scene of the explosion. [AP Photo/Hassan Ammar – Keystone]According to witnesses, the blasts were heard as far as the coastal town of Larnaca, Cyprus, just over 200 km from the Lebanese coast.

After the explosions, many residents, including some wounded, walked to hospitals in several districts of Beirut. In the Achrafieh district, the wounded rushed to the Hôtel Dieu hospital. In front of the Clémenceau medical center, dozens of wounded including children, sometimes covered in blood, are waiting to be admitted.

Condolences and offers of help

Many countries offered their condolences and offered aid to Lebanon on Tuesday. France has declared itself to be “alongside Lebanon” and its President Emmanuel Macron has announced the delivery of “French aid and resources” to Beirut.

The President of the National Council Isabelle Moret and the President of the Council of States Hans Stöckli expressed “their deepest condolences to the victims and their families”, in a joint tweet. They said they were “deeply shocked by the two explosions in the port of Beirut”.