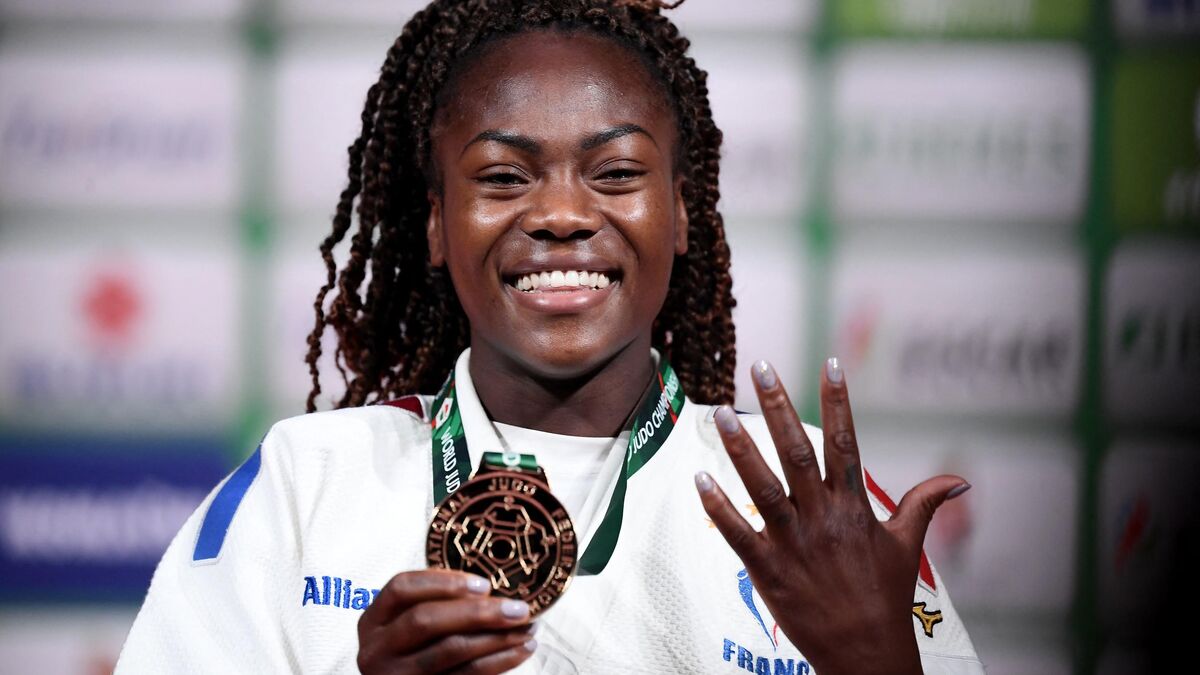 Congratulatory messages poured in from everywhere. Even the President of the Republic went there with his tweet. By winning her 5th world champion title on Wednesday, Clarisse Agbegnenou, with disconcerting ease, moved to another planet.

On July 27, at the Tokyo Budokan, the temple of Japanese judo, the 28-year-old young woman will tackle Olympic gold. And we do not see very well who could prevent him from achieving his dream, so much the Ile-de-France seems to have been walking on water for 4 years. “I do not know if I would have this medal which I miss in Tokyo, I preferred to go for the fifth world first, before thinking of the missing star”, proclaims Clarisse Agbegnenou. She admits “on the right track”, the five-time world champion is perfectly set on her chart.

Five years already, which she is building step by step the rest of her story, which began in tears in Rio. This August 9, 2016 in Brazil, she was already dreaming of Olympic glory, but the immobilization of the Slovenian Tina Trstenjak was fatal to her. As soon as she got off the tatami mats, she promised herself to come back stronger to Tokyo. “I was waiting for gold so much that I never got used to this silver medal. It is hidden somewhere at home, I never look at it, it’s a bit as if I had misplaced it ”, admitted to us a few months later the member of Champigny (Val-de-Marne).

As announced from the start, 2021 will be the year of all possibilities and this stage in the du championship was essential for my final goal mon

She took her destiny in hand, posing with her team one by one the stones with intelligence. To refine her preparation, she works with a yoga teacher, takes jujitsu, kickboxing and mobility classes. Each signature with a sponsor is thought out. “It has to make sense to me, that we can tell a story,” she sums up. It lends its image to large companies – le Coq sportif or Allianz – but also to eco-responsible French start-ups, such as Family self care or Réjeanne.

Clarisse, candidate for the role of flag bearer of the tricolor delegation in Tokyo, is also committed. So that the rules are no longer a taboo (she created her line of period panties), for the media coverage of women’s sport, for gender equality or for premature children. She who, 28 years ago, was born several weeks early and had to undergo serious kidney surgery which left her in a coma for several days. The doctors had advised her parents to unplug her, Clarisse clung to life. As she now clings to her Olympic dream. “I feel like a normal person, who dreams of becoming an Olympic champion and a life coach. “

This year, she followed a course at HEC, advancing her end of studies thesis at the same time as she prepared her quest for the absolute. Normal, “Gnougnou” is undoubtedly. She loves bags and heels, admits a weakness for ribs cooked by her mom on Sundays, likes to put color in the small dishes she prepares and fall asleep watching the cartoon Baby Boss.

She is “normal”, but she has something more. The past few months have not necessarily been easy. “The postponement of the Tokyo Games was very difficult, a blow of the hammer. »Clarisse had blues. On several occasions, she has found refuge on Reunion Island, where she “captures the positive vibes. “Haloed since Wednesday with a fifth planetary title – only Teddy Riner has done better in the history of French judo – she is ready for Olympus.